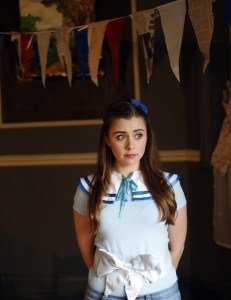 How to compress the magic, madness and – yes, wonder – of Alice in Wonderland into an hour long performance? And in a library, too? Blackshaw Theatre Company have set their brains to this thorny problem, and solved it in creative, imaginative and seemingly effortless style. Impressively, most of the essential elements of this classic tale are present.

Alice is still looking for her cat, Dinah. The White Rabbit is still late and terrified. The Cheshire Cat grins, The Hare and the Hatter take tea, and the Queen Of Hearts stomps around looking for her missing tarts and trying to execute everybody. Battersea Library itself is antique and beautiful, the rows of bookshelves making an appropriate setting for this literary adaptation, and creative use is made of the space. The story begins at the front desk, where Alice attempts to placate a grumpy librarian, then moves through a corridor/rabbit hole to the library proper where the action takes place all around us; characters rush between the desks, a garden appears then disappears at the back of the room and a truly delicious looking tea, complete with floating cat-head, is spread on a long table at the front.

Although this is a production aimed at children the text remains largely unchanged, and as a result none of the entertaining lunacy is lost. The Walrus and The Carpenter is performed in full by the Tweedles and Alice using hand puppets, and the climactic court scene is as chaotic and alarming as it was in the book. The children in the audience seemed utterly entranced, running backwards and forwards so as not to miss any of the action and listening intently to the characters. The costumes and props clearly added to the fascination; inventively cobbled together from what look like household items and finds from a jumble sale, they are wonderfully colourful and eccentric.

Look out for the Queen’s quick change at the end – how on earth did “she” do that?

The acting is also of an incredibly high standard. Bright and bouncy yet never patronising, the actors walk that narrow tightrope between the world of children and adults with admirable precision. A couple had been roped in at the last moment due to illness in the cast and still managed to fit in seamlessly, a truly impressive feat. The whole performance buzzed with energy, fun and joy.

When first we arrived at the front desk, for the librarian scene, we were invited to sit on the floor. Only the children did so; the adults stood uncomfortably upright or leant self-consciously against bookshelves. When we were taken back to the front desk for the final scene we did not wait to be invited; everybody immediately sat on the floor and gazed up, wide-eyed and eager to see what would happen next. A true testament to the little bit of magic that Lewis Carroll, and Blackshaw Productions, brought to our lives. Thank you for that.

Alice has lost her cat, but when her search leads her to the library, Alice discovers more than she could ever imagine. Fall down the rabbit hole with Alice at this year’s Wandsworth Fringe, as her world is turned upside down in this new adaptation of Lewis Carroll’s classic tale at Battersea Library. Suitable for ages 4+ (and plenty of jokes for the grownups).

Written by Richard Stratton and directed by Ellie Pitkin. The full cast can be found here:
http://blackshawonline.com/blog/news-alice-in-wonderland-at-waf-2015/

Like most people, I think, I often have mixed feelings about a show I see. Occasionally, though it is rare, there will be a production where … END_OF_DOCUMENT_TOKEN_TO_BE_REPLACED

“The times they are a-changin'”, as Bob Dylan put it - and as a deceased woman’s grandson (Phillip Jones) returns home to attend the funeral, the … END_OF_DOCUMENT_TOKEN_TO_BE_REPLACED

It’s not often that the entertainment tastes of an intellectually snobby middle-aged woman and an action-mad 10-year-old boy align perfectly, but … END_OF_DOCUMENT_TOKEN_TO_BE_REPLACED

Notre Dame is the latest digital production by Threedumb Theatre, live-streamed from The Space in Canary Wharf, London and directed by Stephen Smith, … END_OF_DOCUMENT_TOKEN_TO_BE_REPLACED