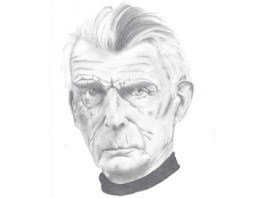 We are back in the Royal Court Theatre and it is the early 1970s. Two Samuel Beckett plays are coming on – Krapp’s Last Tape and Not I. More to the point, Beckett is coming in. Here he is, watching the rehearsals, his eagle face up high in an eerie of the masonry.

He isn’t happy. The actor playing Krapp is altogether too buoyant, too publicy pleasing to serve this dark and ruminative role in the way its author would like. As anyone who has seen it will testify, the deceptively brief piece catches its character in the middle of his obsessive self-chronicling; each year he prepares to record another tape about his life by spooling through his previous efforts. The man appears to be in constant, rigorous negotiation with his memory.

Actually, we are not back in the Royal Court at all, but thirty miles south-west In Guildford, where an engrossing and many-layered play called Beckett’s Last Act is being produced in the Yvonne Arnaud Theatre’s Mill Studio. (Performances Thursday 9th October to Saturday 11th October 2014.) It is being presented by the Isosceles Theatre Company and is based on the novel by Mora Grey. Back in that other time, when Krapp was on at the Court, she was a teenage member of the theatre’s wardrobe department. Beckett did indeed come and go through those corridors; in fact he sometimes seemed happier chatting with her and her colleagues than standing in the front line of the production process. Contrary to his image as an unassailable peak of a man, difficult as you would expect from a literary scion of James Joyce, he was warm, sharp, funny. In other words, like his work, which appears to inhabit a landscape of bleakness and nihilism but which is in truth shot through with comedy; hilarity even.

A decade on from that point, Grey became a student and subsequently a psychotherapist. Analysis, she asserts, was also crucial to the evolution of Beckett as a student of the human predicament. When he was twenty seven and in the throes of a breakdown, he sought help from the distinguished psychoanalyst Wilfred Bion. Grey notes that he later brought this experience to bear on his writing.

Her own play is thick with references to personal crises and obsessive disorder. Its very existence, like its contents, raises the Krapp-like question of what is true, what happened and what is a construction of the memory.

Yes, she freely concedes, she worked at the Royal Court at the time of Krapp’s Last Tape. Yes, the designer there – an important presence in Grey’s play – was Jocelyn Herbert, a close and influential friend of Beckett’s; the best he had in England, he said.

But from these premises, bare as a dark stage, everything is up for grabs in Beckett’s Last Act: the fuming, thwarted director, Peter (no, it’s not Hall) wrapped in a cloak of failure and despair, fearing that his Krapp, which should be “grievous and riveting” is a travesty, and all the more embarrassing because of the author’s presence. Then there is the wardrobe mistress, musing on her pregnancy, feeling “delighted, full up, now I have a purpose,” and just about to move in with Doug, who sounds like a bounder, and is.

Partly through death’s bad offices, the figure of Beckett cannot help but have a spectral element, never mind the uncanny accuracy of Dave Marsden’s portrayal. It is rather as if the playwright has now graduated to the level of theatre ghost and has come back to haunt his own legacy. What unfolds in the ninety minutes of the play is a series of monologues so full of references to the other characters in the story that they amount to a virtual, or remotely conducted conversation.

In this peculiar forum we see them offer involuntary clues to their present passes and, more pertinent still, their pasts. For this play is about nothing if its not about memory. That faculty itself, in all its fallibility, is perhaps the true ghost at the feast.

True, Beckett and his play cannot help but dominate the scene, rather as the institution of Hamlet dominates the rest in Stoppard’s Rosenkrantz and Guildenstern Are Dead, but memory itself is more manipulative still; everyone here depends on it in order to map-read their way through thick fog to the outlines of the present. “It (memory), ”says Grey, “is not laid down and stays there; it is being constantly re-worked through our continuing experience of life.”

Jessie, in wardrobe, makes Sam think of his mother, whom he now calls back to mind; will George, the actor trying to play Krapp, fear that he (Sam) wants to dominate him as his mother dominated him? In fact, does George think that Sam’s real wish is to somehow take over from him, and hence efface him?

Peter the director has his own Mum thing going on; all those obligations to her, the stabs of pain that happen when her image appears to him. As for Anna, the actress in Not I, a fifteen-minute piece to be peformed “at the speed of thought” by a disembodied mouth, she is on the brink of a nervous breakdown. To borrow another Beckett title, happy days; but rich ones too. There’s progress afoot, even if it only consists of trying to do as Krapp is doing, and cohabit with your memory. That play, having seemed so central to the story, emerges as a catalyst for this other enterprise and moves gradually into the wings of consciousness. Until, at the end, it (Krapp’s Last Tape) appears to be playing its author, in ways I shan’t give away here.

No such traumas for Jim Dunk, directing Beckett’s Last Act, and his excellent cast, two of whom, Marsden and Pat Abernathy, have been developing the Isosceles repertoire for more than thirty years. In this play as much as in any of the others, they are in a sense on home ground, being graduates of Trinity College Dublin, as was Beckett. What would he have made of all this? My view is he would have been gripped. He would have laughed too.

Harold Shipman, known to his many patients, family and friends as ‘Fred’, was Britain’s worst serial killer. The official inquiry into his crimes … END_OF_DOCUMENT_TOKEN_TO_BE_REPLACED

Being one of Arthur Miller’s best-made and most challenging plays, The Crucible is also one of his most frequently performed. I was going to say … END_OF_DOCUMENT_TOKEN_TO_BE_REPLACED

To be fair, Linda Lavin called her concert Love Notes, there’s an album of the same name, and that’s more or less what it was about - variations on … END_OF_DOCUMENT_TOKEN_TO_BE_REPLACED

Noughts & Crosses is a euphemism for blacks and whites. The Noughts are the whites and the Crosses are the blacks. In the world of the play, the … END_OF_DOCUMENT_TOKEN_TO_BE_REPLACED

This ‘juke box’ musical offers highly polished, undemanding, feel-good entertainment, showcasing, as it does, 30 songs dating from the 1960s to the … END_OF_DOCUMENT_TOKEN_TO_BE_REPLACED