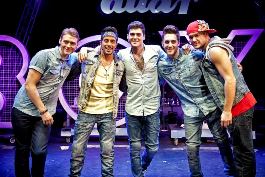 Having played Off- Broadway for just over 5 years and more than 2000 performances, Altar Boyz made its UK premiere for a strictly limited run of 14 performances at the Greenwich Theatre.

With flashes of bright lights and pyrotechnics it is made to feel more of a pop concert than a musical. Before the show opens, a few loud announcements came into the auditorium X-Factor style, quickly followed by an awkward silence from the audience, however once the show opened all was forgotten.

Using a soul-cleanser, the band’s mission is to clean the souls of the audience before the end of the show, but four souls remain unclean.

After a twist in the story, four of the boys reveal they have signed solo deals and have not been honest with each other. One of the boys turned down his deal to stay with the band and very quickly finds himself as the last remaining member, but all ends well in this uplifting piece.

This musical comedy sure hits the right spot, cleverly changed scripting allowed for British humour, something that is all too often forgotten these days. A special mention to Jonny Fines, whose comic timing really stole the show and kept us fully entertained in this ninety minute one act Musical. Although Doyle plays the lead character all boys get there moment to shine in this show, but Doyle delivered an excellent vocal.

Before seeing Altar Boyz it did cross my mind that this might be another Book of Mormon, but I must say how wrong I was.

Altar Boyz is full of cheesy pop songs, including a song about Jesus calling the boys on their cell phone, and together with fun camp choreography this show is a sure pleaser with the crowd. With a minimalistic set this show really is all about the five guys.

Strong vocals and fabulous dancing, together with a great comic script, made this show a heavenly treat and one not to be missed.

ALTAR BOYZ is directed by Steven Dexter, whose credits include Loserville in the West End and the World Premiere of Stiles and Drewe’s Honk! at the Watermill Theatre, and produced by Paul Taylor-Mills Ltd, producer of In The Heights at Southwark Playhouse and Rent and Bare here at Greenwich Theatre.

Harold Shipman, known to his many patients, family and friends as ‘Fred’, was Britain’s worst serial killer. The official inquiry into his crimes … END_OF_DOCUMENT_TOKEN_TO_BE_REPLACED

Being one of Arthur Miller’s best-made and most challenging plays, The Crucible is also one of his most frequently performed. I was going to say … END_OF_DOCUMENT_TOKEN_TO_BE_REPLACED

To be fair, Linda Lavin called her concert Love Notes, there’s an album of the same name, and that’s more or less what it was about - variations on … END_OF_DOCUMENT_TOKEN_TO_BE_REPLACED

Noughts & Crosses is a euphemism for blacks and whites. The Noughts are the whites and the Crosses are the blacks. In the world of the play, the … END_OF_DOCUMENT_TOKEN_TO_BE_REPLACED

This ‘juke box’ musical offers highly polished, undemanding, feel-good entertainment, showcasing, as it does, 30 songs dating from the 1960s to the … END_OF_DOCUMENT_TOKEN_TO_BE_REPLACED