It’s one of the strangest nights out at the theatre. You’re met at a railway station in the far east of London by a group of ushers who load you into a plush coach and spirit you out into the rear end of beyond. If you’ve never come this way before, you’re in good company, for you now enter Thamesmead Waterfront, one of the capital’s last redoubts of true wilderness. 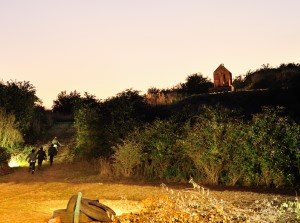 A chain of roundabouts takes you up towards the crook of the Thames and the peninsular land to the east of Woolwich Arsenal. This is military country and has been so for millennia, reclaimed from the river’s marshy edge and pressed into service for the realm’s defence. Belmarsh prison is close by. Henry VIII came regularly to inspect the construction of his fleet; eighteenth-century convict hulks housed the labour for a military canal.

The last two great wars saw it emerge as a mighty, secreted area of munitions production. Workers were not allowed to tell their families the exact location of their shifts. TNT caused handlers’ skin to turn yellow and earned them the nickname of Canaries.

Today the remnants of this once toxic hinterland resemble a rough green rug thrown over rubble. Soon much of it will be gone to provide essential new housing. There is drama in this change and transience, the more so when the
place finds a new career, however brief, as the backdrop for a production of Blue Remembered Hills. The title is itself memorable as a quote from the poet A.E. Houseman’s 1896 collection, A Shropshire Lad, and was used by the author Dennis Potter for his 1979 TV drama about children at play in the wartime countryside of 1943.

This was, at the risk of cliché, a milestone, in which an impressive cast (Helen Mirren, Colin Welland, John Bird, Michael Elphick) met Potter’s challenging expectations of having the children portrayed by adults. To see the Antwerp-based De Roovers company now turn this same trick in the flesh is to be reminded of Potter’s rationale, which was essentially that children are small adults and adults are big children.

This production clasps that vision and runs with it for ninety moving and often breathless minutes. Running is the key as the seven-strong cast roam and flap up and down the little wooded hill, more landscape than stage set, and perfectly capture the aimless energy and terrifying phantoms of childhood. A childhood in which grown-ups are too taken up with the business of survival to supervise their children’s play. It hardly matters. The kids make their own entertainment, and with it their own confrontations. One of these involves an argument over an apple, but develops with shocking speed into a show of bullying. There follows a rivalrous swapping of strategies of how best to capture and kill a squirrel, and other fallings-out or failures of self-government reminiscent of William Golding’s 1954 novel The Lord of the Flies. Crucially, these exchanges are made crisp and audible at range by a good system of mic and amp.

If Potter’s own vision of childhood was made more anarchic by the supposedly adult war in progress while he was growing up, this comes through powerfully in De Roovers’s treatment. Nowhere is this more vivid than when the children, Peter, Donald, Angela and the rest, grow numb with terror at the thought that a German prisoner of war might have escaped in their vicinity.

Potter would surely have welcomed the peculiar surrealism here: a tract of wild urban land, condemned as childhood itself; neighbourhoods bussed in for the spectacle; the drinks queues and upturned spirits bottles at the glorified bar trolley; the auditorium a little gone-tomorrow stadium; the Belgian intonation of his children’s lines; the walking-out of a couple, only one, tutting and bemused; above all the extraordinary denoument of the blazing shed in which one of the boys is trapped. He would also have applauded the location, as liminal in its own way as was the Forest of Dean to him.

Since De Roovers is a directorless company, credit must go to all seven cast members, with Robby Cleiren particularly poignant as the luckless Donald, and Lieven Slabbinck for the show-stopping pyrotechnics, just as the natural daylight dies.

Under the shadow of war, seven children are playing in the countryside. As their games escalate, the boundaries between fun and cruelty become ever more blurred, leading to disastrous consequences.

This outdoor, site-specific production takes audiences on a journey to a hidden landscape, officially closed to the public for more than a century.

Last seen at GDIF in 2017 with their production of A View from the Bridge, De Roovers is one of Flanders most respected theatre companies, returning with a production which will take audiences to a restricted landfill site, which holds memories of munitions factories and, with their demolition and the establishment of Thamesmead in the 1960s, childhood games.

Blue Remembered Hills is presented as part of the Greenwich+Docklands International Festival 2021.

This entertaining new musical is very fortunate in having as its leading lady the terrific Katie Elin-Salt: she is onstage almost throughout, singing … END_OF_DOCUMENT_TOKEN_TO_BE_REPLACED

“Keep it shallow, keep it pretty, keep it moving,” declares Justin Vivian Bond, letting the audience determine for themselves what precisely is really … END_OF_DOCUMENT_TOKEN_TO_BE_REPLACED

This play didn’t do that well on Broadway the first time around in 1963, and did worse the second time around, even with a revised script, running in … END_OF_DOCUMENT_TOKEN_TO_BE_REPLACED

One of the very few good things about the COVID pandemic is that the opportunities to live stream theatre performances have increased exponentially, … END_OF_DOCUMENT_TOKEN_TO_BE_REPLACED