Home » Reviews » Can You Hear Me Running? at The Pleasance – Review 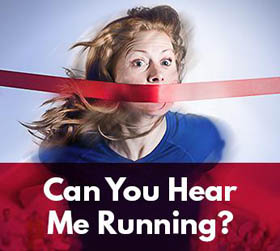 If you are looking for passion, truth, integrity and a few good laughs along the way then it’s well worth the trip to Islington to catch Louise Breckon-Richards’s play Can You Hear Me Running? at the Pleasance.

Based on Beckon-Richards’s own story, she and writer Jo Harper have come up with a probing real-life drama that challenges our sensibilities but leaves us feeling warm inside. Actor and singer Louise (Loo) has an unrealised problem with her larynx and loses her voice. In recreating that moment, and the torturous journey she then embarks upon, we meet a whole host of vocal experts, lovingly mimicked by Loo as she searches for answers – physical, medical, psychological, psychosomatic – to the fundamental metaphorical human question: what happens when a singer can’t sing anymore? It hits her like the loss of a loved one and her bereavement process becomes a parable for those who suffer similar physical afflictions or loss: Loo’s story is a frank and instructive exploration of how she dealt with it and, as wife, mother, sibling, daughter and grand-daughter, how she survived losing such an integral part of her identity.

She survived by running. Not running away but running to get there. Running became a release, a trigger to help her ward off depression, to deal with the voiceless chores of everyday life, to combat having to communicate by writing with her kids and suffer the ignominy of being branded “No Name” on her Starbucks coffee cup. In her new world of husky whispers, running energises her, becomes her companion and, above all, engenders optimism. And, eventually, on a “tidal wave of hope”, running the London Marathon becomes her salvation.

Although Beckon-Richards is the sole performer in the show it is a “not-quite-one-person” play. As a singer, music plays a big role in her life and her running persona, these days, would not be complete without iPod and playlists. All the music in the show is live and integral to both set and action, provided effectively, in accomplished fashion, by Dan Glover on keyboard. Glover provides dramatic tension, atmosphere and complements the myriad moods that Loo displays – never more touching than the moment that Loo declares that she has no need for music anymore and Glover gets up, calmly picks up his sheet music and leaves the stage. In that simple but extraordinary moment of poignant silence, we come to feel Loo’s enormous sense of loss.

A small technical point: Loo often speaks over the music which sometimes makes it difficult to hear her words clearly. Perhaps the volume control on the keyboard needs to be adjusted at some points in the show, something for director Steve Grihault to ponder, perhaps, but it’s only a small blip in an otherwise superbly directed show. Grihault handles the quite demanding technical aspects of the piece brilliantly. We are confronted by Eva Auster’s white, three-dimensional, cuboid set which turns out to be a stage-wide castellated projection screen on which scenes are set, Brechtian-esque tag lines are displayed, throaty-depths are examined and writing can be seen as it happens. This last is conveyed through the ingenious use of a Go-pro camera around Loo’s neck that shows what she is actually writing on a pad in real-time. Far from being gimmicky, these technical accoutrements help Loo to deliver what are involved details of her medical condition in an amusing and accessible way. Projection always provides extra problems for the Lighting Designer but Tom Turner handles it well with a clever and sympathetic design. And the other aspect of the innovative set is that the various cubes act as repositories for sportswear and other props that Loo uses to illustrate her story.

But for all the hi-tech spec and high-calibre production values, plays are about language. Can You Hear Me Running? is beautifully written by Harper and lovingly performed by Breckon Richards. She keeps it real throughout, she has an extraordinary capacity to draw the audience in and gets us to share the downs and the ups, the flat and the bumpy and, of course, the music and the silence of her highly personal experience. And having had to put her body, involuntarily, on the line, Loo bares her soul so that we can all take a little piece of it away with us and either count our blessings or be encouraged to stand up to our privations.

Can You Hear me Running?
Created by Louise Breckon Richards and Jo Harper
Written By Jo Harper
Directed by Steve Grihault
Can You Hear Me Running? charts the real life experiences of Louise Breckon Richards, a performer who loses her voice to a rare condition and decides to overcome it by running the London Marathon. Louise embarks on a journey to re-find her voice and meets a host of characters along the way, from voice professionals to new age healers. In a visually engaging and innovative production, live music, video projection and storytelling are combined to theatricalise this intimate yet universal story about never giving up until the finish line.

Can You Hear Me Running? is funded with generous support from Arts Council England.

Britain, so a London cab driver once told me, is obsessed with the Second World War, as though it happened just recently. Power Luncheon would seem, … END_OF_DOCUMENT_TOKEN_TO_BE_REPLACED

William J Dunleavy, author and star of this monologue play, is a writer and face to watch. He enters the room (as the staging is more geared towards … END_OF_DOCUMENT_TOKEN_TO_BE_REPLACED

Cirque du Soleil’s Luzia is a joyful whirl through a psychedelic Mexico, which reminds us why live theatre is so special. Anyone who goes to … END_OF_DOCUMENT_TOKEN_TO_BE_REPLACED

I am always very excited to come across a new theatre, and Esher Theatre is a real ‘find’, conveniently situated near to Esher High Street and right … END_OF_DOCUMENT_TOKEN_TO_BE_REPLACED

Cecil Sharp is no unsung hero. Without the energy of this driven and at times prickly musician, the traditional folksong of rural England would very … END_OF_DOCUMENT_TOKEN_TO_BE_REPLACED