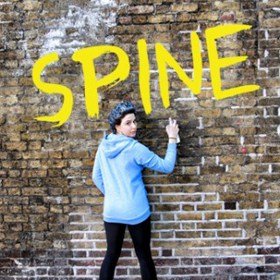 We are often confronted with posters lacquered with words of praise and a litany of multiple stars for new pieces of theatre or film. The promotion relies on it and the demand is ‘more, more, more’; all the time, everywhere. In fact, the omnipresence of these promotional declarations is enough to enervate and make a cynic of both the enthusiastic patron and casual observer alike.

Clara Brennan’s Spine is one such work. One look at the flyer evinces a graffiti of 4 and 5-star commendations. This writer recalls being one such admirer, having seen this production a few years ago and prior to the tour from which it is now in its midst. Coincidentally, fortuity proved that it would be not only be performed in the same theatre space but also starring the very same actor (Rosie Wyatt). Could the weight of history be suspended by its 2016 version?

Wyatt plays both rough n’ ready Amy (a recalcitrant, but amiable, youngster) and Glenda (elderly, but sprightly spirited, pensioner). Amy’s delinquency is fed by her surrounding company; a bunch of ne’er-do-well friends, an iffy boyfriend and a dysfunctional family unit. Having crossed the ethical family line by stealing from others, she leaves home.

After spotting a faded ad in a shop window, it is upon Glenda’s door she knocks, enquiring about the spare room available. Whilst Glenda might be advancing in terms of years, she is fiercely opinionated and full of vim. She may not suffer fools, but nor does she allow cynicism cloud hope in the capacity of the young to shape the world for good.

It is with this optimism that she not only offers young Amy a sanctuary; she also offers her an education. This is sourced from all the books she pilfered when news broke of her local library closing down (one once opened by her beloved Mark Twain in 1900, we are told).

Performances like Rosie Wyatt’s are rare. She operates and owns the stage with such consummate craft that its magnetism is utterly mesmerising. Somehow, she straddles the line between being engaged with the audience and yet also simultaneously so engulfed in the narrative that she fully inhabits whichever character she is summoning.

Spine hoots, hollers and demands widespread acclaim with its sassy charm and flighty script. It is one packed with urgent momentum and the most precious of theatrical fruits: warmth. There is a lot of heart here and the language crackles with fizzing energy. The story has a beautiful balance between emotional heft and fleet-footed humour. It is one to elicit a smile on the face and draw tears from the eyes. Bravo. Outstanding.

Hilarious and heartbreaking, Spine charts the explosive friendship between a ferocious wise-cracking teenager Amy and a mischievous activist pensioner. Glenda is hell-bent on leaving a political legacy for her community, and saving Amy because ‘there’s nothing more terrifying than a teenager with something to say’.

In an era of political disillusionment and generational divides, has politics forgotten the people it represents? And, what price do we put on knowledge? Amy is about to find out.

If the audience were to be exposed to full versions of the seventy-four songs listed in the programme, it would be a very long show indeed. I suppose … END_OF_DOCUMENT_TOKEN_TO_BE_REPLACED

How can a play be both charming and devastating? Through its tight script, abundant humour and pitch-perfect performances, 4th Country manages to … END_OF_DOCUMENT_TOKEN_TO_BE_REPLACED

Britain, so a London cab driver once told me, is obsessed with the Second World War, as though it happened just recently. Power Luncheon would seem, … END_OF_DOCUMENT_TOKEN_TO_BE_REPLACED