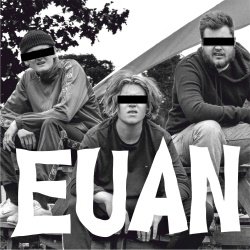 Sometimes a show is enhanced by a character that is missing. Think of ‘Er Indoors from Minder, Mrs Mainwaring from ‘Dad’s Army’ or Mrs Wolowitz in ‘The Big Bang Theory’ All of these were often talked about but never seen. This idea of a missing central character has been taken to a new level by Chewboy Productions in their one-act play Euan at the Tristan Bates Theatre.

In a room sits a small side table with a telephone on it. Three men enter. They all wear black socks, dark coloured shorts, and a white vest with a letter on it – ‘X’ (Georgie Bailey), ‘Y’ (George Craig) and ‘Z’ (Hal Darling). The boys go off and then the phone rings, ‘Z’ returns and answers it. He doesn’t say much but then he goes out again. ‘Y’ comes out, drying himself from the show and starts to talk to the audience, trying to explain that he has lost Euan. This then is the start of a madcap hour when the three try to not only find Euan but also escape the possible wrath of their never seen but much-feared boss.

Euan is an odd show for many reasons. Primarily because we, the audience, are basically dropped into the middle of a story with no idea who anyone is or why they are doing what they are doing. I really liked this as it gave my fertile mind a great chance to write backstories for everyone involved. The story itself, whilst not on the surface that complicated actually seemed to have quite a few layers to it. Each of the three characters had their own individual personality quirks and it was interesting to see how they interacted not only with each other but, especially in the case of ‘Y’ with the audience themselves. At times, the writing – credited to Georgie Bailey with a story credit to all three of the performers – was completely manic with a lot of cross talking and movement that reminded me a bit of a cross between the Marx Brothers and the Three Stooges. It was definitely a lot of fun. One other thing with the writing that I really liked was the ending of the play which had a couple of rather nice twists to it.

The three actors were each very different but worked really well together. My only slight niggle was that there were times when the action and dialogue became too manic and was echoing around the stage so that it became difficult to distinguish the words being spoken. However, despite this, all three came across as very well versed in the acting profession and I have to say George Craig has a wonderful range of facial expressions to augment whatever is happening to his character – and quite a lot does. I was also impressed at the way he flitted between mega-rant mode and quiet potential author dictating story ideas into his recorder at the flick of a switch. Full credit also has to go to the boss who, whilst never seen or heard, managed to cause fabulously extreme physical reactions in her boys.

A quick mention here for the programme which, I have to say, was really impressive for a fringe production and was definitely worthy of a more mainstream theatre in style and overall quality, especially the word search which I am still having fun with.

Overall then, even without the titular character appearing, Euan was a really funny and entertaining one-act play. The roughly one-hour running time flew by and there were many genuine laugh-out-loud moments. The actors and Stage Managers (Beth Dixon and May Curtis) have all put together a very enjoyable show that worked well throughout and I would definitely recommend a visit to see it.

Notwithstanding the comment in the program “nothing is as it seems. Take nothing at face value. This is a play about who know’s what” I enjoyed Euan, and whether he is found or not, he has to be congratulated for being part of a splendid bit of theatre.

Have you seen Euan?
Listen carefully now…and keep up.
We’ve lost Euan. Euan’s gone. Euan ain’t coming back. No one can know that Euan’s gone, cus’, well, we’re ‘sposed to be looking after Euan. And if the boss finds out then she ain’t gonna be happy. So, we gotta find Euan. Which is all well and good, if anyone actually knew what Euan was.
Got it? Good. Let’s get begun.

EUAN delves deep into the nature of what we’d do to save our own skins in the most bizarre situations you think yourself into. A non-stop hour full of the nonsense of your life, paired with outrageous mystery as we embark on our downhill journey to find Euan before anyone else. This fast paced, abstract piece of new writing marks the debut of ChewBoy Productions.

Like most people, I think, I often have mixed feelings about a show I see. Occasionally, though it is rare, there will be a production where … END_OF_DOCUMENT_TOKEN_TO_BE_REPLACED

“The times they are a-changin'”, as Bob Dylan put it - and as a deceased woman’s grandson (Phillip Jones) returns home to attend the funeral, the … END_OF_DOCUMENT_TOKEN_TO_BE_REPLACED

It’s not often that the entertainment tastes of an intellectually snobby middle-aged woman and an action-mad 10-year-old boy align perfectly, but … END_OF_DOCUMENT_TOKEN_TO_BE_REPLACED

Notre Dame is the latest digital production by Threedumb Theatre, live-streamed from The Space in Canary Wharf, London and directed by Stephen Smith, … END_OF_DOCUMENT_TOKEN_TO_BE_REPLACED