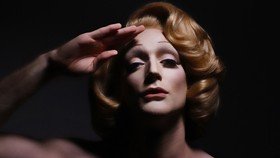 “Falling in love again / Never wanted to / What am I to do? / I can’t help it.” The words of the song with which Marlene Dietrich (Peter Groom) is most closely associated, close out this show. This production is not, I hasten to add, an attempt to tell the story of her entire professional life, which began in 1919 and didn’t fully end until 1984, with the release of a documentary film about herself; in 1975 she sustained an injury when she fell off the stage during a live performance, effectively marking the beginning of the end of a long career, which, rather like the late David Bowie, involved a number of shifts in focus – reinventions, if you will.

Dietrich – Natural Duty does, at it explicitly points out, start at the beginning. Her mother remained (as far as this production goes, anyway) a constant support until her passing. There are questions asked by an unseen journalist – it’s a one-person performance – that evoked the aforementioned documentary, Marlene, in which Dietrich answers certain questions if she wishes to, but largely discusses whatever it is that’s on her mind at that moment.

Groom’s Dietrich came across as a breath of fresh air, unafraid to tell it like it is. I particularly liked the frank and perceptive observations about the acting profession. The lack of sentimentality was, truth be told, quite marvellous, and certainly reflects the sort of character bold and strong enough to have an active involvement in the Second World War – against her native Germany, performing for Allied troops.

A microphone is used for many of the musical numbers that come between biographical details (or do the biographical details come between the musical numbers?), and the production does very well as Groom’s unamplified speaking voice travels at just the right volume across the auditorium, whilst the amplified singing voice is never too loud. There’s a good variety of songs, both in tempo and in style, some of which drive the story along. All of them are situated appropriately at the point at which they are performed.

My schoolboy-level German helped somewhat with understanding whatever was said, or indeed sung, in Dietrich’s first language, though the manner in which the words were delivered meant there was little need for translation. To suffer for one’s art meant something quite different back then. The sort of frontline experiences Dietrich went through do not come close to the ordinary experiences of people living in today’s Western Europe. This is a story that more than deserves to be told, and not just because we who are alive today enjoy the sort of liberty at our disposal because a previous generation fought against the Third Reich.

An example: some of the acting techniques and methods prevalent these days would be complete anathema to Marlene Dietrich. Before a final medley of songs, she talks about turning up to work on time, getting on with the job and then going home having performed to the best of one’s ability. “That’s it!” she almost snaps, pooh-poohing method acting and the apparent need to be psychologically connected to the character an actor is portraying on stage or on screen.

With the briskest of scene changes made possible because there is almost minimal staging, and no changes of costume, the lighting (Chantal Wilson) is well designed, taking the audience from film set to frontline with minimum fuss. Groom has an excellent stage presence, and the rapport with the audience was warm and positive throughout. A poignant and provocative production, this show oozes passion. A triumphant portrayal of a most colourful life.

It is 1942, on the battlefields of North Africa, in a gold sequin gown, Marlene Dietrich takes to the stage to launch her own offensive against the German Reich. For the next three years she would fight the war her way, with an irresistible mix of songs, sequins, sex and sympathy.

An intoxicating mix of theatre, cabaret and drag, this new one-(wo)man show by Peter Groom, created for VAULT Festival 2018, uses music, stories and songs – including Falling in Love Again, Lili Marlene, Where have all the Flowers gone?, Boys in the Backroom, Lola, The Laziest Girl in Town – to reveal a Hollywood icon’s extraordinary commitment to duty.