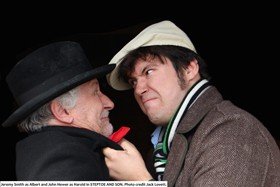 Like me, the audience at the “Museum of Comedy” were mostly of an age to have remembered the original and I’m sure that, also like me, they will have gone away happy and laughing. This is authentic Galton and Simpson – three episodes from the later years of the long BBC television run of the comedy – “Come Dancing”, “Men of Letters” and “Divided we stand”. The scripts have been adapted a bit for the stage but this is kosher Steptoe.

This is a touring production visiting eighteen venues over six months. They have brought a very good set with them. Albert is to the manor born in a wonderful portrayal by veteran actor Jeremy Smith. He looked as if he was enjoying himself as Wilfred Brambell as Albert. John Hewer had the voice and mannerisms of Harry H. Corbett’s Harold but he was a bit more fresh-faced than the original and Albert was more his Grandfather than father – but this is a quibble. The two of them were very good.

Galton and Simpson turned to Steptoe after Tony Hancock moved to ITV in 1962. I had forgotten how much of Hancock there is in Harold Steptoe – he has the same cynicism, pretensions and irritation at the lack of culture he sees around him – in this case in his father. Like Hancock, he wants to better himself and drag himself upwards – away from 23 Railway Cuttings in Hancock’s case and Shepherd’s Bush here. We are on the cusp of pathos and social commentary – though Galton and Simpson would probably have said that they just wanted to make people laugh. The banality of their lives at a time (the 1960s) when everyone else was “Swinging” added to the feeling of missing out. Harold rants at the “Triumph Spitfire” generation and is contemptuous of “The Killing of Sister George” – a breakthrough film in 1968 with a Lesbian theme.

The “Divided we stand” episode, if it had been written by Harold Pinter (which perhaps it could have been), might be seen as a metaphor – Harold builds a physical barrier in the house so that he doesn’t have to interact with his father more than is necessary. It is, at face value, rather cruel as well as surreal. There is an undercurrent of threatening violence at times though you sense that Harold never quite resorts to thumping his Dad. For, despite the battles, they do care about one another.

Some 1960/1970s comedy has stood the test of time – “Dad’s Army” still gets peak time scheduling for example. I’m not sure that Steptoe really has. Yes, there are some eternal truths there – but the characters and their professions as Rag and Bone men do seem frozen in time. It is as funny as it ever was for those of us who remember it – whether it transplants to our modern age I’m not sure. But it’s a rattling good evening in the theatre and I encourage you to see it.

Marking 56 years since the very first broadcast, this production of the classic BBC TV comedy STEPTOE AND SON has embarked on a nationwide tour, opening at the Museum of Comedy on 25th January 2018 and continuing until 22nd April 2018.

The cast will be headed by Jeremy Smith and John Hewer as Albert Steptoe and son Harold respectively. Jeremy
trained at the National Youth Theatre and was also a member of The Young Vic Company and has toured in several productions ranging from farce to Shakespeare. John Hewer works as a writer and director, but is best known for his iconic portrayal of Tommy Cooper in “Just Like That! The Tommy Cooper Show” and for his performance as Tony
Hancock in “Hancock’s Half Hour – The Lost Episodes”.

STEPTOE AND SON ran for 8 series from 1962-1974 and spawned 2 film spin-offs and several guest appearances and is fondly remembered as one of the greatest and most influential programmes. Telling the story of two warring rag-and-bone-men in their Shepherd’s Bush scrap yard home, Albert and Harold became household favourites across generations and still they continue to entertain audiences today. One proclaims he’s a “a poor old man” while the other protests that actually he’s “a dirty old man!” In actual fact, both are telling the truth.

This play was first put on at The Mill at Sonning in early 2010 - the world has, of course, changed significantly since then, and the script has been … END_OF_DOCUMENT_TOKEN_TO_BE_REPLACED

It’s easy to see why the Orange Tree has brought this one back for another run, less than a year after its first outing here. This is a bold, … END_OF_DOCUMENT_TOKEN_TO_BE_REPLACED

I always loved Choose Your Own Adventure books. Definitely not the Steve Jackson ones where you had to roll dice (who did that?) to find out whether … END_OF_DOCUMENT_TOKEN_TO_BE_REPLACED

Well, there’s a bit about Pablo Picasso’s (1881-1973) paintings in this show that bears his name. But it’s mostly about his approach towards women. … END_OF_DOCUMENT_TOKEN_TO_BE_REPLACED