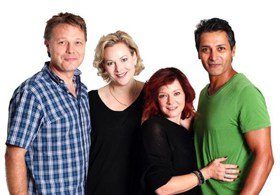 Donald Margulies is an extraordinary writer with a subtlety and humour that gives his plays a depth that’s hugely satisfying. From Sight Unseen, Collected Stories and Brooklyn Boy to the more recent Time Stands Still his signature seems to be to focus on the nuances of human behaviour rather than soap opera dramatics and sudden plot twists. Not that he doesn’t know how to withhold information, or where to let a character accidentally slip out some tasty little secret. His dialogue is fantastically naturalistic; really capturing how couples half listen or don’t listen and talk over each other. Dinner with Friends is a stand out play and so quite deservedly won Margulies the Pulitzer Prize for Drama in 2000.

Tom Attenborough’s production brings out the fears and resentments beneath the surface of two couples. They’re supposedly best friends, supposedly committed to each other, but perhaps lazily assuming that the hard work is over and now they can sit back and relax. But did they ever really know each other? When Beth lets slip to Gabe and Karen over dinner (of course) that Tom is leaving her for a younger woman all their years of friendship start tumbling down. Finty Williams plays Beth with a very watchable balance of hippie idealism edged with a needy defensiveness. Her Beth is the sort of woman who sees herself as arty and open but as Tom has discovered can be hyper critical and hard to love. Hari Dhillon’s Tom is just as complex, part little boy lost, part deluded mid-life crisis, we completely understand why he’s made the choices he has without really forgiving him.

There are some gasps from the audience at his ‘Chutzpah,’ and Dhillon perfectly captures the evangelical and slightly smug way that a middle aged man in love/lust acts like he invented it, like he’s escaped some terrible fate into a wonderland that others can only dare to dream of.

Both Shaun Dooley as Gabe and Sara Stewart as Karen are delightfully convincing as the seemingly perfect couple who are maybe a little too engrossed in their own lives and passions to truly notice their friends. Sometimes we laugh at them, sometimes with them. In Attenborough’s world it’s hard to know whether we’re supposed to like them. But then maybe it doesn’t matter, or maybe that’s for the audience to decide. For some they might seem too self-satisfied and difficult to like – but for me Dooley and Stewart gave them enough layers and subtlety that my heart clenched a little when Dooley talks of how he ‘clings’ to her, and I truly felt for Karen when she asks how they can stay close amidst all the noise of life. In a world of cynicism and machismo it’s a refreshing kick to see a man declare his love for his wife and his choices, however ‘wretched’ they might sometimes be.

David Woodhead’s set looks beautiful and is used to good advantage, there’s a great sunset scene and simple touches that create effective changes from scene to scene. It can feel a little squashed at times, the bed is small and the sofa barely big enough for two – but maybe that all adds to the idea of couples trying to squeeze themselves into something that isn’t a fit.

This is a beautiful subtle play that some people might find too gentle, but I found movingly, brutally human.

Dinner With Friends is a tantalizing and witty portrayal of relationships that explores our dependency on our friends as well as our loved ones. Follow Beth, Tom, Karen and Gabe, whose lives, once inextricably linked, start to come undone.

A roaring success with audiences, this funny yet bittersweet play was awarded one of the most prestigious distinctions in theatre, The Pulitzer Prize for Drama (2000).

This critically acclaimed play has been enjoyed by audiences in Berlin, Vienna, Tokyo, Tel Aviv, Stockholm and New York, where it played for over 600 performances. There are only 35 performances to catch at Park Theatre. Don’t miss your chance to see it.

Dinner With Friends was commissioned by Actors Theatre of Louisville and had its world premiere at the Humana Festival of New American Plays in March 1998. The play received its UK premiere in a production at The Hampstead Theatre, London in July 2001.

Everyman is one of the earliest printed plays, originally written in Middle English and first performed around 1510. It is a morality play, popular … END_OF_DOCUMENT_TOKEN_TO_BE_REPLACED

After being closed for over two years due to covid, the Arcola Theatre has re-opened with Barney Norris’s love song to the people who raised him, We … END_OF_DOCUMENT_TOKEN_TO_BE_REPLACED

Now in its 15th year, La Clique have firmly established their place on the world burlesque circuit and this year’s London cast bring their infamous … END_OF_DOCUMENT_TOKEN_TO_BE_REPLACED

Warm, funny and lacerating, Satinder Kaur Chohan’s new play opens with a fly-on-the-wall look at the daily attempts women make to be accepted and … END_OF_DOCUMENT_TOKEN_TO_BE_REPLACED