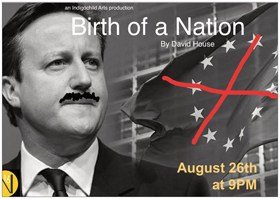 I dispense with a star rating on this occasion, as has become my custom whenever a show unashamedly declares itself to be a ‘work in progress’ and therefore not the finished product. This was a one-off performance from Indigochild Arts, should Birth of a Nation be performed again the company will have taken on board the suggestions and feedback from this audience to make further improvements to the play.

In some ways the recent referendum on whether the United Kingdom should remain in or leave the European Union is an easy subject matter to write a show about, and it slightly surprised me that it was so short, although to be fair, this particular incarnation was itself more than three times the length of the original script. It could become twice as long again by providing its audience with a plausible insight into what was going on in the Labour Party in the run up to the referendum, from a Labour Party perspective. What we have currently is Joe (Madhav Vasantha), a Conservative MP, plus Tony (David House), a backbencher, and Kelly (Kate O’Rourke), listed as a ‘top Tory backbencher’ but is probably better described as a Conservative whip. The Opposition does not therefore get sufficient coverage, irrespective of whether it is positive, and if one really did suspend any and all disbelief at the theatre door, and assume that the events of the play are not necessarily indicative of the outside world, one might deduce from this play alone that Labour wasn’t even having a leadership election of their own at the time of writing.

As I am already getting too political, I turn now to answer several questions asked of the audience by the company to assist them with the further development of the play. Firstly, my overall assessment of the script. It is, in parts, comparable to the satirical wit of Armando Iannucci’s television series The Thick of It, and overall, it is very balanced, especially for a show that, as I have said, only features dialogue between Tory politicians and not those of any other party.

Within Joe’s own family, his lawyer wife Martha (Lois Temel) voted the opposite way to him; their stepdaughter Manda (Hannah Tarrington) does not explicitly declare which side she is on, or even if she actually voted in the referendum, though she raises concerns about the future freedom of movement to live and work in the EU. Completing the cast is Edi (Ida Di Terlizzi), Manda’s girlfriend, who expresses a wish to return to Italy. Manda wishes to join her, presumably to maintain their relationship. Martha later reveals she is leaving the country, too, having secured employment overseas. These multiple and complex issues that arise from all this are handled with thought and subtlety. I think only once during the performance did my mind wander away from the action of the play, and it is with a mixture of regret and relief that I do not recall at what precise point that was.

Secondly, my overall assessment of the performance. The cast do need to slow down a little, and feel free to pause for effect, especially as there is a significant amount of humour in the play. At this performance, a few lines were so rushed they lost their potential impact somewhat. The staging was good, and the scene changes sufficiently swift. The depiction of both Joe’s family and political lives was well-judged, and a unique event seems to have occurred within contemporary theatre where Manda’s ‘coming out’ to her father was as straightforward as any other conversation with him. The use of satirical humour prevents audience emotions from boiling over into anger or frustration. The ending seemed sudden and unexpected, however, leaving me thinking, “Okay, then what?” Perhaps this was the intended reaction. One more thing: I have no concerns regarding lighting cues or sound effects.

Thirdly, the scenes or aspects of the play I found most interesting or entertaining. Of most interest was the working relationship between Tony, Kelly and Joe, the latter being a politician of conscience, yet being agreeable to towing the (apparent) Tory party line. Kelly is so sure and certain in her opinions that it is difficult not to be persuaded by her (her acerbic putdowns are the most entertaining aspect of the play), though Joe continues to wrestle with issues of importance to him, and it remained to be seen as to whether he would yet be corrupted by the Whitehall machine.

Fourthly, I make the following suggestions with regards to how the play could be made better and more enjoyable. The audience knows nothing, as the play stands, of the personal lives of Tony and Kelly. This does not necessarily mean invoking the same level of detail as with Joe’s family. I would have thought, for instance, a simple, ‘How was your weekend?’ style question, answered briefly, reflecting a typical conversation between colleagues at the start of a working week, would be sufficient. As it stands, they do not appear to even have lives outside Westminster; if this is the case, let us see them busy at work at unsociable hours. Further, it would also be beneficial to see a portrayal of a House of Commons debate in which Joe participates in. How would his fellow Conservatives, let alone the Opposition parties, respond to his assertions?

Fifthly, the character I was most able to root for and identify with. I cannot identify with any of the characters, having never been elected to Parliament or being a direct relative of someone who has. I have not held any of the professions of the characters. I am, after some reflection, ‘most able to root for’ Martha. She pursues a successful career, treats her daughter as the young woman that she is (and not a child to be mollycoddled) and, though somewhat abrasive, is a no-nonsense character with a rather likeable assertiveness.

This play takes an appropriately objective view of different views on the referendum and the potential consequences of the result. I understand an initial plan to possibly take the show (with modifications) to the Edinburgh Fringe for its 2017 season has been put on the backburner as the show’s topic is very much relevant to ‘now’ (that is, 2016): I suggest the plan for Edinburgh in 2017 should proceed, or at least investigated further. Debates and discussions relating to ‘Brexit’ are not going away anytime soon – it has been widely reported that it will take at least two years from the point at which a formal declaration to leave the EU has been made (the so-called ‘triggering’ of ‘Article 50’) before the UK actually leaves. I wish this play well for the future.

We’re out of the EU! The Labour party is crumbling from within! The NHS moves steadily closer to privatisation and the Tory government has a completely fairly elected new PM! Life is great. Isn’t it?

Birth of a Nation is a work in progress play that takes a satirical look at the failings of a Tory government riddled with NHS pains, Boris Johnson and Brexit.

Joe is a fresh faced, hot shot Conservative MP. Internationally aware and sympathetic to the working classes but a realist in a time of social and political upheaval. As Britain finds itself in uncertain turmoil and the members of the Labour party bicker amongst themselves, the Conservatives aim to look strong and they aim to make Joe an international superstar of right wing politics, the face on the frontline of a new Conservative party. But are Joe’s left-wing leanings at odds with what the party wants from him?

Birth of a Nation comes from writer and actor David House, who previously co-wrote and stared in the Edinburgh Fringe hit show Jeremy Kyle Does Shakespeare. Birth of Nation began as a 15-minute play that previewed at the Actor Awareness Health Night at Theatre N16 in May. Following audience acclaim, David has extended the play to one act, exploring the life of protagonist Joe as the Tories scramble to deal with the fallout of Brexit.

This happens to be a timely production: employment has hit the headlines again at the time of writing, this time because of the concept of ‘quiet … END_OF_DOCUMENT_TOKEN_TO_BE_REPLACED

An opera (well, technically, an ‘opéra comique’, as there is spoken dialogue) in a relatively small space like the Charing Cross Theatre calls for … END_OF_DOCUMENT_TOKEN_TO_BE_REPLACED

Shoes, one would have thought, are fairly recession-proof. The problem for Charlie Price (Joel Harper-Jackson, reprising the role he previously played … END_OF_DOCUMENT_TOKEN_TO_BE_REPLACED

The descriptions of what happens in this show are so vivid that paradoxically they leave nothing to the imagination – and, at least at the performance … END_OF_DOCUMENT_TOKEN_TO_BE_REPLACED