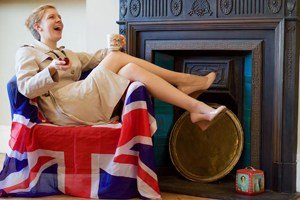 Ellen Chivers‘ new one-woman show is warm, witty, satirical, and above all else, hugely entertaining.

Firmly set in the present day, Ellen plays a version of herself: Ellen Chivers, Royal Hunter, a woman with a keen interest in Harry Potter, dogs and yes, you guessed it, the Royal Family. The opening 20 minutes see Ellen transform herself from Queen of England to Queen of Tinder, the popular dating app. Minor costume changes and major changes of physicality and voice allow her to seamlessly dip in and out of different characters, many of whom are loveable caricatures and clever takes on well-known famous faces; and this is where the strength of the piece lies.

Ellen’s characterisation is clean, precise, and well thought-out. Under the exemplary direction of Steve McCourt, she has managed to find subtle nuances and outrageous eccentricities and she plays these to the max. Confidently breaking down the fourth wall, the audience is encouraged to laugh, cry, and even shout out names of National Treasures who they may feel an affinity towards.

The hour-long show whizzes along at a tremendous rate. Whether Ellen is seeking out advice from her best friend, Siri (yes, the Siri in all of our pockets) or heading out to Pizza Express with a household name for one of those Leggera Pizzas (yes, the ones with the middle cut-out and replaced with salad), Royal Hunter leaves you with aching cheeks and fast-growing laughter lines. We find ourselves willing along our heroine, empathising with her foibles and her quirks whilst tearing our own hair out as she lands herself in an increasing number of Basil Fawltyesque moments of awkward embarrassment and heavy-handed hole digging.

If you see one show this year, make it this one: you’re guaranteed to leave laughing. But whatever you do, don’t mention The Great Fire of Windsor in 1992.

Experienced actress Ellen Chivers embarks on her first venture as a writer in her new comedic one-woman show, based on her lifelong obsession with The Royal Family. Royal Hunter receives its premiere as part of the 2016 Camden Fringe, playing at the Camden People’s Theatre from Sunday 21 – Friday 26 August 2016.

Royal Hunter is a fictional account of the day that Ellen Chivers achieved her life-long ambition and met Prince Harry through the social dating site, Tinder. After Harry ‘swipes to the right’ on her picture, we follow the progress of their budding relationship.

But when it’s time to meet the family, Ellen struggles with the unfamiliar Royal environment; getting trampled by corgis, sitting in Prince Philip’s chair and mentioning the unmentionable: The Great Fire of Windsor in 1992.

Using bizarre, hypothetical situations and modern social references, Monarchists and Republicans alike will revel in the silliness of this rather unlikely tale, following Ellen’s long and arduous journey to secure the love of her perfect match.

Like most people, I think, I often have mixed feelings about a show I see. Occasionally, though it is rare, there will be a production where … END_OF_DOCUMENT_TOKEN_TO_BE_REPLACED

“The times they are a-changin'”, as Bob Dylan put it - and as a deceased woman’s grandson (Phillip Jones) returns home to attend the funeral, the … END_OF_DOCUMENT_TOKEN_TO_BE_REPLACED

It’s not often that the entertainment tastes of an intellectually snobby middle-aged woman and an action-mad 10-year-old boy align perfectly, but … END_OF_DOCUMENT_TOKEN_TO_BE_REPLACED

Notre Dame is the latest digital production by Threedumb Theatre, live-streamed from The Space in Canary Wharf, London and directed by Stephen Smith, … END_OF_DOCUMENT_TOKEN_TO_BE_REPLACED