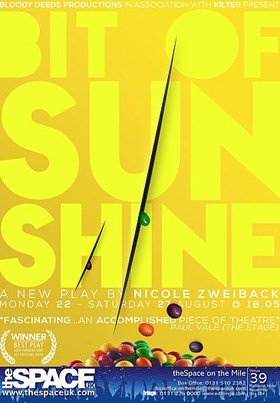 Nicole Zweiback pulls you in the moment she speaks as Kira, the studious teenager who gets off on throwing up after finishing a big meal. It is estimated that 750,000 people suffer from an eating disorder in the UK, and bulimia is top of the list in Bloody Deeds and Kilter’s production, Bit of Sunshine.

Currently showing at The Space on the Mile at this year’s Edinburgh Fringe Festival, in a small and intimate stage, you can watch Kira on her nightmare journey into rehabilitation. But, audiences should be warned this one-woman show has no sense of hope or resolution. It’s a full-bodied, intense and penetrating performance about serious matters – bulimia, depression and mental illness, and there’s no turning back.

Directed by Katie Coull and Ed Theakston, the show moves from Kira’s experience with bulimia growing up as a young girl and her immediate entry into group therapy with other sufferers. Some lines of the script are informative of the mindset of someone with bulimia such as the highs of feeling weightless and skinny, and the need to eat, just, in order to throw it all up again.

Kira’s suffering is enhanced with the use of stacked chairs which Zweiback throws and jumps onto in quick succession, suggesting the panic and Kira’s own state of mind being compromised. She often equates the experience as comparable to Jews in concentration camps.

No doubt, things are bleak for Kira, yet Zweiback’s energy is limitless. Her performance is full of talent, which sees her sweat, scream, spin and shout to the top of the room. Bit of Sunshine itself is insightful, but one cannot wish to be saved and pulled out of it.

“My disease, it’s like a drug. You feel it deep down, and once you’re hooked it never leaves you. But I want everything I touch… to turn to gold.”

Direct from winning Best Play at the LOST Theatre One Act Festival, Kilter are excited to be teaming up with Bloody Deeds for this production of Nicole Zweiback’s new one-woman play, “Bit of Sunshine”, which will have six performances only at this year’s Edinburgh Fringe, from the 22nd to the 27th August.

Kira is the perfect teenager. Kira wants to go to Oxford. But her eating disorder shatters everything in her path. In this poignant, raw and honest new play a young girl explores what it’s like growing up with mental illness and the lifelong struggle of addiction. A dark comedy about coming of age in a world obsessed with the struggle for perfection.

If the audience were to be exposed to full versions of the seventy-four songs listed in the programme, it would be a very long show indeed. I suppose … END_OF_DOCUMENT_TOKEN_TO_BE_REPLACED

How can a play be both charming and devastating? Through its tight script, abundant humour and pitch-perfect performances, 4th Country manages to … END_OF_DOCUMENT_TOKEN_TO_BE_REPLACED

Britain, so a London cab driver once told me, is obsessed with the Second World War, as though it happened just recently. Power Luncheon would seem, … END_OF_DOCUMENT_TOKEN_TO_BE_REPLACED