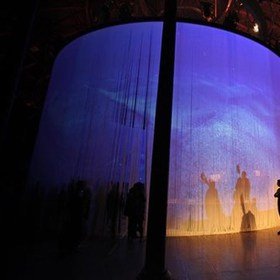 Picture this – you’re standing encircled by a 360 degree light curtain: 5,600 silicon rods dangling from a huge metal ring suspended from the ceiling. The rods hang together to display images and video. It’s otherworldly – like you’re in a planetarium staring up at the stars, but with an added bonus of a live choir and orchestra enveloping you with sound. This was the setting for the London Contemporary Orchestra and Choir, who delivered the final live immersive gig for Ron Arad’s Curtain Call installation at the Roundhouse in Camden last night.

Over five pieces, the choir and orchestra’s music changed from serene to disjointed, unnerving to wondrous. And the story the musicians told was played out in the visuals on the light curtain – some of them startling, some ethereal, some beautiful, others jarring.

The compositions chosen by the London Contemporary Orchestra were varied and interesting, and catered to different tastes. The first, John Tavener’s Svyati – meaning ‘Holy’, was a moving spiritual melody with a solo cello in dialogue with the choir singing in prayer — this was accompanied by visuals by Nicol Vizioli depicting innocence, purity, and a Jesus-like figure slowly exploring his surroundings.

The second piece – the world premiere of CHAINES’ (aka composer Caroline Haines) Down, began with an arresting electric guitar theme, before building in tone and speed. Pavel Samokhvalov’s visuals echoed the electronica style of the music, becoming faster ..if slightly nausea inducing..at the end of the piece.

Next, Morton Feldman’s Rothko Chapel, returned to the ethereal. Feldman wrote this piece in tribute to his artist friend Mark Rothko, and his 14 paintings which line the walls of the contemporary Rothko Chapel in Texas – a place known for its meditative qualities. The music is deconstructed to single sounds, which are allowed to linger and breathe, filling the space around them – much like the colours in Rothko’s paintings, which seep into the corners of their canvas. The London Contemporary Orchestra’s musicians delivered this beautifully – sitting outside the circle of light I was almost hypnotised by the music and the accompanying visuals by UniversalAssemblyUnit – which to me resembled (to me) a journey through space and the stars.

Next – back to earth with a bang for the world premiere of Mica Levi’s You Belong to Me – a piece of music which began in a light, happy tone but moved to an anguished, repeating jarring tone – the change in mood depicted startlingly well by the LCO’s musicians.

Finally, the bizarre yet entertaining piece by Yoko Ono – Sky Piece to Jesus Christ. I imagine this is what the world might look like to someone who’d eaten a punnet of questionable mushrooms… It finished with the LCO members (who must be commended for maintaining straight faces) being bandaged by stage hands, to the point that they could no longer play.

The variation of the music, and the clear talent of the musicians, made this an extremely interesting watch. But for me, the most arresting part of the performance was actually its staging and wider concept: the audience can choose how they interact with the art unfolding before them. With the inner and outer circles of Ron Arad’s curtain call installation, the audience is able to enjoy and appreciate the works of music and art in their own way.

The audience are encouraged to walk around the installation – from being part of the inner circle – where people stand in silence and watch the musicians and visuals around them, to parting the rods and stepping outside the circle – where you can still hear the music and see the visuals, but you’re a little more distanced from the central action.

The outer circle is more relaxed, with people walking around, taking photographs, sat on the floor with a beer chatting quietly to friends. In the way of many immersive theatre experiences, the installation encourages curiosity, and adds another dimension to the way we see art.

While the live elements have now finished, Ron Arad’s Curtain Call is available to view until Monday 29th August, so if you’re in the area this bank holiday weekend it’s worth a punt. And if the weather is kind there’s also the Camden beach – a slice of the Med on the Roundhouse balcony.

London Contemporary Orchestra returns to the Roundhouse as part of a series of immersive gigs in and around Ron Arad’s 360° installation, Curtain Call. The evening will feature world premieres of two new commissions by composers Mica Levi and CHAINES.

Bespoke visuals come from Nicol Vizioli, UniversalAssemblyUnit, Ioana Sisea, Pavel Samokhvalov and Hannah Perry.
Winner of the Ensemble category at the Royal Philharmonic Society Music Awards 2015, the LCO has established itself as one of the UK’s most innovative and respected ensembles – promoting the best new music and cross-arts collaborations to an increasingly wide audience.
http://www.roundhouse.org.uk/

Everyman is one of the earliest printed plays, originally written in Middle English and first performed around 1510. It is a morality play, popular … END_OF_DOCUMENT_TOKEN_TO_BE_REPLACED

After being closed for over two years due to covid, the Arcola Theatre has re-opened with Barney Norris’s love song to the people who raised him, We … END_OF_DOCUMENT_TOKEN_TO_BE_REPLACED

Now in its 15th year, La Clique have firmly established their place on the world burlesque circuit and this year’s London cast bring their infamous … END_OF_DOCUMENT_TOKEN_TO_BE_REPLACED

Warm, funny and lacerating, Satinder Kaur Chohan’s new play opens with a fly-on-the-wall look at the daily attempts women make to be accepted and … END_OF_DOCUMENT_TOKEN_TO_BE_REPLACED