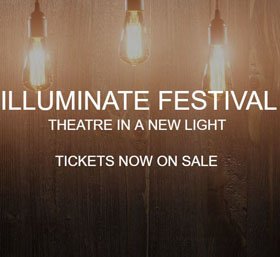 “After seven years there’s always a big change. Like the body it takes seven years for every cell to replace itself. Every seven years….”

Every Seven Years is a “two handed play” which tells the story of North East born Pam (Charlotte Baker) and Ralph (Ben Fensome) who hails from the South West. We first meet them when they are both approaching 21 and at university; the play then chronicles their life together including new borns, new jobs, milestone celebrations, sadness and fights. The two actors portray the same characters over a 63 year period and cleverly manage to depict the aging process by their stances/line delivery.

The play’s thought-provoking and sparky script and Scott Le Crass’s excellent direction enhance the production. Charlotte Baker gives an excellent performance as she brings the hard working, practical Pam to life; Ben Fensome is equally as good as the quieter, Ralph, who likes nothing better than playing a computer game or two. There is an excellent onstage chemistry between the actors as the play describes Pam and Ralph’s life together in series of recollections of their various life events including a wordless scene where the couple share a dance to Tina Charles’s “I love to love” at their 50th anniversary, this is followed by a touching scene where Ralph goes through his “memory box”.

The simple set is a kitchen table and two chairs surrounded by several cardboard “prop boxes” whilst the sound adds to the atmosphere of the various scenes.

The final scene is particularly poignant as the couple recollect their life together with both admitting that they’d find it difficult to live without each other.

‘’After seven there’s always big change. Like in the body. It takes seven years for every cell to replace itself. Every seven years…”

Every Seven Years charts Pam and Ralph’s life-long relationship. In jumps of seven years, we see them from their first fumblings at 21 through to old age at 84 – from newborns, new jobs, small talk, big fights, and all that life throws at them in between.
Running Time: 60 minutes (no interval)

How can a play be both charming and devastating? Through its tight script, abundant humour and pitch-perfect performances, 4th Country manages to … END_OF_DOCUMENT_TOKEN_TO_BE_REPLACED

Britain, so a London cab driver once told me, is obsessed with the Second World War, as though it happened just recently. Power Luncheon would seem, … END_OF_DOCUMENT_TOKEN_TO_BE_REPLACED

William J Dunleavy, author and star of this monologue play, is a writer and face to watch. He enters the room (as the staging is more geared towards … END_OF_DOCUMENT_TOKEN_TO_BE_REPLACED

Cirque du Soleil’s Luzia is a joyful whirl through a psychedelic Mexico, which reminds us why live theatre is so special. Anyone who goes to … END_OF_DOCUMENT_TOKEN_TO_BE_REPLACED