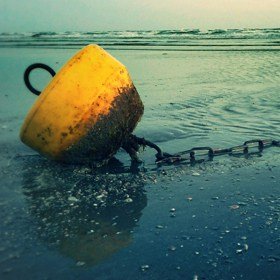 The Bedford is a fantastic little venue in up and coming Balham. Very lively and steeped in history and character; the perfect place to watch a little ‘Fringe Theatre’.

Black Shuck is a brilliantly written short piece by Duncan Hands. In one hour he manages to create an atmospheric scene that walks the fine line between comedy and horror. That’s how I like my horror; laced with a bit of humour so it’s not so scary. With just two main characters involved in one ongoing extremely dubious and totally illegal scenario. The space in time whilst we wait for ‘the delivery’ is spent watching a brother and sister in law squabbling and keeping their nerves on edge with the telling of a local legend; ‘Black Shuck’ the ghostly demon dog with the shaggy black hair and the burning red eyes! Tensions are fraught awaiting their shipment; family secrets a full moon hidden behind the clouds and a patrol of RAF planes overhead add to this jittery atmosphere. It reminded me what would happen if the cast of ‘Shameless’ were to attempt to become big time drug dealers – Chaos!

I cannot praise the acting highly enough. Rachel Nott is amazing as the tough girl, dragged up through the care system, doing anything and everything she has to, to support herself and her little sister Lucy. Rachel portrays Martha’s confident and controlling ways with humour and vulnerability whilst maintaining her tough exterior. Martha’s not a nice girl but you can see where she has come from and what she has been through and have a begrudging respect for her. Her partner in crime (literally) is Art her brother in law; married to her beloved little sister.

Art is played wonderfully by Alexander Pankhurst. He plays the simpleton whilst dropping in a wealth of knowledge about the natural world around him. Alexander’s comedic performance is a joy as there are so many layers to him; I very much enjoyed watching him swap from fool to expert and from light hearted to dark and back again. The most incompetent drug dealers you could choose and both with hidden agendas; what could possibly go wrong?

The production team are very much part of this show, mixing in radio conversations between the dodgy duo and their mysterious dealers and by utilising the little space they have creating the atmosphere well with well-timed lighting and in turn complete darkness alongside the constant sounds of the sea and the occasional howl of a dog… A very enjoyable hour with a very entertaining script and very talented actors. Well worth a watch.

“Sea-eagle to coot, come in please, can you hear me? Over.”
“Yes, yes, bloody yes!”
Rucksacks…Check. Walkie-Talkies…Check. Hip flask…Check. Gun…gun?!

Ruminating on the local myth of ghostly dog ‘Black Shuck’, two (inept) would-be smugglers await a shipment on the Norfolk Coast. Join us, where comedy meets horror in this hour-long new play by Duncan Hands.
More info at www.blackshawonline.com

Titus Andronicus is not usually a comedy, it is usually a bloody, villainous and vengeful tale, but tonight it is a comedy and a rather amusing one at … END_OF_DOCUMENT_TOKEN_TO_BE_REPLACED

This show is not without clichés - there are three of note in this production. Firstly, the French horn of the show’s title is personified, speaking … END_OF_DOCUMENT_TOKEN_TO_BE_REPLACED

There’s very little in the way of set in this show: aside from chairs, a few crash barriers and at one point, a red carpet, the actors’ movements … END_OF_DOCUMENT_TOKEN_TO_BE_REPLACED

South African born, but raised on the Isle of Man, Pierre Novellie is a true raconteur rather than just another 'stand-up' comedian. He says about his … END_OF_DOCUMENT_TOKEN_TO_BE_REPLACED

This show, Willy Hudson began by saying, is about himself. It is written by himself, is directed by himself and executive produced by himself. Almost … END_OF_DOCUMENT_TOKEN_TO_BE_REPLACED