If you want someone to tease out a story, if you want someone to winkle out the good bits, and the sad bits, the emotional bits and – crucially – the funny bits then Neil Gore is your go-to guy. And Townsend Productions, led by the indomitable Louise Townsend, would surely be your vehicle of choice to chauffeur the narrative around, perfectly conveying it to an audience. 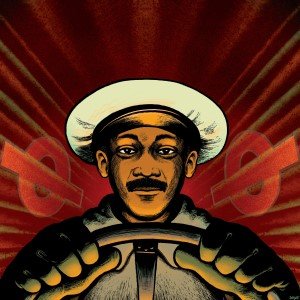 We would normally find Gore out front and centre stage getting chummy with his audience and delighting in the wink and the aside and the frequent hat-change as he takes on multiple roles. In Farewell to Leicester Square, though, he confines himself to some low-key squeeze-boxing in the corner. The performer in this one-person play, therefore, is newcomer Phillip Olagoke: and what a performer!

Olagoke has that intrinsic, inimitable gift of convincing us that we’re not sitting in a marquee in the car park of a provincial theatre but we are actually ‘there’, living it with him. And where is ‘there’? It starts in Jamaica from whence a young Joseph Clough is transported by his ‘master’ to be his driver in the cold but lively streets of London in 1908. His boss buys him woolly, itchy undergarments to be worn against the cold which young Joe doesn’t think he’ll need. But he does. Oh, yes, he sure does! Starting, therefore, as a horsey-carriage driver he soon graduates to one of those new-fangled horse-less carriages and there begins a career of driving everything from all kinds of buses, to taxis and, most poignantly, ambulances at Passchendaele. (Stickler for detail Gore tells us exactly what make and model each omnibus is).

With Olagoke we get passion and humour and panache and an evocative authenticity as he drives us through the streets of London and the lanes of Bedfordshire and the mud of the Western Front. This is a joyous journey of a
working-class immigrant who is a trailblazer for those who were to follow – after a couple of wars – in that newly infamous boat, The Windrush. Frankly, at this time, the ugly face of racism hadn’t taken hold and although there were some fairly minor instances experienced by the ‘dusky’ driver, generally this is an uplifting story of a West Indian who puts his roots down here, marries, has three children and is still fondly remembered in Bedford where he finally settled. Indeed, a ninety-three-year-old lady in the audience, who knew Joe and his family, was introduced to us after the show.

Here director Townsend has cast somebody who gets it and understands how to get it across and I’m going to be looking for great things from Olagoke in the future – he was trained at Central (School of – not Casting, that is) who has the potential to become as inspirational as Joe Clough, I believe. His is a masterful, empathetic performance that is going to wow audiences in all the al fresco spaces the production has lined up. Next stop Watford.

He is of course lucky to come under the spell of Townsend who directs with all her usual aplomb – and who, of course, is also a teaser, a winkler who knows instinctively how to get a story – with all its intricacies and narrative complications – to work successfully on stage. She has a great team to work with – an uncluttered and functional design by Ruth Darling complements the action, with effective Lighting by Danni Beattie. Music by Tayo Akinbode helps to create the atmospheric feel of the piece and the marquee venue adds a kind of circus-cum-music hall vibe to what is a truly delightful show.

Gore based his play on a poem by Abe Gibson and he and Townsend, of course, have an amazing track record together, with a whole series of plays about pioneering figures from social history. The first play of theirs that I saw was United We Stand which dealt with the Shrewsbury 24 whose convictions were recently overturned after a 47-year fight for justice. It is axiomatic, I believe, that the Townsend Productions show played no insignificant part in keeping this story high in the media consciousness and helped to get the convictions quashed.

As for Farewell Leicester Square: go see: you won’t be disappointed.

This play was first put on at The Mill at Sonning in early 2010 - the world has, of course, changed significantly since then, and the script has been … END_OF_DOCUMENT_TOKEN_TO_BE_REPLACED

It’s easy to see why the Orange Tree has brought this one back for another run, less than a year after its first outing here. This is a bold, … END_OF_DOCUMENT_TOKEN_TO_BE_REPLACED

I always loved Choose Your Own Adventure books. Definitely not the Steve Jackson ones where you had to roll dice (who did that?) to find out whether … END_OF_DOCUMENT_TOKEN_TO_BE_REPLACED

Well, there’s a bit about Pablo Picasso’s (1881-1973) paintings in this show that bears his name. But it’s mostly about his approach towards women. … END_OF_DOCUMENT_TOKEN_TO_BE_REPLACED