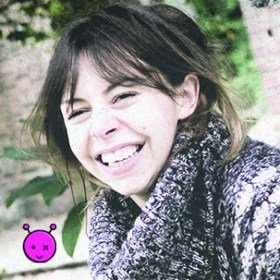 Everyone at some time has imagined the worst thing that could happen in their lives and how they would react to it. For the majority of us, these musings never get any further than a small shiver down the back and a thankfulness that nothing bad is really going to happen. However, for Georgie Morrell, the worst did happen and she is more than willing to share the story of how she coped with her one-woman show A Poke in the Eye.

Georgie was blind in one eye but managing to live the exciting life of a twenty-something in the bright lights of London when disaster struck and she lost the sight in the other eye and went completely blind. Her story could so easily be one of depression and unhappiness but somehow, Georgie, who is obviously an amazingly strong lady, manages to get a one-hour comedy routine out of it. Yes, the sadness is there – it would be impossible for anyone to be hit by sudden blindness and it not have a negative effect – but there is laughter as well. Dreamy voiced doctors, navigating the living room without kicking the dog, well meaning ‘friends’ coming to cheer you up, all of these have so much comedy potential and Georgie really knows how to bring her audience into her world where laughing at someone’s disability doesn’t feel wrong.

Watching the show, it’s obvious that Georgie is relishing every moment on the stage and it really comes across not only how strong she is but the strength of her family as the disembodied voices of her parents talk about their thoughts at the time. Although not seen, the family is there with her constantly and I have to say, her brother sounds like a really excellent guy in the way he handles Georgie and her lack of sight.

Without giving too much away, various parts of the show really stood out for me. The amazingly convoluted and bureaucratic discussion when applying for benefits was probably the biggest one for me. I’ve only, thankfully, had limited dealings with the people in Job Centres, or whatever they are called this week, but I was instantly back there filling out forms in duplicate and trying to convince the person behind the desk – who doesn’t make the rules – of the validity of my claim. You would think, being Blind, it would be pretty easy for Georgie but her interview was a wonderful example of bureaucracy at its best.

Ultimately, A Poke in the Eye was surprisingly funny and not at all what I was expecting. I, along with the rest of the audience was thoroughly entertained. In my mind, I would have loved it to go on longer but then realised that we were dealing with someone’s disability here. I have to admit that if the worst ever happens to me, I hope I can face it with half the strength of character that Georgie showed because then I know I will survive.

One woman. One eye. And her (sort of) blind life…
The debut standup show from comic, Georgie Morrell. Using her wit, charm, sounds and illustration Georgie tells the story of how she went blind but now she can see…literally

Do your other senses really get stronger? Is it wrong to crack onto your doctor? Will I get a new eye that shoots lasers? Just some of the many questions our heroine answers whilst telling us how she went blind but now she can see… literally.

Recounting stories of doctors, sexual fantasies, binge drinking, (sometimes all at the same time) and family dramas. We hear a unique account of what it is to face inevitable blindness with her very own brand of humour.

I have seen some outstanding acting recently at the intimate Finborough Theatre, and this new play is no exception. The highly talented cast quickly … END_OF_DOCUMENT_TOKEN_TO_BE_REPLACED

In the pandemic (remember that?) I worked in adult social care. My role was to help older people in their own homes with daily tasks - I’d cook meals, … END_OF_DOCUMENT_TOKEN_TO_BE_REPLACED

The world-famous Wilton’s Music Hall and the children’s classic The Wind in the Willows make perfect bedfellows. Piers Torday has written a version … END_OF_DOCUMENT_TOKEN_TO_BE_REPLACED

Some journalists get, as it were, a bad press, though some of them don’t help themselves with some of the things they write and do. This play doesn’t, … END_OF_DOCUMENT_TOKEN_TO_BE_REPLACED

Paul (Lewis Bruniges) and Freddie Metz (Oliver Yellop), who identify as cousins, are so desperate to get out of the German Democratic Republic, … END_OF_DOCUMENT_TOKEN_TO_BE_REPLACED