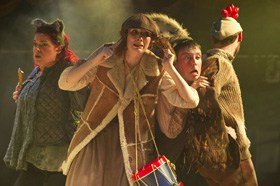 Stoke Park in Guildford is big; bigger than I thought it was. To find the venue from the Spectrum Leisure Centre car park, I should have crossed the road and turned left; I didn’t and walked almost all the way around Stoke Park before retracing my steps and finding the cosy little tent. When Gretel complained that she had been walking in the woods for hours, I knew how she felt! The Mirror Tent was lovely: it had more of the feel of a homely old pub than a circus big top and was warm and comfortable.

There are apparently over 200 Grimm’s Fairy Tales but this evening we had a whistle-stop tour through just ten: Hansel & Gretel, Little Red Cap, The Town Musicians of Bremen, One-eye, Two-eyes and Three-eyes, Rapunzel, Frog Prince, The Elves and the Shoe Maker, Cinderella, and Rumplestiltskin. The evening began with the story of Hansel and Gretel but the tales were cleverly interwoven as Hansel and Gretel made their way through the forest and they told their own story before being told the rest of the tales. The small cast were brilliant at switching from one character to another.

These Fairy Stories were rather brutal versions of the originals and were not sickly sweet as some modern versions are. Don’t worry about bringing boys to see them; Hansel soon let us know how he felt about yucky fairy stories and he made sure everyone would enjoy them. Children were made to feel very special, not in a way that the shy ones will hate, but so they could join in from the safety of their seats, by holding the woodland flowers for Little Red Cap to pick or the pebbles to help Hansel and Gretel find their way home.

Andy Owens and Amelia Zadarnowska led us through the stories as Hansel and Gretel but also took on many other parts: Andy’s Grandma was very funny, reminiscent of Mrs Brown’s Boys only funnier! Rosie Strobel was both funny and scary as the Wolf and Sorceress; she has a wonderful singing voice and also plays violin throughout the evening. Dominic Rye is a wonderful comic actor and he shone as a Cockerel, Three-eyes, a squire and finally Rumplestiltskin. I challenge you not to laugh out loud when he appears on stage. Charlotte James switched from a Wicked Step-mother to beautiful Princesses with ease and sang beautifully, particularly when she dueted with Andy Owens. Andy and Amelia also sang a lovely duet together in Cinderella.

This is a charming production from a great local company. Take your whole family!

GRIMMS’ FAIRY TALES
8th to 30th October 2016 The Mirror Tent, Challengers’ Stoke Park, Guildford, GU1 1TU
NB During the performance there will be moments of flashing lights and mild use of theatrical haze.
http://www.guildford-shakespeare-company.co.uk/