Home » Reviews » GIVE ME YOUR LOVE at Battersea Arts Centre – Review 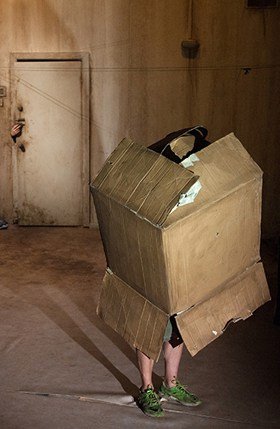 Give Me Your Love, a transfer from Melbourne now playing at the Battersea Arts Centre until the end of the month, capitalises on a current and noteworthy discussion, that is, the use of recreational and, hitherto, illegal drugs in the battle against psychoses, specifically Post Traumatic Stress Syndrome. The company performing, Ridiculusmus, has a host of successes under their belt which stem from a personal motivation to discuss such radical ideas surrounding mental health, one such being The Eradication of Schizophrenia in Western Lapland. While it is a valid compunction to dramatise your own experience, the role of the dramatist is to present the issue, here PTSS, within a story or setting that offers a unique understanding of the problem with depth and conviction. In some ways this production, while pertinent, well produced and moving, lost sight of the overall force of its potential message, and instead became just another ‘horror of war’ story.

Written, directed and performed by the same duo, David Woods and Jon Haynes, there is no doubt that this pair have skills in all three arenas; the play is wittily written, intelligently staged and artfully performed. They fully achieve their intent to dramatise serious issues with comedy; the play is both darkly stark and outrageously hilarious. That being said, I feel that this production would have benefitted from outside talent. Theatre is a collaborative process, no matter how talented the individual at the centre and there are several ideas which perhaps could have been further developed with a third, fourth or even fifth eye nurturing the production.

Despite claiming to be about the use of MDMA in the treatment of PTSS, an important debate, especially in light of a recent documentary about the positive theraputic uses of DMT, the presentation of the drug and it’s effects was very prematurely abandoned in the play, and the writing came down on neither side of the fence about whether the use of MDMA in this context might be a good thing. It felt uninvested and frustrating to watch a play that posed a question to which it suggested no answer. It is ambitious to produce an hour long play about a relatively short and minor experience of MDMA and the initial dynamic thrust of the piece quickly dissolved. That didn’t dilute the comedy that resulted from a man’s first experience of ‘coming up’ on MDMA and the hour long piece was highly watchable. It was a questionable choice to maintain the conceit of never seeing the protagonists on stage. Whilst this had the purpose of diffusing the reality of Zach’s experience, it hindered audience understanding of both PTSS, which is still a vastly under discussed state, and the potential of psychedelic drugs in its treatment. Both conversations seemed stunted.

It is my feeling that this play done in this manner would have worked better within a series of linked one act plays or, as a theme, as a part of a larger dramatic piece. It remains an entertaining and important piece and a topic that will surely be revisited in theatre until the discussion on the use of psychedelic drugs becomes more widespread.

Ridiculusmus return with a show about Post-Traumatic Stress and the therapeutic effects of MDMA. Welcome to the world of war veteran Zach. As the last man standing, he has retreated into a tiny dugout under a barrage of hostile fire.

His enemies are cunning, using every trick in the book to mess with his mind. Even the landscape is weird… it’s a cardboard box, in Zach’s kitchen. His wife whispers, kindly, that it’s safe to come out. But is it a trap? For if the real enemy is Zach then who will win if he loses?

Informed by the latest scientific research into the use of MDMA to treat Post Traumatic Stress, Give Me Your Love uses wit, warmth and black comedy to explore the healing potential of altered states of consciousness. Give Me Your Love is the latest show from the multi-award winning theatre company behind The Eradication of Schizophrenia in Western Lapland.

It is 2002 – another Royal Jubilee year, and HRH (Mary Roscoe) is due to open a new Science wing in a 'sink' comprehensive where Dr Derek Jones … END_OF_DOCUMENT_TOKEN_TO_BE_REPLACED

Dr Anna LaRosa (Dr Stefania Licari) has a lot to say. Just as well, as she’s the only one on stage in this medical comedy, which largely draws its … END_OF_DOCUMENT_TOKEN_TO_BE_REPLACED

Nikhil Parmar’s one-man show, originally written as a TV pilot, manages to touch on a wide range of themes from Islamophobia to modern fatherhood with … END_OF_DOCUMENT_TOKEN_TO_BE_REPLACED

Handel’s 1738 opera Serse (or Xerxes) is an exploration of power, love and human frailty. King Serse falls in love with the voice of his brother … END_OF_DOCUMENT_TOKEN_TO_BE_REPLACED

Lea Salonga has her fans. She also has some superfans, the ones who yell, “I love you Lea!” at almost every opportunity. If that wasn’t enough, there … END_OF_DOCUMENT_TOKEN_TO_BE_REPLACED