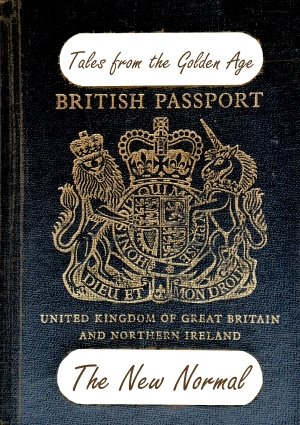 This probably isn’t the sort of show needed right now – a dystopian vision of 2024, in which the Government’s responses to both Covid-19 and the departure of the United Kingdom from the European Union have been utterly disastrous in every conceivable way. The sole winners in Ian Dixon Potter’s monologue, The New Normal, appear to be Nicola Sturgeon’s Scottish National Party, who – spoiler alert – have become a rare breed of political party in achieving what they set out to achieve, and have gained independence. The news bulletins (read by Robin Lustig) in between each scene don’t, to the best of my recollection, say much about the state of the Scottish economy, but the state of the English one is quite terrible, to say the least.

Dorothy (Kate Carthy) tells her audience all about her own life and that of her son Ralph. There are times when one wonders whether she is holding some stereotypically outmoded views about ‘foreigners’ but it is worth bearing with the production, if anything because Carthy’s portrayal of the character is so highly convincing. It is difficult to agree with everything Dorothy says, and she occasionally contradicts herself. And what does it really mean, for instance, when she says, “I think the Daily Mail has it about right”, given that newspaper had a change of editor in 2018 and is now therefore led by a Remainer?

Ralph has managed to get a new carer for the ageing Dorothy, something that has been very difficult to achieve because the care industry imploded after so many older people died in the pandemic and employment opportunities were and still are (in 2024) much brighter in other countries. The problem is that Heidi, the new carer, isn’t a British subject, and for reasons unexplained in the narrative didn’t apply for British citizenship or the EU Settlement Scheme. It is almost laughable that Dorothy eventually becomes accused of “harbouring a foreign fugitive” – it’s the kind of dark humour that consistently permeates the show.

As ever with single-character performances, there aren’t opportunities to see things from the perspectives of the other characters – it would, for instance, be interesting to know what Ralph and Heidi’s thoughts were from a first-person narrative. The concluding remarks are a fine and intriguing twist, and a viable solution for the trio, though probably not one Dorothy had previously envisaged.

Some finer details of the plot could be tightened a little, but on the whole, this monologue is thought-provoking and absorbing.

The year is 2024. A dark cloud hangs over a broken and vastly impoverished nation, its influence and standing in the world severely diminished. What remains of the United Kingdom is isolated from its neighbours, the union with Scotland has collapsed and war had broken out across the heavily fortified Irish border. Society is riven with division and conflict creating an atmosphere of enmity and distrust. One half of the population despises and derides the other half. The authority of the populist government has been fatally undermined by their inept and short-sighted handling of both the coronavirus pandemic and the nation’s chaotic and destructive departure from the European Union. Against this background and against all the odds, Dorothy has finally found a new carer.