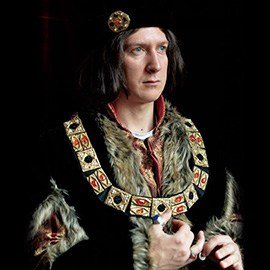 I suppose ‘Not Quite As Evil As All That King Richard’ is too unwieldy a title for a play. Without going into too much detail (and goodness me, there’s a lot of that in this play, though apparently less than its previous incarnation at the White Bear Theatre late last year), it encapsulates more accurately the gist of Good King Richard. One only has to look at the widely differing obituaries of Baroness Thatcher from a couple of years ago to notice that even modern public figures are either loved or loathed.

Rightly or wrongly, the prologue to this play implicitly assumes the audience has at some point seen some production or other of Shakespeare’s Richard III. This ‘correction’ to that play even has Richard (Nicholas Koy Santillo) stand upright as opposed to the hunchback position we’re so used to seeing on stage.

Shakespeare, in any case, generally liked to go for dramatic effect over historical accuracy, and while there’s no doubt this play has been very thoroughly researched, it’s still some people’s words against some other people’s words. The recent Dame Janet Smith report into historic instances of abuse on BBC premises expresses well the frustration of not being able to hear evidence from certain key people because they are dead; it’s pretty much impossible here to really state that this (or any other play about Richard III) is the definitive word on what happened.

This production doesn’t have the edginess of the Shakespeare play. There are no ghosts barking “Despair and die!” and Richard isn’t left yelling “My kingdom for a horse!” In fact, there’s not a huge amount of yelling at all, perhaps the greatest (and for me, the most welcome) change from a Royal Shakespeare Company or National Theatre production of the Bard’s version of events. The hair dryer treatment is swapped for (mostly) civilised conversation, and infinitely more informal – Earl Rivers is referred to by his birth name of Anthony Woodville (Will Mytum), for instance.

It all certainly comes across as well-balanced for the most part, rather like an academic essay that presents an argument from several viewpoints. I say ‘for the most part’ as Henry Tudor, later Henry VII (also Will Mytum) is depicted as a spoiled and inept ‘mummy’s boy’, which, while very amusing, seems as though it’s a swipe at the House of Lancaster, and, more to the point, probably not entirely accurate.

Richard, meanwhile, is not exactly portrayed as The Man Who Can Do No Wrong, but, almost as though he were an interview candidate for the monarchy, his weaknesses are presented as honourable ones. For instance, he’s ‘too’ trusting, particularly of the Duke of Buckingham (Tom Everatt), though I note with interest that Buckingham was born into the House of Lancaster (Richard being a Yorkist). Perhaps Richard should have known better, and the play does not flippantly dismiss this point.

The set, rightly or wrongly, is more fit for the sparse dungeons for Richard’s detractors, than for any sort of royal residence. At least the costumes were suitable, and the script engaging. This is intelligent and intelligible theatre, and whatever is lost in dramatic licence is more than made up by some excellent acting, a steady-paced narrative and what my fellow theatregoer described as “random hilarity”. This is just the ticket for anyone who would like to discover an alternative point of view from the mainstream. Thinking about it, maybe Very Good King Richard is a more appropriate title than the one I started this review with.

History is always written by the victor. After Henry Tudor defeated Richard III at the battle of Bosworth, Tudor historians created the elaborate fiction of a deformed usurper who schemed and murdered his way onto the English throne. But who was the real Richard III?

Drawing on contemporary sources, unsullied by Tudor propaganda, ‘Good King Richard’ dramatises for the very first time, the true events which propelled Richard onto the throne of England and two years later, led to his downfall.

This is a tale of murder, betrayal, rebellion, revenge and political intrigue, starting with the drowning of the Duke of Clarence in a butt of Malmsey and ending on the eve of the Battle of Bosworth.

A century after Richard’s death a celebrated play was written, based on the testimony of his greatest enemy, Cardinal John Morton. Over four centuries later, Good King Richard finally sets the record straight.

This isn’t the first production to go down the road of referencing a one-star review of their show (from a different publication, I hasten to add). … END_OF_DOCUMENT_TOKEN_TO_BE_REPLACED

Two sisters reunite after the death of their mother, and secrets pour forth. Robert Holman’s new play gently exhibits talented classical acting in a … END_OF_DOCUMENT_TOKEN_TO_BE_REPLACED

Everyone’s vexed in this show, though some have clearer reasons to be than others. Mrs Driscoll (Tameka Mortimer) is struggling with a home life that … END_OF_DOCUMENT_TOKEN_TO_BE_REPLACED

The penultimate production of the 2021 Tête à Tête Opera Festival, based at London’s Cockpit Theatre and showcasing contemporary and avant-garde new … END_OF_DOCUMENT_TOKEN_TO_BE_REPLACED

Relatively Speaking premiered in 1967 and is the sort of show that is, by contemporary standards, very much of its time, and not just because of … END_OF_DOCUMENT_TOKEN_TO_BE_REPLACED