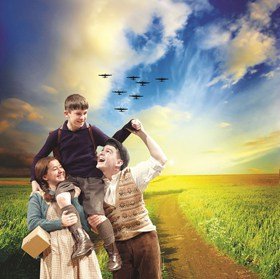 “Wish me luck as you wave me goodbye,” is the war-time song that opens Goodnight Mister Tom at the Duke of York’s Theatre in the West End. It draws the audience in to the story right from the start. David Wood’s adaptation of Michelle Magorian’s children’s classic is always a tear-jerker but with war, God and abuse of children so present in the public mind this Christmas, this one is particularly evocative. The song is a theme that occurs throughout, the pure treble voices of the boy performers bringing an innocence to loss and love against a background of war.

Angus Jackson, the director, has worked his magic once again. The play ran originally at Chichester, then did a West End run, succeeding Blood Brothers at the Phoenix, and touring. This is its third run to be followed by a tour and it shows every sign of being an enduring classic. Each time the show stays roughly the same, but small changes, such as in costume and staging, finesse it just that little bit further towards perfection. The Duke of York’s Theatre is a beautifully warm and intimate setting for this special play.

We found it particularly poignant because our son Arthur Franks played William Beech in the last run, in the West End and on tour. Another former William, Jamie Goldberg, came as well. Child licensing laws mean as many as three or four children share professional stage roles in this country. Freddy Hawkins, Joe Reynolds and Alex Taylor-McDowall have been cast this time in the role of William, and Sonny Kirby, Oliver Loades and Harrison Noble as Zach. It is an enormous privilege and life-changing for any child to find themselves in such a role. It is also quite different watching a professional show when you have a young child performing in it, to when you watch it as a normal theatregoer. I was able to appreciate in a more objective sense just how powerful this production is.

The William we saw, Alex Taylor-McDowall, delivers a superbly nuanced performance. He progresses credibly from an abused, beaten, timid and illiterate boy to a confident, resourceful child with a remarkable gift for drawing.

The man who brings this about is Tom Oakley, after William is placed with him in the country as a refugee from London. David Troughton is simply outstanding as Mister Tom. His strong, rich performance centres the story around the heartbreak of a man who shut himself off from life and love after he lost his young wife and baby son through childbirth. Just as Oakley’s love transforms William Beech, the boy’s growing trust and dependency on him breaks through Oakley’s shell with unbearably touching consequences.

The part of the irrepressible tap-dancing Zach is an absolute gift for the right boy and Oliver Loades made the most of it. He sparkled on the stage with a brilliant zest for life that had us laughing and crying at once. He had good comic timing in the superbly written scene about how babies are made. This one always reduces audiences to helpless laughter, especially the raucous teen school audiences in the provinces when it goes on tour. Surely the hardest thing William and Zach have to do in the entire play is to keep a straight face while 1,000 giggly teens are collapsing in hysterics in front of them.

The puppet dog Sammy is once again a show-stealer. Puppeteer Elisa de Grey has returned and she does a brilliant sheepdog to the extent we forget she is there at all, so convincing are the growls, whimpers and generally doggy behaviour of this lifelike creature. The adults who play the other children double up in several roles. Clark Devlin as George was particularly strong as the bully who became a friend and who suffered his own grief. We loved Hollie Taylor and Martha Seignior as Ginnie and Carrie, characters into which the author has packed so much to do with the emerging feminism and the importance of education of the war years. A special mention also for stalwart Georgina Sutton in the role of Miss Thorne, such a model of the acting craft.

The theme of cruelty licensed by falsely-understood religion is one thread around which the story hangs. Death is everywhere, yet the play hums with life and love. Arthur, in particular, was impressed. “It was a spectacular performance by the whole cast. It brought back many moments of nostalgia. I’m so glad I saw it again.”

The novel Goodnight Mister Tom is now a modern classic and is celebrating its 35th anniversary. Michelle Magorian’s wonderfully uplifting tale is brought gloriously to life in this magical stage adaptation by David Wood. Set during the dangerous build up to the Second World War, Goodnight Mister Tom follows young William Beech, who is evacuated to the idyllic English countryside and forges a remarkable and heart-warming friendship with the elderly recluse, Tom Oakley.

This show is not without clichés - there are three of note in this production. Firstly, the French horn of the show’s title is personified, speaking … END_OF_DOCUMENT_TOKEN_TO_BE_REPLACED

There’s very little in the way of set in this show: aside from chairs, a few crash barriers and at one point, a red carpet, the actors’ movements … END_OF_DOCUMENT_TOKEN_TO_BE_REPLACED

South African born, but raised on the Isle of Man, Pierre Novellie is a true raconteur rather than just another 'stand-up' comedian. He says about his … END_OF_DOCUMENT_TOKEN_TO_BE_REPLACED

This show, Willy Hudson began by saying, is about himself. It is written by himself, is directed by himself and executive produced by himself. Almost … END_OF_DOCUMENT_TOKEN_TO_BE_REPLACED

The rough and tumble of secondary school life is not a time I recall with fondness by any stretch of the imagination – at the time, if anyone said, in … END_OF_DOCUMENT_TOKEN_TO_BE_REPLACED