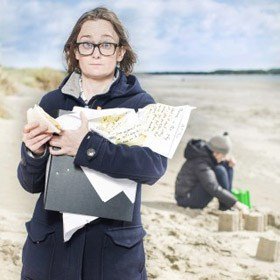 A fling with an alien becomes a thing with an alien becomes a ring with an alien. Upstairs at Soho Theatre, Sonya Kelly takes us through the story of a love affair that starts during a rehearsal process of a play she’s not enjoying working in, and doesn’t want the affair to end just because one of them has to go back to Australia because her visa has run out. As the relationship blossoms, the pair have to face the Irish immigration authorities for the Australian, Kate, to get a permanent visa so they can stay together.

In the middle of what some call the migrant crisis, where the newspapers and online comment sections are overwhelmed by shrieks of how people from other countries can just waltz into Europe and start grabbing our money, How To Keep an Alien is a refreshingly realistic portrayal of how difficult it actually is to be allowed to stay in an EU country. The paperwork fills a thick binder that Sonya refers to throughout the show. It’s a frustrating process that nearly drives her insane, and the pressure it adds to the still very fresh relationship is almost enough to break them.

The story is told vividly by Sonya, who bravely lets us in to show her insecurities, her personality and her big, beating, in love heart. It’s a funny and compelling show with lots of laughs and a well told narrative. It also shows Sonya coming to grips with letting people in, not just her girlfriend Kate, but her family. There’s a lovely moment where Sonya lets go and accept the ‘cling of an alien’ as she says. It’s an interesting take on relationships, family and what it means to love someone for who they are.

But then, just as you’re sitting there enjoying a nice story, a montage starts playing on the backdrop, a montage of pictures, letters and recordings, and then you suddenly get it – Sonya isn’t acting out a story of her imagination. What we’ve just watched is the story of two women falling in love and finding their way to stay together, as it actually happened in real life. As we leave the theatre, both of us grinning happily, we’ve also fallen in love with them a little. How lovely it is to see a true portrayal of true feelings, without ironic distancing or cynicism. It’s beautiful. They’re beautiful.

Love is quite spectacular, when you’re lucky enough to find it. It’s nice to be reminded that there are good things out there. Kelly is energetic and compelling, an impressive one woman (with assistant) show. It’s a charming piece that will make you smile.

A story about falling in love and proving it to the government. Sonya Kelly (The Wheelchair on my Face, Fringe First Award 2012) is back with a tearfully funny, tender memoir about securing an Irish visa for her Australian partner.

Join her madcap odyssey from the stony townlands of Ireland to the leafy depths of the Queensland bush.

It’s a tricky business coming from opposite ends of the earth. It takes an Olympian will and the heart of whale, but above all else, paperwork. It takes a hell of a lot of paperwork.

It is 2002 – another Royal Jubilee year, and HRH (Mary Roscoe) is due to open a new Science wing in a 'sink' comprehensive where Dr Derek Jones … END_OF_DOCUMENT_TOKEN_TO_BE_REPLACED

Dr Anna LaRosa (Dr Stefania Licari) has a lot to say. Just as well, as she’s the only one on stage in this medical comedy, which largely draws its … END_OF_DOCUMENT_TOKEN_TO_BE_REPLACED

Nikhil Parmar’s one-man show, originally written as a TV pilot, manages to touch on a wide range of themes from Islamophobia to modern fatherhood with … END_OF_DOCUMENT_TOKEN_TO_BE_REPLACED

Handel’s 1738 opera Serse (or Xerxes) is an exploration of power, love and human frailty. King Serse falls in love with the voice of his brother … END_OF_DOCUMENT_TOKEN_TO_BE_REPLACED

Lea Salonga has her fans. She also has some superfans, the ones who yell, “I love you Lea!” at almost every opportunity. If that wasn’t enough, there … END_OF_DOCUMENT_TOKEN_TO_BE_REPLACED