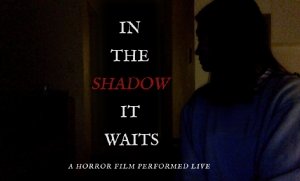 I’m still not sure what the most frightening element of In The Shadow It Waits really is – is it the events that happen to the characters, or is it the idea of a very extended period of lockdown? (An exact number of days is given to the audience, but let’s not give everything away.) A relatively short live experience, the set-up is quite straightforward, and, at least in terms of the background story, believable. While the consequences of playing an online game – which can actually be viewed online at www.billybillybilly.net – are accompanied with all the pops, whizzes, sound and visual effects that one would reasonably expect from a horror film, there’s also the right amount of backstory to both maintain interest and to build suspense as the action moves from character to character.

This is almost like going back to the days of films like Psycho, which are somewhat tame by today’s standards, partly because of the ability of the larger film studios with deep pockets to make movies as gory as they please, within, of course, the boundaries laid down by film censors. The cumulative effect of each critical incident in this production becomes a little repetitive. But – credit where credit is due – there are marks to be awarded for consistency. Rather like The Blair Witch Project, the collective footage of the show’s characters will be discovered sometime after the events of the show have transpired.

Things start quite innocently – one might even say tediously – with a team meeting including new recruits to customer service jobs (the audience is, mercifully, spared ‘death by PowerPoint’). But Pat (Robert Pham), the meeting’s chair, is already concerned when one of the new recruits don’t return to the Zoom room after the lunch break (it’s that long a meeting) and isn’t answering their phone. He is palpably shaken the following morning – well, things that go bump in the day as well as the night – with the sense that things are not as they should be compounded by colleagues’ remarks that Pat is behaving distinctly out of character.

Different people respond in different ways, and for all the paranormal activity, there is even time in the dialogue for twists and turns in relations between Jace (Eddie Orton) and Hanna (Nalani Wakita), made all the more complicated as the latter is self-isolating with housemate Steve (S.C. Wilson) rather than with her partner. Pat, meanwhile, is in regular contact with friends and family who are in Vietnam (the show is set in Australia), while Jules (Vessela Karadjova) is one of those social media influencers with daily updates for her followers to enjoy. Completing the set of characters is Meg (Naomi Plucke) – let’s just say the audience doesn’t get to see much of Meg for narrative purposes.

There are opportunities for further plot development, perhaps (but by no means necessarily) in a sequel. Taken together, the action moves briskly, and with multiple stories taking place, the production flits between them remarkably seamlessly given the technological challenges involved. The storyline itself may not have been all that ground-breaking but as a ‘live in lockdown’ production, it’s amongst the best, with the sound levels evenly balanced and every line of dialogue crystal clear. I kept forgetting I was watching a live performance and not a recording – it’s refreshing to not have to be conscious of maintaining a suspension of disbelief.

Award-winning director Michael Beets will premiere his latest film experience IN THE SHADOW IT WAITS on Thursday 4 June at 8.30 pm.

But this is no ordinary film experience.

IN THE SHADOW IT WAITS is a horror experience performed live and edited in real-time with actors performing from their own homes in different states across Australia. The audience is witnessing a film being made as they’re watching it.

The experience tells the story of four twenty-something co-workers bored with their day jobs and sick of being locked up in isolation, who play a silly online game and unwittingly prove the truth of an urban legend. And while these co-workers might not be able to get out, it doesn’t mean that something can’t get in. Would you dare to play? www.billybillybilly.net

100% of all tickets will go directly to everyone in the production – the actors, filmmaker and tech crew. The audience is invited to meet the artists they’re directly supporting through a virtual Q&A and drink after each performance.