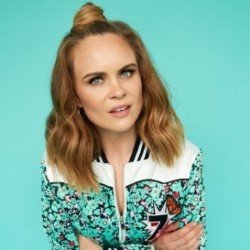 I wasn’t the only one slightly disappointed that a show called The Prosecco Express doesn’t involve the consumption of prosecco either before, during or afterwards (unless, of course, as I found myself doing later that evening, buying one from the bar). The usual banter that comedians tend to have with the front row was warm and engaging, made all the more so by a rather reticent boyfriend of a project manager for apps and websites.

McNally’s lines of arguments are persuasive, even if one knows they are formulated, at least to some extent, for comic effect. An example: when she asked a friend why pregnant women mustn’t have any prosecco at all, she was told that alcohol consumption could lead to the baby having an abnormally small head. McNally’s response was simply to state that this would surely lead to a less painful delivery. (For the record, the risks are more complex and severe than that, and include learning difficulties and behavioural problems.)

Some of McNally’s friends of similar age (she is thirty-six) are already on their second marriage, while she is yet to settle down in the first place – and, as voyage of self-discovery comedy usually conclude, it is better to be contented than not, irrespective of relationship status. Her sense of frustration is understandable, given that she’s been both geographically and financially inconvenienced by gracing other people’s weddings with her presence and her gifts. And her punchlines about sexual relations were not always predictable – her ridiculing of doggy style being ‘intimate’ is particularly amusing: “Intimate? I’m looking at the wall!”. While perhaps not everyone’s cup of tea (or glass of prosecco), this is a comfortable and assured performance.

Joanne is lost (not physically, she knows exactly where she is: she’s in Leith). But adopted at six months old,
she has no real sense of who she is. She has never looked like anyone and the life she’s wearing doesn’t fit
very well, so Joanne wants a rock-solid blueprint to follow. What is she supposed to be doing with herself?

Shoes, one would have thought, are fairly recession-proof. The problem for Charlie Price (Joel Harper-Jackson, reprising the role he previously played … END_OF_DOCUMENT_TOKEN_TO_BE_REPLACED

The descriptions of what happens in this show are so vivid that paradoxically they leave nothing to the imagination – and, at least at the performance … END_OF_DOCUMENT_TOKEN_TO_BE_REPLACED

Although not entirely perfect, this staging – the first ever in the UK – of Pablo Sorozabal’s Zarzuela (Spanish Operetta) is brilliant, atmospheric, … END_OF_DOCUMENT_TOKEN_TO_BE_REPLACED

As theatre productions go this is a memorable, magical experience filled with heart and love and so many tiny thoughtful details, that I’m not sure a … END_OF_DOCUMENT_TOKEN_TO_BE_REPLACED