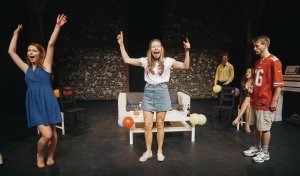 There have been simmering tensions for some time between Roy (George Lewthwaite) and his wife Sam (Lucrezia Galeone). Roy’s best friend forever is Aaron (Ciaran Lawless) and Sam’s best friend forever is Claire (Emilie Finkielman). The four have been gathering each Friday night for drinks and ‘truth or dare’ type games. Aaron, in turn, is seeing Laz Annya (Nia Vasileva) – which lead to inevitable punchlines about pasta (which, to be frank, got rather boring very quickly), exacerbated by her speaking in fluent Italian and extremely limited English, and Claire is going out with Chris (Vincent Rosec), a Frenchman.

It’s Laz Annya who greets the audience on the way in, with a broad enough smile and the hope that we will enjoy “Tee-jiff”, as she calls TGIF. Once the evening’s proceedings has run its course, she reaches the conclusion that the main quartet – Aaron, Roy, Sam and Claire – are a “bad family”, and there is eventual agreement on this point, even if it is reached well after she has left the building.

Completing the set of on-stage characters is next-door neighbour Todd (Rian Wunderlin), who hasn’t got much to do except perform a running gag about him having to work in the morning and threatening to call the police if noise pollution doesn’t cease forthwith.

Given the American setting, it’s a surprise that guns weren’t brought out when things got aggressive and confrontational. There are affairs, and rumours of affairs, and while the truth comes out eventually, this is one of those situations that may have never arisen if people were simply humble and honest in the first place. But there’s an instinctive need to try to impress, especially when one is courting, and it’s interesting to observe quite how far the men in this play are prepared to go, ostensibly in the name of love.

I must admit I was as clueless as Chris as to why Sam insisted on referring to him, including to his face as ‘Mr Pebbles’, and as civilised conversation rather quickly descended into something from an episode of The Jerry Springer Show. I have some reservations about making fun out of someone just because their command of English is far from fluent – there is little to be gained in deriding such people: after all, they speak another language. But then again, perhaps the play was seeking to highlight the relative prevalence of such a viewpoint.

Some good acting is to be enjoyed in a show where the likes of Aaron and Roy come of age rather later than they should have done. The plot feels a tad implausible, but nonetheless, it’s a briskly paced and somewhat sardonic production.

TGIF is the best worst episode of Friends you’ll see this summer. Four best friends meet every Friday night to play their favourite games. This Friday, the gang has two new members. One of them is hiding a dark secret which is about to be revealed. The perfect anti-sitcom is finally brought on stage – hilarious, surprising and twisted, this play will show you how toxic friendships can become and how, in one night, your life can be changed forever.