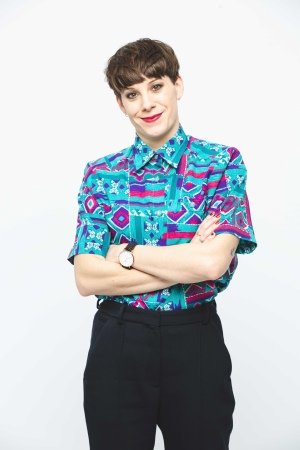 Suzi Ruffell is, as things stand, very happy. Which potentially makes for a stand-up show that’s terrible at worst and unconventional at best, because comedy is, generally speaking, best when it’s about how bad someone’s life is, and therefore the audience can at least feel relieved that, whatever issues they are encountering at the time, they are relatively minor to that of the comedian’s, or rather the public persona that comedian has created during the show for the purposes of making people laugh.

Dance Like Everyone’s Watching proves that, to quote the American opera Porgy and Bess, it ain’t necessarily so. It’s certainly been an eventful year for Ruffell – she and her partner have moved out to an “affordable part of London”, otherwise known as Kent, and she counts her true friends as the ones who are prepared to travel out beyond the Oyster card travel zone to visit. She’s also became acquainted with her new neighbours reasonably well, not least in part thanks to an overly active WhatsApp group. The title of the show is derived from Ruffell’s mother misreading a sign in a branch of Wilkinson’s, which actually read, ‘Dance Like Nobody’s Watching’ (a call to let one’s inhibitions go, seize the day, and so on). When Ruffell clarified the exact wording, her mother drily responded, “Why would anyone want to do that?”.

Ruffell is also exploring having a baby, being in a same-sex relationship means exploring options with her doctor. A detailed recounting of a smear test proves hilarious, with the use of a microphone stand in a way that I don’t recall ever seeing before, and a deeper undertone when it comes to a medical student tasked with punctiliously going through a questionnaire with Ruffell: the said questionnaire, if not the questioner herself, can’t seem to take into account the situations of non-straight couples, and thus Ruffell feels she must ‘come out’ yet again.

On a lighter note, her reminisces of World Pride 2019 in New York City left her repeatedly crying tears of joy. A very brief moment is given over to asserting methods by which the recent noticeable increase in LGBT+ hate crime might be addressed. With just a smattering of audience banter throughout, it’s an hour of joy and happiness, which the world as it stands could certainly do with.

Suzi has made a name for herself turning tragedy and anxiety into big laughs. This year, she is happy. This show answers the question: are all stand-ups at their best when they are miserable? Fingers crossed no. The last 12 months have been massive for Ruffell, a smash-hit UK tour, heaps of television appearances including Live At The Apollo and she’s learnt how to make the perfect lemon cake. Come and see what all the fuss is about!