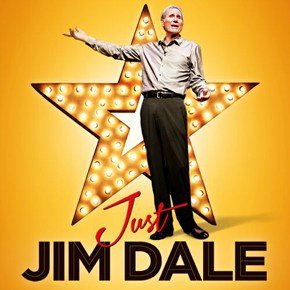 A couple of hours listening to an (almost) octogenarian telling stories of the past, sounds like it could be quite a task. Unless, that is you are listening to stories from the mouth of Jim Dale. As a mere flibbertigibbet of 45, I don’t remember him before the “Carry On” era but in his award winning show you will discover that there is so much more to this fascinating man. From his humble beginnings as Jim Smith to the present day, he definitely has stories that make for an enthralling evening.

Before I carry on….. (see what I did there?) I must give a quick note for my regular readers; Mr Smith was replaced for this evening. Instead, I was accompanied by, let’s call him Mr Jones. More from him later.

So, back to Mr Dale. Within moments of him walking on stage, it is clear that we are witnessing a consummate professional at work. He exudes presence. Accompanied by his pianist, Mark York he opens the show with a musical number. And he instantly belies his 79 years. From the stalls, the naughty glint in his eyes is visible. He looks like mischievous fellow who would probably be a hoot to go for a drink with.

Jim Smith was born to be a performer. I don’t want to give too much away but at his first job in a factory he looked out of a window and the view was a brick wall. He downed tools and walked out because there had to be more to life than looking at that brick wall.

So began a life of adventure. Through hard work, determination, bloody-mindedness and cheek he became a music hall star. He rose through the ranks. From a two-minute act to topping the bill. Even as a ballet dancer! The story about him dancing a Pas de deux on his own, albeit with an imaginary partner Ruth is worth the ticket price alone!

What is most striking about Jim Dale (the name was changed but that story is in the show) is his sheer humility. At times, he almost seems apologetic for the amazing life he is leading. Of course, to recount some tales he has to mention some other well-known and well-loved characters. However, he does not have to use other people to make his reminiscences fascinating. He is the star.

Listening to this fine raconteur is like a master class for any other actor too. Not just the way he performs or speaks but his general demeanour is something that many people could learn from. There are few people so accomplished who appear so dignified.

He is, of course Jim Dale M.B.E although Mr Jones and I want to start the campaign to get him knighted. Sir Jim Dale would be the best 80th birthday present, wouldn’t it?

Talking of Mr Jones, he wondered if there was a portrait of Jim somewhere that was ageing terribly because the real man seems to be doing just fine! He is a beacon of hope for everyone (especially those of us who suffer from Peter Pan syndrome!)

So, from music hall to Harry Potter. Georgy Girl to Barnum. Noel Coward to Shakespeare. It’s all here. The personal history of a captivating star who, over the years has entertained us all. From helping the sixties to swing, he is still creating a current fan base with his Harry Potter work. There are no signs of him stopping any time soon. You will leave the theatre with a smile on your face.

Jim Dale is one of the world’s great stage entertainers: singer, dancer, comedian, Shakespearean actor, raconteur. In Just Jim Dale, Jim takes audiences on a journey through an unequalled career in the theatre with a myriad of irresistible showbiz tales, songs and performances – a career extending from performing as the youngest professional comedian on the British Music Hall stage, to joining the National Theatre at the request of Sir Laurence Olivier, starring in 11 Carry On films, his Broadway triumphs in Scapino, Barnum and Me and My Girl, and then his uproarious experiences narrating all seven Harry Potter audiobooks for the US market.

Like most people, I think, I often have mixed feelings about a show I see. Occasionally, though it is rare, there will be a production where … END_OF_DOCUMENT_TOKEN_TO_BE_REPLACED

“The times they are a-changin'”, as Bob Dylan put it - and as a deceased woman’s grandson (Phillip Jones) returns home to attend the funeral, the … END_OF_DOCUMENT_TOKEN_TO_BE_REPLACED

It’s not often that the entertainment tastes of an intellectually snobby middle-aged woman and an action-mad 10-year-old boy align perfectly, but … END_OF_DOCUMENT_TOKEN_TO_BE_REPLACED

Notre Dame is the latest digital production by Threedumb Theatre, live-streamed from The Space in Canary Wharf, London and directed by Stephen Smith, … END_OF_DOCUMENT_TOKEN_TO_BE_REPLACED