Home » Reviews » Killing Time ‘is a most delightful and impressive production’ 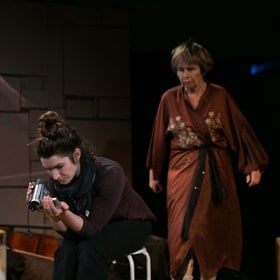 “Yes!” There’s a way of answering the phone abruptly to someone familiar, someone who the person who picks up the receiver loves to hate, or at least likes to dislike. In Killing Time, a rather unappealing name for a show at face value, Hester Brook (Brigit Forsyth) is, for reasons not made immediately clear, nearing the end, having forged an illustrious career with a more than one prestigious and well-travelled orchestra as a cellist. One or two matters are left unresolved regarding how she ended up in the circumstances in which she finds herself – the social services have some involvement, and only some, not leaving her entirely alone, despite her express and repeated wishes to be left to get on with whatever life she has left. She doesn’t seem to have any outpatient or GP appointments regarding her condition, though it is possible that she simply pays no attention to them.

She still lets Sara (Zoe Mills), an “assistant social worker” in, however. Hester’s ambivalence to being helped is totally understandable: why do household chores if there’s state-sponsored help available? Like many a good play, where details have been paid attention to, the script shines. Hester is revealed to be far from a doddery and muddled person of pensionable age – she understands Skype and uses it with more proficiency than yours truly, and mobile telephony, digital television and recording devices are used with equal ease. This is true of many older people, of course, but it is unusual to see such a non-patronising and well-considered portrayal of an old spinster. There’s humour in the play, but it’s not from the traditional ‘old-therefore- stupid’ school of thought. It’s from a mind that remains sharp to the end.

Some excellent use of projections allows George (Robin Herford) to be more than an off-stage character, even if technically that’s what he is. The images displayed at the relevant points during the play helped to underline the action and dialogue, but the acting was of such a high standard that most if not all were ultimately unnecessary. At least they never proved distracting. What was a little odd was a revolving stage, which didn’t achieve much, mostly because the stage seldom moved around, and when it did, it never revealed anything that wasn’t already there.

It was almost inevitable that the second half would take a more serious tone, given how punchline-laced the first half was. But for a while after the interval, the comedy levels rose. Sara continues to visit, often discussing her own station in life. Perhaps this isn’t the most feasible thing a social worker would talk about when visiting a client, but I’ll forgive it here, as it makes for good character development.

While a lot of topics are covered in this play, it doesn’t feel like the kitchen sink has been thrown at it. Hester’s forthrightness is refreshing, keeping what is, essentially, a slow-moving narrative somewhat intriguing. I prefer the comedy value here, whether I liked the style of humour (more often than not, I did), over the possible melodrama this show might have been. There is, in the (ahem) dying moments of the play, some semblance of sentimentality, but after all that laughter, a pinch of poignancy was most welcome.

Hester bemoans the treatment of women after her own obituary is prematurely published, as her musical career is largely ignored in favour of details about a relationship decades ago: “It doesn’t matter what you’ve done! It’s who you’ve f– -ed that counts!” How very true – not fair, not right, but true. And it has often been said in recent years that there aren’t very many roles for older women to play – well, here’s one from Wordmills Productions, including an actor-as-musician part. A little tightening is required to make a good script a great one, but all in all, this is a most delightful and impressive production.

Hester is determined to live her last days to the full. Even if it kills her…

Inspired by an original cello composition by Brigit Forsyth, which she will play live among a feast of cello classics, the pair star in this hilarious and irreverent brand new comedy. Written by her daughter Zoe Mills, Killing Time explores inspiration, music, life and the right to die.

With an ingenious mix of live cello, digital film and soundscape, Killing Time moves, amuses and provokes fresh thought on the most searching question we all may face: if you could leave the world your very last words… what would you say?

Brigit Forsyth has extensive television and stage credits including the BBC sitcom Whatever Happened to the Likely Lads and is currently appearing in Still Open all Hours.

The background stays largely the same throughout the performance, and appears to resemble the hairstyle of Elle Woods (Courtney Bowman). Regardless, … END_OF_DOCUMENT_TOKEN_TO_BE_REPLACED

Everyman is one of the earliest printed plays, originally written in Middle English and first performed around 1510. It is a morality play, popular … END_OF_DOCUMENT_TOKEN_TO_BE_REPLACED

After being closed for over two years due to covid, the Arcola Theatre has re-opened with Barney Norris’s love song to the people who raised him, We … END_OF_DOCUMENT_TOKEN_TO_BE_REPLACED

Now in its 15th year, La Clique have firmly established their place on the world burlesque circuit and this year’s London cast bring their infamous … END_OF_DOCUMENT_TOKEN_TO_BE_REPLACED