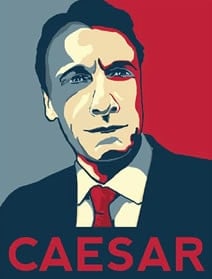 Don’t be late for this production, because there is a lot going on before it really starts. A television screen beams news bulletins of current affairs: war in Egypt, rebels in Spain defeated, Barbarian Gauls, Rome’s triumph. Political activists roam through the audience, whipping up support for Caesar, encouraging applause, distributing placards to hold up and organising Mexican waves. All of this activity is monitored by menacing-looking secret service officers. To be in the audience for this production is to be very much part of the proceedings; the action takes place on two stages, to the left and right of the audience, and also at ground level in what would be the aisle section of the church. The actors enter from many different directions and often speak to the audience as they enter the auditorium, as a politician might work the crowd at a rally.

Gemma Fairlie, the director, has worked on productions of Julius Caesar a number of times with the Royal Shakespeare Company and now, in this Guildford Shakespeare Company (GSC) production, presents it as a contemporary political thriller. The play has 53 speaking parts, which are delivered by a wonderful cast of only 10 actors. The roles in Julius Caesar are normally dominated by men but, in this production, half the roles are played by women, including that of Brutus, portrayed strikingly by Johanne Murdock. The modern setting of the play seems to be very apposite, given the recent world events.

The play proper begins as Caesar returns triumphant after defeating the Gauls and his rival Pompey. A lone demonstrator is restrained and removed; “spontaneous” applause breaks out as Caesar and his wife appear. A mad bag lady, a delightful cameo from Sarah Gobran, warns Caesar to beware the Ides of March but he ignores her and the party atmosphere resumes. Despite being warned against going to the forum that day, Caesar ignores the advice and is murdered by the conspirators, including Brutus, led by Cassius (Chris Porter).

Noel White and Jessica Guise are very convincing as the charismatic Caesar and his beautiful supportive wife, Calpurnia. Johanne Murdoch plays Brutus as a modern powerful female politician and this interpretation never once feels out of place. Jack Wharrier is inspiring and passionate as Mark Anthony, and he has the good fortune to be able to deliver some of Shakespeare’s most famous and inspiring lines. He keeps the peace with Brutus and Cassius and then gives a speech at Caesar’s funeral where he is careful not to praise Caesar or criticise Brutus but cleverly makes it clear to the crowd that they should support Caesar. The conspirators flee the city and mob rule takes over.

The shorter second half of the play is set in a Rome torn apart by civil war. Mark Anthony has joined forces with Caesar’s heir Octavius in a battle to defeat Brutus and Cassius. Seeing that their cause is lost they both take their own lives. Much of this fighting is played out as modern dance. My companion wasn’t too keen on this, but I loved it; I enjoyed this production and I have yet to see a poor performance by the GSC. I highly recommend that you should go!

Caesar has returned to Rome: an icon bathed in glory. The people adore him…but what happens when one man holds too much power?

Focusing on the cult of personality, a government founded on propaganda and the most famous case of backstabbing in politics, Shakespeare’s compellingly tense thriller still has relevance today.

JULIUS CAESAR is directed by GEMMA FAIRLIE (Royal Shakespeare Company; New Vic, Stoke): “This is a Caesar of suits and PR campaigns, of violence and fear, caught in a high octane whirl of sound bites and camera flashes. As rumours fly and governments implode the story of Caesar will explode through Holy Trinity Church in a site specific contemporary version that uses this iconic backdrop of religious and political significance to explore this timely thriller.”

Matt Pinches Co-Founder: “JULIUS CAESAR is Shakespeare’s great political thriller, and given the political shifts in governments all over the world in 2016, we felt that if ever there was a play for our times, this was it. Even though it was written over 400 years ago, CAESAR contains echoes of the political world we live in today. It’s easy to see parallels with the recent US Presidential election, Brexit, Syria, and European migration issues, as well as the obvious connotations of party delegates wanting to oust their leader. Our setting may be modern, but Shakespeare’s words and their intentions are timeless.”

Our setting may be modern, but Shakespeare’s words and their intentions are timeless.

NB There is some flashing lights, theatrical haze, small pyrotechnics and sounds (recorded) of gunshots during the performance. Replica Firearms are also in use during this performance.

This isn’t the first production to go down the road of referencing a one-star review of their show (from a different publication, I hasten to add). … END_OF_DOCUMENT_TOKEN_TO_BE_REPLACED

Two sisters reunite after the death of their mother, and secrets pour forth. Robert Holman’s new play gently exhibits talented classical acting in a … END_OF_DOCUMENT_TOKEN_TO_BE_REPLACED

Everyone’s vexed in this show, though some have clearer reasons to be than others. Mrs Driscoll (Tameka Mortimer) is struggling with a home life that … END_OF_DOCUMENT_TOKEN_TO_BE_REPLACED

The penultimate production of the 2021 Tête à Tête Opera Festival, based at London’s Cockpit Theatre and showcasing contemporary and avant-garde new … END_OF_DOCUMENT_TOKEN_TO_BE_REPLACED

Relatively Speaking premiered in 1967 and is the sort of show that is, by contemporary standards, very much of its time, and not just because of … END_OF_DOCUMENT_TOKEN_TO_BE_REPLACED