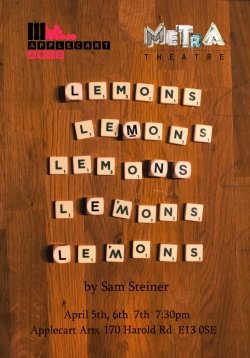 Two people in a world where communication is a limited resource. Trying to find the right words when you only have so many. How would that affect your life, your voice, your relationships? That’s the world we find ourselves in with Lemons Lemons Lemons Lemons Lemons at Applecart Arts in East London.

The theatre is a small space like a gym hall in a school, with a sparse staging of black blocks and a monitor that repeatedly shows countdowns from 140. If you’re a heavy internet user, you’d be forgiven an assumption that this was somehow a reference to the old limitation on tweets to 140 characters, but you’re only half right.

To begin with, the story reads a bit like your standard boy (André Larnyoh) meets girl (Helena Whitfield) at a pet cemetery for a service for a cat named Dennis, they fall in love, they have their problems, and you think you know what you’re watching. Sure, there are these odd moments here and there where the two characters say a number each that makes no sense to the audience, but which clearly has a deep meaning to them.

So what are the numbers? The play cuts around in time from the time before the numbers mattered and after they became everything, which is the point where the government passes the law that restricts every person to 140 words a day to spend, no more. But when the penny drops to us in the audience, the two different modes of conversation becomes crystal clear, and you know which side of the law passing we are at any given time. It’s devastating.

I was very tempted to write a 140-word review to fit with the theme of the play, but thankfully I am not under such horrid restrictions. The play’s ending is frustrating and I have so many questions about this world and how this restriction would be enforced, but at the end of the day that’s not the point, the point is about how little we sometimes say when we have all the words available to us, especially as these days we are overwhelmed with words to a point where the noise of it all can feel suffocating, and taking a step back into a silence when the world is screaming loudly can be an act of rebellion in itself. Words matter.

The production suffers slightly from tech issues, for example, there are instances where Larnyoh is standing on top of the tallest block and his face isn’t lit, but that is the nature of the game in these small spaces, there is limited time for tech and tweaks. Speaking of Larnyoh, his diction was a bit unclear at the start of the play but he recovered well and was especially engaging when the character was planning protests and getting riled up. There’s a sparkle in him that is very compelling. Helena Whitfield is clear and believable throughout, a solid and grounded performance of a character who tries to hold everything in, but has bursts of pure emotion that are exhilarating.

It’s a gem of a play, well executed by the two actors and director Tanya Roberts, with great music and soundscape fitting for this odd, but familiar world. It is a shame it’s only on for three days, I would love to revisit after a few weeks when it’d settled more in the space.

Oliver can’t imagine Bernadette being called anything else, but Bernadette doesn’t think she can be summed up in one word. Bernadette really loves Oliver’s music, but Oliver hates qualifiers. And Dan… well, he’s great at talking about cats.
Thrust into a world where speech is limited, the poignancy, power, and particularisation of language are revealed, as this couple asks themselves if they will ever truly know each other the way they did before.

It is 2002 – another Royal Jubilee year, and HRH (Mary Roscoe) is due to open a new Science wing in a 'sink' comprehensive where Dr Derek Jones … END_OF_DOCUMENT_TOKEN_TO_BE_REPLACED

Dr Anna LaRosa (Dr Stefania Licari) has a lot to say. Just as well, as she’s the only one on stage in this medical comedy, which largely draws its … END_OF_DOCUMENT_TOKEN_TO_BE_REPLACED

Nikhil Parmar’s one-man show, originally written as a TV pilot, manages to touch on a wide range of themes from Islamophobia to modern fatherhood with … END_OF_DOCUMENT_TOKEN_TO_BE_REPLACED

Handel’s 1738 opera Serse (or Xerxes) is an exploration of power, love and human frailty. King Serse falls in love with the voice of his brother … END_OF_DOCUMENT_TOKEN_TO_BE_REPLACED

Lea Salonga has her fans. She also has some superfans, the ones who yell, “I love you Lea!” at almost every opportunity. If that wasn’t enough, there … END_OF_DOCUMENT_TOKEN_TO_BE_REPLACED