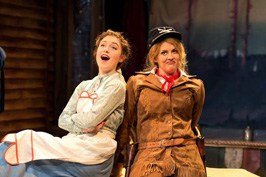 Calamity Jane is one of the most famous and well-loved movie musicals of all time. As with many successful films, it has been made into a stage show. Calamity Jane has been staged many different times since 1979 with a variety of female performers in the title role. This new stage version of the classic is a Watermill Theatre Company production, directed by Nikolai Foster.

Jodie Prenger in the title role is an absolute whip-cracker! The role was made famous by the legendary Doris Day in the 1953 Warner Brothers classic, an iconic role and totally synonymous with movie musicals. Prenger has given this feisty, horse riding, gun shooting tomboy a unique makeover and delivers a powerful punch of a performance. The highlight of Prenger’s performance is her originality, this is the reason her performance is so entertaining. Thankfully, Prenger has not created a pastiche of Doris Day’s memorable character, which would have been an obvious choice. There are similarities between the two but they are welcome similarities that are unavoidable. Prenger’s voice is a force that cannot be ignored, her power and range demand attention and fill the stage but her connection to each of the songs is what stands out. The song that seemed to promote the biggest reaction from the audience was ‘Secret Love’, from the moment the music started to the last note sung by Prenger, the audience were completely transfixed by her performance of this iconic song. 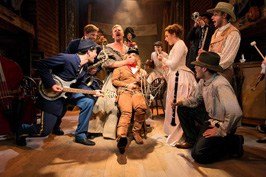 Tom Lister in the role of Wild Bill Hickok, played by Howard Keel in the film, is totally charming and very entertaining. The biggest surprise of Lister’s performance is his beautiful singing voice. Lister is known mostly for playing Carl King in Emmerdale, over the years many soap actors have performed in high profile musicals, Lister has most definitely made the right choice here. Lister has a really strong presence on the stage and works in perfect unison with Prenger. The pair have created a highly entertaining partnership, whether they are fighting or kissing, they are a pleasure to watch. In the show, Lister sings a song that has been written specifically for the stage version. ‘Careless with the Truth’ is a really catchy and fun song that fits Wild Bill Hickok splendidly and is executed by Lister perfectly. Watch out for Lister’s lasso skills.

The ensemble is like a well-oiled machine of multi-talented performers. The ensemble is the life force of the show, they never seem to be off stage. If they are not singing they are dancing or playing a musical instrument or two. The energy and passion the entire cast have as a collective make the show more of an experience than just a stage show.

The entire show takes place in The Golden Garter, for those of you familiar with the film will know what that is. The scene changes are achieved in a highly imaginative, creative yet simple way. Very much like the spectacular dance routines, the scene changes are a choreographed piece of stand-alone entertainment.

This new production of Calamity Jane is the perfect choice for a night out at the theatre. It has all the charm of the film plus the excitement and exhilaration of live theatre and performance. Please do not expect to watch an exact copy of the film or you will be disappointed. Do not worry though, the story is the same and all your favourite songs are featured. Calamity Jane is currently playing at the New Wimbledon Theatre as part of a UK tour. Book your tickets now for an evening of pure entertainment.

CALAMITY JANE
Following numerous highly acclaimed productions that include Sweeney Todd and Sunset Boulevard, The Watermill Theatre returns with a new production of the classic musical Calamity Jane. Starring Jodie Prenger (Oliver!, Spamalot and One Man Two Guvnors) alongside a cast of multi-talented actor/musicians, this brand new production gets to the heart and soul of the musical.

Calamity Jane can outrun and outshoot any man in Deadwood. Hard, boastful and desperate to impress, she travels to Chicago on the Deadwood Stage to recruit a star, Adelaide Adams. But things don’t go too smoothly for Calamity, as everyone in town favours the new girl and she struggles to keep her jealousy and pride in check. It takes her long standing enemy Wild Bill Hickok to make her see sense, and realise her Secret Love…

With an Oscar nominated score that includes The Black Hills of Dakota, The Deadwood Stage (Whip-Crack-Away), Just Blew in from the Windy City and the Award winning song Secret Love, don’t miss this new production which blows into your city for one week only.

Jodie Prenger is probably best known for winning the role of ‘Nancy’ in Cameron Mackintosh’s West End production of Oliver! through the BBC television series I’d Do Anything. During her run in the show at the Theatre Royal Drury Lane she received both critical and public acclaim for her portrayal of the role. Since then she has starred in the National Theatre’s hit production of One Man, Two Guvnors both in the West End and on tour and as ‘Lady of the Lake’ in Spamalot. Jodie is also a regular presenter on BBC Radio 2.

Tom Lister most recently played Grimes and Eel in the world premiere of Water Babies at Leicester Curve. He is probably best known to TV audiences for his role as ‘Carl King’ in ITV’s Emmerdale, a part he played for nine years. His theatre credits also include ‘Pan’ in Loves Mistress at the Globe Theatre and ‘Ralph’ in Accrington Pals at the West Yorkshire Playhouse.

Alex Hammond made his professional debut in the hugely successful “Taboo” at the Brixton Academy. He most recently played the role of ‘Adam Pontipee’ in the national tour of Seven Brides for Seven Brothers. His other theatre credits include Save The Last Dance For Me.

Phoebe Street most recently appeared in The Light Princess at the National Theatre. Her other credits include Les Misérables at the Queen’s Theatre where she made her West End debut.

I wouldn’t exactly say Ben Forster appearing as himself in this musical comedy is a career highlight (he is, after all, someone who has played the … END_OF_DOCUMENT_TOKEN_TO_BE_REPLACED

It’s an intricate plot, laced with some subversive humour - that the female character is simply called ‘The Woman’ (Molly Lynch), for instance, is … END_OF_DOCUMENT_TOKEN_TO_BE_REPLACED

Andrea McArdle didn’t, when the 1978 movie Rainbow was released, look or sound like Judy Garland, and she still doesn’t. You’d be forgiven for … END_OF_DOCUMENT_TOKEN_TO_BE_REPLACED

TENNIS ELBOW is the first play that John Byrne has written for thirteen years, and is in fact a companion piece to his critically successful Writer’s … END_OF_DOCUMENT_TOKEN_TO_BE_REPLACED

It’s all a bit banal, really - or perhaps I’m too heavily influenced by some of the other online productions that I’ve seen recently, which deal with … END_OF_DOCUMENT_TOKEN_TO_BE_REPLACED