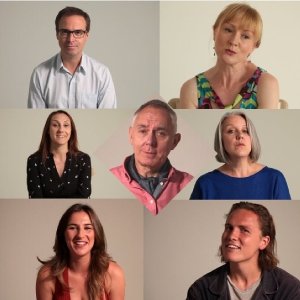 There’s a certain level of frustration that many people have felt in lockdown, and if it’s escapism you’re after in an online theatre production, it’s to be found elsewhere. Love Screens is almost brutally honest in its portrayals of human interaction. It does so partly by using a common (or, if you please, repetitive) technique: each of the seven characters across the three short plays speaks directly to the camera, such that audience members are absorbing information and knowledge that is not necessarily disclosed to other characters. The viewer is, in a nutshell, considered a ‘safe space’ where all sorts of candid viewpoints and opinions on partners, friends and acquaintances can be offloaded.

The trilogy starts with Besties, a monologue in which Claudia (Sophie Morris-Sheppard) would have had an online meeting with, well, her ‘besties’, if it were not for a meeting time change which she wasn’t informed about. If you’re anything like me, this itself immediately calls to question whether this really is a group of best friends: if she was missing from the Zoom meeting, why didn’t one of them send a text message? But as there’s only Claudia’s perspective to go on, one can only assume they are as close as she says they are. Either way, the devil is in the detail, as she talks about who is better suited to be housemates with whom. And then there’s her reasoning for finding herself alone despite considering herself to be ‘popular’. Her bullish confidence at the start is practically a gloopy mess by the end, which perhaps paradoxically elicits a degree of sympathy for a character on what seems to be a downward trajectory.

In The Trees of Nature, Simon (Calum Wragg-Smith) and Daisy (Isabella Inchbald) recall in vivid detail what was, at the risk of giving too much away, a non-relationship: they were good friends, and were attracted to each other, with more than enough commonalities between them to sustain a long conversation in the pub. In very broad terms, it’s a little like Once The Musical: these two were, at one point, close as close could be, but in the end, they were never going to enter a relationship and move in together.

It dawned on your reviewer when this section of the play started that the backdrops and costumes here aren’t much to write home about – this is a production that instead relies quite heavily on the script to deliver. It’s also heavy on exposition – there are no flashback scenes that intersperse the storytelling, for instance. There’s a reliance, therefore, on the characters’ recollection of what transpired some time ago. This isn’t a problem here, where Simon and Daisy’s separate versions of events are very much in agreement, but in the third part of the show, Four Sides of a Triangle, recollections differ, sometimes substantially, resulting in some awkwardness and tension.

Awkwardness and tension, of course, make for good drama, and if much of the production plods along at a steady pace (which it does, because two of the three plays are being told in retrospect, long after the heightened emotions in the heat of the moment have dissipated), patience is a virtue rewarded. Jeremy (Stephen Omer) makes interventions in the lives of Adam (Alexander Jones) and Kate (Sarah Lawrie) that become more of a harm than a help, and there’s something inherently British in Adam and Kate, as well as Kate’s friend Sarah (Samantha Parry) maintaining a stiff upper lip even when saying something would have been beneficial.

A scene or two with some interaction between characters wouldn’t have gone amiss: on the other hand, top marks to this production for observing social distancing rules. There’s a lot to think about here, and much to take away from, particularly with regards to how people’s actions and behaviours, however well intended, come across to others.

Love Screens: Three short plays exploring those moments that may alter the course of love and life. Broken moments in which to remember, reflect and reassess. To think about what is, what was and what might have been.

Join us from the comfort of your own home as we stream Love Screens, three short plays written by Nicolas Ridley and directed by Anthony Shrubsall on Friday 11 September at 7.30pm.

The plays are followed by a live discussion with Nicolas, Anthony and you, the audience.
https://openealing.com/love-screens/

I wouldn’t exactly say Ben Forster appearing as himself in this musical comedy is a career highlight (he is, after all, someone who has played the … END_OF_DOCUMENT_TOKEN_TO_BE_REPLACED

It’s an intricate plot, laced with some subversive humour - that the female character is simply called ‘The Woman’ (Molly Lynch), for instance, is … END_OF_DOCUMENT_TOKEN_TO_BE_REPLACED

Andrea McArdle didn’t, when the 1978 movie Rainbow was released, look or sound like Judy Garland, and she still doesn’t. You’d be forgiven for … END_OF_DOCUMENT_TOKEN_TO_BE_REPLACED

TENNIS ELBOW is the first play that John Byrne has written for thirteen years, and is in fact a companion piece to his critically successful Writer’s … END_OF_DOCUMENT_TOKEN_TO_BE_REPLACED

It’s all a bit banal, really - or perhaps I’m too heavily influenced by some of the other online productions that I’ve seen recently, which deal with … END_OF_DOCUMENT_TOKEN_TO_BE_REPLACED