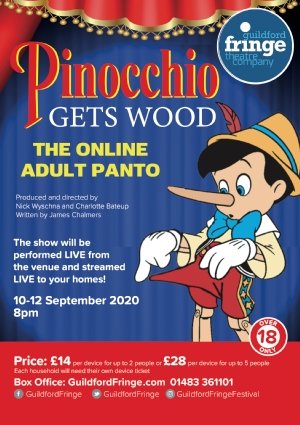 Christmas comes earlier every year. It feels that no sooner do the Easter Eggs finish than the ‘back to school’ stuff comes out, and then, at the start of September, supermarket shelves start to groan under the weight of heralds of mince pies, tinsel and all the traditional trappings of the festive season down the aisles. However, some things about the Christmas period have, for me at least, always stayed in December. And pantomime is one of them. However, given how mixed up the whole of 2020 has been, it will come as no surprise that I was asked to review an online pantomime in early September. So, I grabbed a glass of coke, fired up the laptop and settled down to watch Pinocchio Gets Wood.

The show itself is a very adult take on the traditional old story. In the town of Wiley Cyrus, sex shop proprietor Dame Ciabatta M’Flange (Daniel Page) is worried as her daughter Juliate (Rachel Warrick-Clark) is rather uptight. Ciabatta believes that her daughter would learn to relax more if she were to, how shall I put this, have an experience that would help her understand what it means to be a woman. However, there is a problem. Not only is Juliate against the whole idea unless she can find the right man, but the only man that seems interested in her is the Master of Puppets Strong Boner (Andrew Franklin). Unfortunately, as well as being rather unsuitable, due to being the main villain in the town – complete with hideous sidekick Herpes – Strong Boner also fails to measure up in other ways. At the end of her wits, Ciabatta decides to make Juliate a special wooden toy of her own. As she fashions the implement, Ciabatta wishes it were a real boy that would look after Juliate’s needs. That night, the Blue Fairy takes the wooden object and brings it to life as a wooden boy by the name of Pinocchio (Tamsin Lynes). Will the magic boy with the ever-growing appendage answer Ciabatta’s prayers and give Juliate the experience she so desperately needs?

Before the show itself, the Guildford Fringe Theatre Company sent out a questionnaire to everyone attending the performance. Whilst this was unusual, it was a really nice touch and meant on the night, they were able to personalise the show – with some very interesting rhymes – and also get some audience participation, which is one of the areas that all pantomimes have to have.

I was not too sure what to expect as I opened Google – other browsers are available. This was the first online show I have seen that has been live and was in a real theatre. While zoom screens can work for many types of show, they are not appropriate for panto. The voiceover finished, the lights came up, the music started, and I found myself laughing out loud during the first line of the opening number- songs by Nick Wyschna and Charlotte Bateup (who also did the choreography). James Chalmers’ writing is spot on and there are some great moments in the script – the ‘Trump speech’ and the entire schoolroom scene, in particular, are masterpieces of the comedic written word.

Unfortunately, I cannot tell you too much about my favourite points. First, because there is a no spoilers policy and second, because they are way too rude for publication in anything my mum might read. However, my friends will very soon be hearing my favourite joke from the night as I am still chuckling, thinking about it now.

So, the writing and songs are great, but it takes more than this to make a great show. The cast are spot on in bringing the words to life. It must be very difficult to perform a show like this under the current conditions. Stage performers feed off an audience, and never more so than in pantomime. So, to perform in an empty room basically to a camera, must be difficult enough but to have the energy and sheer joie-de-vivre required for pantomime with no direct feedback must be absolute agony. But these four extremely talented actors really pulled it off; then put it back on and pulled it off again (sorry, couldn’t resist). The performances were all first-rate and of the standard I would hope to have seen had I been sat in the auditorium instead of being at a desk in my bedroom, headphones on, boisterously laughing at the performance in front of me. Full credit to Director Nick Wyschna for getting the action moving and keeping the cast safe. Although they were keeping their distance from each other – in the prescribed way – it did not look odd or out of place.

And that’s it. My first – and possibly only – panto of the year, and it was an absolute blast. Pinocchio Gets Wood has all the elements that you would want from an adult panto. It is loud, boisterous, very rude and very funny, but never offensive. The writing is superb, and the cast give everything they have got to make the audience at home forget viruses, dodgy politicians and just revel in having no worries, enjoying themselves and being big kids once more.

I wouldn’t exactly say Ben Forster appearing as himself in this musical comedy is a career highlight (he is, after all, someone who has played the … END_OF_DOCUMENT_TOKEN_TO_BE_REPLACED

It’s an intricate plot, laced with some subversive humour - that the female character is simply called ‘The Woman’ (Molly Lynch), for instance, is … END_OF_DOCUMENT_TOKEN_TO_BE_REPLACED

Andrea McArdle didn’t, when the 1978 movie Rainbow was released, look or sound like Judy Garland, and she still doesn’t. You’d be forgiven for … END_OF_DOCUMENT_TOKEN_TO_BE_REPLACED

TENNIS ELBOW is the first play that John Byrne has written for thirteen years, and is in fact a companion piece to his critically successful Writer’s … END_OF_DOCUMENT_TOKEN_TO_BE_REPLACED

It’s all a bit banal, really - or perhaps I’m too heavily influenced by some of the other online productions that I’ve seen recently, which deal with … END_OF_DOCUMENT_TOKEN_TO_BE_REPLACED