I was, and still am, greatly intrigued by Louise (Heather O’Sullivan) and the themes of control, I saw throughout Lowkey Dying. The play, written and performed by Heather O’Sullivan, is a one-woman show where I was introduced to Louise. A woman who receives her sense of validation from various apps and ‘self-help’ rituals. And any fulfillment she finds from her dental surgery job is sourced through color coding and scheduling time-sensitive appointments. 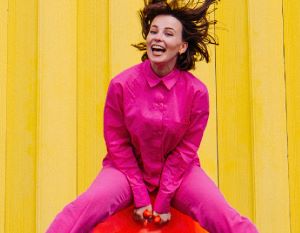 Louise has many relatable aspects. Her need for routine and predictability seems to represent a present phenomenon in the post-covid digital age. Internet buzzwords like ‘grind culture’, ‘clean girl’, and ‘maladaptive daydreaming’ come to mind when thinking of the life Louise leads. She tries to fit all aspects of her life into boxes that can easily be organized and put away. Similar lifestyles are displayed and absorbed frequently throughout various social media platforms.

The intriguing and relevant plot was complemented by O’Sullivan’s on-point performance which showed true talent and dedication to the role. I was drawn in by her use of movement. As well as her ability to sharply switch between settings and time to give us a very well-rounded and in-depth look at Louise. The direction of Lauren O’Leary was strong, and this was shown by the achieved clarity in a format where it could have easily been lacking. With one
set and one actress, every scene transitioned smoothly. This was aided by high-frequency sound played and lighting changes.

At the beginning of the play, I was easily entranced by great acting, and a bright pink set, but this initial feeling shifted. After the main conflict arose, I felt pulled through the show quickly and rushed toward the end. It was like Louise realized she had to run and quickly finished telling me what happened. Louise’s holy routine is at risk for destruction and then she must find her passion. Her reaction and execution for finding said passion were funny and realistic but what was shown was just not enough. I left unsatisfied and yearned for a resolution to Louise’s story.

Lowkey Dying is a great social reflection that I found relatable and intellectually stimulating. Unfortunately, it was rushed at times and that did hinder my enjoyment. But O’Sullivan’s ability to provoke laughter and societal reflection is impressive. And it was encouraging to see a unique portrayal, and critique, of our relationship with productivity.

Louise measures her water consumption on an app. She tracks her calories on an app too. Her life functions perfectly. She even has an app that tells her when to stretch her legs.

Examining the relationship between the internet, the self and our inevitable social media overdose, Lowkey Dying explores loneliness, productivity and expensive skincare.

The more personal information housed in Louise’s smartphone, the easier it becomes to pack her identity in there too. But at what cost? What do you do in the real world if all your personhood is online? Probably nothing. You’re just, lowkey, dying.

Like most people, I think, I often have mixed feelings about a show I see. Occasionally, though it is rare, there will be a production where … END_OF_DOCUMENT_TOKEN_TO_BE_REPLACED

“The times they are a-changin'”, as Bob Dylan put it - and as a deceased woman’s grandson (Phillip Jones) returns home to attend the funeral, the … END_OF_DOCUMENT_TOKEN_TO_BE_REPLACED

It’s not often that the entertainment tastes of an intellectually snobby middle-aged woman and an action-mad 10-year-old boy align perfectly, but … END_OF_DOCUMENT_TOKEN_TO_BE_REPLACED

Notre Dame is the latest digital production by Threedumb Theatre, live-streamed from The Space in Canary Wharf, London and directed by Stephen Smith, … END_OF_DOCUMENT_TOKEN_TO_BE_REPLACED