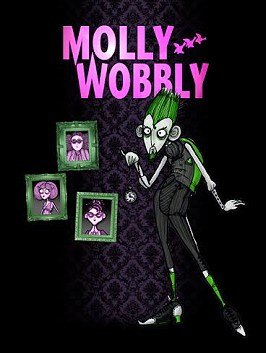 Imagine, if you can that Tim Burton got hold of The Little Shop of Horrors, a few Carry On movies and The Rocky Horror Show and took all the best bits of them then you have some idea of what you get with Molly Wobbly (Originally called Molly Wobbly’s Tit Factory).

The start of this rollercoaster ride places us in Romania where the villainous “Ithanku” is being chased by the villagers for committing a series of heinous acts and so he has to escape to a safer place. Through a clever mix of “B movie” cinematic visuals and live action we are quickly transported to England and the sleepy town of Little Happening.

This is where we meet the rest of the characters. Three somewhat mismatched couples who all run businesses on Mammary Lane. The hairdresser, the clock mender and the haberdasher. As the name suggests, Little Happening has very little happening and the frustration is beginning to show within the relationships of its inhabitants. That is until the arrival of a mysterious stranger who starts to shake up the town.

One by one, the women of the town are hypnotised by Ithanku, (who is masterfully played by Russell Morton with almost contortionist like skills.) and given a magic potion they all come to the realisation that their lives haven’t quite turned out how they expected and the dreams they had as young girls hadn’t quite come true. It would appear that the only way to make their lives better is to get a makeover and all get bigger bosoms, naturally (or not so naturally in this case!)

The men, who are all under the spell after drinking a bottle of wine laced with the aforementioned potion hatch a plan to find their missing women and kill them.

By now, dear reader you may have noticed that naturalism is not really the name of the game in this show but the modern day fairy tale is so beautifully executed that, as a viewer you are transported into the world of Little Happening so anything is believable. Even a singing and dancing nun!

The cast are magnificent. They manage to contain what should be a very large show into the minimal space of the lounge at the Leicester Square Theatre with aplomb. The musical numbers are inspired. Mostly comedic but with a smattering of heart wrenching ballads that will moisten the eye of many. The singing is impeccable and it is almost impossible to pick an outstanding member of the cast. Having said that though Cassie Compton is sublime.

I also fell slightly in love with another cast member but I won’t name names here, I’ll let them argue that one out in the dressing room as they’re reading this!

To summarise then, if you are offended by the reference to boobs, for there are many (using words that you may not even have heard of!) and the odd bit of swearing or if you are a staunch Catholic then you probably should give this a miss.

If you like a good night out with some camp, irreverent comedy, first class performance and songs that will be stuck in your head on the way home, then this is the show for you. It runs until March 14th and in my opinion, it should get a transfer to a larger theatre.

The women of Little Happening are desperate – all three are trapped in loveless marriages and stuck with failing businesses. There is only one person who can help them – a woman they’ve never met. Her name is Molly Wobbly …

Margaret, Ruth, and Jemma receive unexpected makeovers when a stranger arrives on Mammary Lane in the acclaimed musical comedy by Paul Boyd that was the talk of the 2012 Edinburgh Festival Fringe!

Molly Wobbly tells the saucy, sexy, outrageous story of Margaret, Ruth, and Jemma – three Little Happening shopkeepers who plot to get a few things off their chests. Bulging with big laughs, crammed with catchy songs, and chock-full of cheeky characters, Molly Wobbly is the hilarious musical comedy about a mysterious woman and her dream to make the world a more beautiful place.

Original Soundtrack available for just £5 when purchased at the same time as your ticket simply select “Ticket & CD” option when you book.

EverAfter, A mixed up fairy tale at the Chickenshed Theatre, is a great Christmas show. As the title suggests, this is a concoction of stories. The … END_OF_DOCUMENT_TOKEN_TO_BE_REPLACED

The thing about Panto is not to over-think it. It’s about having fun and surrendering to the Christmas spirit. Like Christmas crackers, there is a … END_OF_DOCUMENT_TOKEN_TO_BE_REPLACED

Anyone who's worked in investment banking knows it's largely an intellectually-free zone, polluted with people who calculate each other's value … END_OF_DOCUMENT_TOKEN_TO_BE_REPLACED

By the production’s own admission, the version of events as detailed in Bonny & Read is unlikely to equate to an exactly full and fair account of … END_OF_DOCUMENT_TOKEN_TO_BE_REPLACED