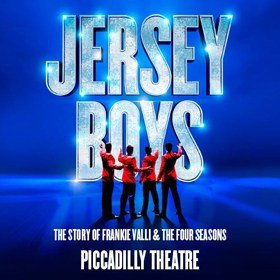 In the rich firmament of Juke Box Musicals Jersey Boys is surely the brightest star. The old cliché goes: if you remember the sixties you weren’t there. These days, all over the globe, we have radio shows devoted entirely to oldies, MTV and its ilk, wall-to-wall tribute acts and a burgeoning re-fascination with vinyl so it is entirely possible for anyone of whatever age to cut through the time-mists and hippy-fog to immediately recognise the two-and-a-half minute rights-of-passage tunes written by Bob Gaudio and made famous by the distinctive harmonies of Frankie Valli, Tommy DeVito and Nick Massi: The Four Seasons. Whilst DeVito was the founder of the band, Massi its cultured rhythmic pulse and Gaudio its muse, the star quality was provided by the frontman, the lead singer, Frankie Valli – The Voice.

And it is that voice, Frankie’s voice, that heart-string-tugging, plaintive falsetto that’s been the soundtrack to a million dates, a million romances, and, yes, a million broken hearts, that first grabs you, that engulfs you and which has had the ability to mesmerise music-lovers not just through the sixties but also the seventies and eighties and the nineties and beyond. In fact Frankie still does his own tribute act of himself and his mates all these years on at the age of 82.

So if Jersey Boys is going to work you need that voice, you need those heart-strings tugged, you need someone who IS Frankie, fifty odd years on. And in Matt Corner we are fortunate to have just that.

In the old days actors acted and singers sang: whilst actors who sung a bit struggled to hold a melody or reach a register above or below what they were used to, singers’ acting was invariably constructed out of wood. It has been the advent of the juke box musical over the last twenty-five years that has altered that dynamic forever. Now, if you want to get on, you have to be a complete performer: an actor and a singer and a dancer. Corner has a great voice and effortlessly nails all the high points of the Frankie Valli frequency range whilst completely capturing Valli’s distinctive personality flips from nervous ingenue to confident and consummate entertainer controlling the emotions of his audience. I’m lucky enough to have seen Frankie Valli live so I can testify to the accuracy of Corner’s performance: it’s in the eyes and the hair and the hand-gestures and the ability to captivate and entrance.

A neat device in the show is for each original member of the band to narrate one of the four sections (Spring, Summer, Autumn, Winter). We therefore have a more evenly balanced narrative than would have been the case if all focus had just been on Valli. Declan Egan as songwriter Bob Gaudio – the artistic driving force behind the band – accurately projects the self-assurance of someone who penned their first hit at the age of 15 (“Who Wears Short Shorts” by the Royal Teens) and his pleading for recognition of his “new kind of song” (“Can’t Take My Eyes Off You” *) is a particularly effective moment in the drama. Simon Bailey, as bad boy Tommy DeVito, gives us full-on, macho-mode Noo Joysey diction but also shows us glimpses of vulnerability behind his wannabe mobster bravado. And Matt Hunt as Nick Massi, the band’s resident grouch, who’s always threatening go off and start “his own band” and who eventually tires of the whole shebang and goes home, is dry and amusing and is unexpectedly explosive when he finally tells Tommy exactly what he thinks of him. In a principally male-centric show female characters, inevitably, don’t get much of a look-in but Nicola Brazil as Frankie’s long-suffering first wife, Mary Delgado, helps to anchor the musical hype in the gritty reality that exists back home whilst partners are on the road.

As well as great music a musical needs a strong book. Marshall Brickman (of Woody Allen collaborator fame) and Rick Elice mould the real-life story of these four boys from New Jersey into a pulsating rollercoaster of jaw-dropping events. There are the inevitable artistic struggles, the alcohol, the groupies, the staggering extent of Tommy’s mob debt, the tax liabilities, the schemes, the scams, the sweetheart deal excluding two members of the band, the bitchiness, the grind-you-down toll of life on the road, the relationships strained to breaking point and the drugs: the fatal overdose by Frankie’s daughter gives added pathos to already poignant songs.

With that catalogue of life-shaping events you don’t need to make anything up – it’s more a case of what to leave out. So there are compromises: Gaudio pleads for help from producer Bob Crewe with his “new kind of song” that no-one will record or promote. Crewe offers advice on how to showcase it which is a little strange as, according to the programme notes, Crew wrote the song with Gaudio. And perhaps inevitably Tommy DeVito, talking after the show’s opening on Broadway in 2005, entirely rejects his portrayal in Jersey Boys as a serial multi-towel soiling and sink-pissing oaf: but I suppose he would, wouldn’t he? Such rock-scene myths provide much humour in the show as when the band, having been repeatedly rejected by record labels, are told by one producer to “come back when you’re black”. It’s a reminder that concurrent with the rise of the Four Seasons Motown was making it’s timely and all-pervading entrance to the world of pop – as depicted currently around the corner at the Shaftesbury Theatre.

The production values are very high as you would expect with Lighting Designer Howell Binkley taking the plaudits for walking the tightrope between creating a modern feel to the show without losing the contemporaneous atmosphere of the early sixties pop scene. Klara Zieglerova’s set combines well with this and Michael Clark’s projection, whilst setting scenes and providing documentary backdrops, also excellently combines realtime footage of the band on stage inter-cut with newsreel clips of iconic moments from the famous Ed Sullivan show.

If you fancy Jersey Boys take your partner for his/her birthday, take your granny – she’ll remember the hits – and take the kids ’cos they’ll be rocking in the aisles by the end: the imperious Des McAnuff directs a truly wonderful show, one not to be missed.

*footnote: There have been many covers of “Can’t Take My Eyes Off You”. In the UK Andy Williams had a hit in 1968 whilst the most esoteric is probably the 1991 Pet Shop Boys cover-mash-up with U2’s “The Streets Have No Name”. On hearing it The Edge reportedly exclaimed: “What have I, what have I, what have I done to deserve this?”

They were just four ordinary guys from New Jersey, until they sang their very first note. They had a sound nobody had ever heard… and the radio just couldn’t get enough of.

But while their harmonies were perfect on stage, off stage it was a very different story — a story that has made them an international sensation all over again.

Jersey Boys the story of Frankie Valli & The Four Seasons.
Featuring the hits: December 1963 (Oh What A Night), Can’t Take My Eyes Off You, Sherry, Walk Like A Man, Bye Bye Baby, Big Girls Don’t Cry and many more.

Winner of 57 major awards worldwide, including the Olivier Award for Best New Musical.

It is 2002 – another Royal Jubilee year, and HRH (Mary Roscoe) is due to open a new Science wing in a 'sink' comprehensive where Dr Derek Jones … END_OF_DOCUMENT_TOKEN_TO_BE_REPLACED

Dr Anna LaRosa (Dr Stefania Licari) has a lot to say. Just as well, as she’s the only one on stage in this medical comedy, which largely draws its … END_OF_DOCUMENT_TOKEN_TO_BE_REPLACED

Nikhil Parmar’s one-man show, originally written as a TV pilot, manages to touch on a wide range of themes from Islamophobia to modern fatherhood with … END_OF_DOCUMENT_TOKEN_TO_BE_REPLACED

Handel’s 1738 opera Serse (or Xerxes) is an exploration of power, love and human frailty. King Serse falls in love with the voice of his brother … END_OF_DOCUMENT_TOKEN_TO_BE_REPLACED

Lea Salonga has her fans. She also has some superfans, the ones who yell, “I love you Lea!” at almost every opportunity. If that wasn’t enough, there … END_OF_DOCUMENT_TOKEN_TO_BE_REPLACED