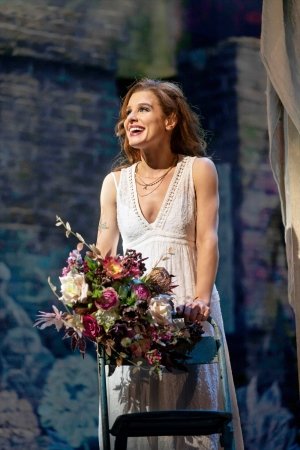 There’s already been a major musical reworking of Shakespeare’s Romeo and Juliet. It’s called West Side Story, which has been enjoyed by audiences through various revivals and tours over the decades since its 1957 Broadway opening. This one, & Juliet, truth be told, doesn’t beat West Side Story, but there is nonetheless much to be enjoyed in this rather thrilling night out at the theatre.

I would be lying if I said I didn’t recognise a few of the tunes used in this musical, with twenty-nine musical numbers either written or co-written by Max Martin, the Swedish singer, songwriter and record producer. In his capacity as songwriter, Martin is third to Sir Paul McCartney and John Lennon in having the most number one singles on the Billboard charts in the United States – the list of singers and groups who have sung his lyrics reads like a hall of fame of chart music, including Katy Perry, Taylor Swift, Ariana Grande, Britney Spears, the Backstreet Boys, Céline Dion and Justin Timberlake.

This makes a putting on show like this a big gamble – many in the audience will be familiar with the songs, and they will be familiar with the manner in which they are sung by top recording artists on the radio, or on CD, or on Spotify, or whatever their medium of choice is. Thus, for instance, hearing the Backstreet Boys’ 1999 hit, ‘Larger Than Life’, sung in British accents by a large musical theatre cast, takes some getting used to. At the lively and sprightly pace at which this production proceeds, however, there’s not much time to dwell on – well, anything, really. There’s a story to be told, and while Shakespeare (Oliver Tompsett) has finished writing Romeo and Juliet, its first performance hasn’t taken place yet, so there’s still time for his wife Anne (Cassidy Janson) to have her say: “Are you a strong enough man to write a stronger woman?”

Juliet (Miriam-Teak Lee) has an excellent stage presence and a powerhouse singing voice, at its best, I think, during ‘Roar’ (the title track from Katy Perry’s 2013 album of that name). May (Arun Blair-Mangat) goes through a coming of age of sorts (cue the Britney Spears song ‘I’m Not A Girl, Not Yet A Woman’), and Francois (Tim Mahendran) eventually comes to terms with his own identity – highly contemporary subplots for a highly contemporary musical. Juliet’s Nurse (Melanie La Barrie) hit it off with Lance (double Olivier winner David Bedella) – the amalgamation of ‘Teenage Dream’ and ‘Break Free’ was impressive and amusing in equal measure.

They even manage to get in a version of the Backstreet Boys number ‘Everybody’. The set (Soutra Gilmour) leaves little, if anything, to the imagination, which in some ways is quite refreshing – and some credit is also in order to video and projection designer Andrzej Goulding. There’s not much in the way of subtlety as David West Read’s book explores, amongst other things, female empowerment and non-binary gender. I couldn’t resist smiling at the cast’s rendering of ‘Since U Been Gone’, sung to Romeo (Jordan Luke Gage), boyish and more than a little vain as he is: “You had your chance, you blew it / Out of sight, out of mind”. Gage’s Romeo does, at least, possess exquisite comic timing.

The choreography (Jennifer Weber) is dynamic and borderline electrifying, particularly in the larger ensemble numbers. Outside all the singing and dancing, holes in the Shakespeare plotline are sharply and wonderfully observed and, more often than not, addressed. All things considered, it’s a gloriously fun and enthusiastic production. Or as one of the musical numbers rather colourfully puts it, it’s ‘F**kin’ Perfect’ – or, to quote the Bard himself, “If music be the food of love, play on”.

A timely and timeless tale of one independent young woman, & Juliet is a riotous comic blast of fun and glorious pop music that proves when it comes to love, there’s always life after Romeo…

Brought to life by an award-winning creative team in an explosive fusion of styles, & Juliet is directed by Luke Sheppard (In the Heights) with a book by David West Read (Schitt’s Creek), electrifying choreography from Jennifer Weber, stunning set design from Soutra Gilmour and costume design by Paloma Young.

Soaring with the music of Max Martin, the acclaimed songwriter of some of the biggest pop anthems of the last 30 years, & Juliet stars Miriam-Teak Lee as Juliet, Cassidy Janson as Anne Hathaway, Olivier Tompsett as William Shakespeare, Arun Blair-Mangat as May, David Badella as Lance, Melanie La Barrie as Nurse, Jordan Luke Gage as Romeo and Tim Mahendran as Francois.