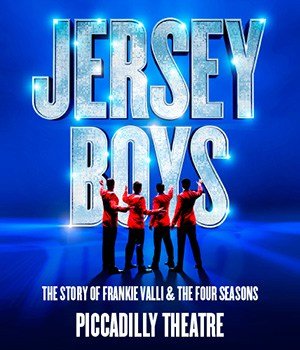 I went as I always do with my mum. It’s our “girly outing”. This particular time I’d upgraded us to some a VIP package (her Mother’s Day present), which I’d heartily recommend if you want to make a visit to the Piccadilly Theatre extra special.

From the moment that Thomas Goodridge bounces onto the top of the staircase with Ces Soirées-La, the energy level for this dynamic slick show is set.

The Four seasons I had for the Saturday Matinee were Sandy Moffat (Frankie Valli) Chris Stoddart (Bob Gaudio) Jon Boydon (Tommy De Vito) and Gary Watson (Nick Massi). Sandy, who I saw in one of his very first performances was an absolute dream to watch. The transformation from those first performances has been nothing short of miraculous. When you only take the part for a limited number of shows per week it can be difficult to get some continuity and strength of characterisation, but Sandy is so talented that it has been an absolute delight to watch him grow and indeed own this role when he performs it.

Chris Stoddart (who is first cover for the absent Edd Post), whose singing voice is sublime, particularly the song “Cry For Me” which really was enchanting. All understudies at this level are expected to deliver an accomplished performance, which Chris certainly did, and more. He and others are the reason why I go to the theatre to enjoy a show, and not to see a “named” performer.

Jon Boydon having completed 5 years plus as the loveable rogue of Tommy De Vito, I felt brought a new aspect of a certain cheekiness to his role on Saturday. I loved his performance, and as his character says “Tommy delivers“, and he does just that every single time I see him!

This was my first time of seeing Gary Watson in the part of Nick Massi. It is a part which I always feel is under-appreciated, perhaps the “Ringo” of the group. Gary is a fabulous addition to this extremely talented cast. Other notable performances for me, were Lucinda Gill (first cover as Mary Delgado) Nicki Griffiths, Matthew Hunt, Matthew Cutts, Simon Adkins and Matt Thorpe.

This is one slick professional show which is on point every time I see it. The music is hit after hit with some surprises along the way. For instance, I remember being amazed that hits made famous by other people were indeed written by Bob Gaudio.

Nominated and shortlisted once again for the Olivier Audience Award, it is easy to see why people return, again and again. Go and see this show if you haven’t already! The cast, the music, the story and the entire experience is one not to be missed.

Think back. Has anyone ever said to you that looks don’t matter, its personality that counts’ Anyone that answered ‘No’ to that skip to the next … END_OF_DOCUMENT_TOKEN_TO_BE_REPLACED

A Streetcar Named Desire might just happen to be on the minds of regular theatregoers in London at the time of writing, on account of the Almeida … END_OF_DOCUMENT_TOKEN_TO_BE_REPLACED

Titus Andronicus is not usually a comedy, it is usually a bloody, villainous and vengeful tale, but tonight it is a comedy and a rather amusing one at … END_OF_DOCUMENT_TOKEN_TO_BE_REPLACED

This show is not without clichés - there are three of note in this production. Firstly, the French horn of the show’s title is personified, speaking … END_OF_DOCUMENT_TOKEN_TO_BE_REPLACED