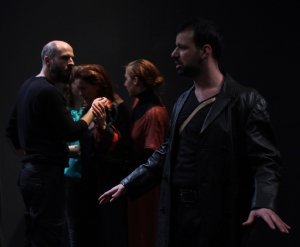 The Tragedy of Macbeth is an intrinsically thrilling and eerie play and it’s no bad thing to be reminded every now and then that that fellow William Shakespeare really could turn a phrase and hatch a plot. The Guardian’s Michael Billington, reflecting on nearly half-a-century of reviewing British theatre, recently noted that, whilst the nation’s theatre has never been more urgent and exciting than it is now, the UK seems to be suffering a bout of acute self-consciousness when it comes to staging Shakespeare and other classics. It is therefore refreshing to behold Gavin McAlinden’s production of Macbeth (running at Camden’s Theatro Technis until 23rd November) in that it distils the essence of this famous tale of sociopathic political ambition with solid dramatisation and intriguing imagery but doesn’t set out to ‘subvert’ the bard nor attempt to do all the thinking for an audience somehow assumed incapable of finding its own parallels.

McAlinden does indicate he wants to nod to the gothic tradition and embrace the conventions of the horror genre, but this is conveyed with a light touch and through tone and styling rather than wholesale revisionism. His idea has strong moments, especially with his drawing of the Weird Sisters, played exquisitely by a rotating cast of actors. Costumed in white nightgowns, as if running off into the night from the imagination of Mary Shelley, the three witches are part-sirens/part-phantasmagorical manifestation of the lust for power – but never cliched crones nor vamps. They giggle and come across as dangerous and mesmerising; but their laughter, whilst disturbing and tinged with madness, isn’t the stuff of hagsploitation. McAlinden’s visual sensibility is strong and he costumes the rest of the cast in contrasting black with touches of leather to give them a non-specific militarised gangland feel that doesn’t torture a visual metaphor but also doesn’t affront our wilful suspension of disbelief.

This production is part of the Acting Gymnasium’s rep and the sense of scene study masterclass is never far from the surface. Michael Claff (Macbeth) and Tracy Coogan (Lady Macbeth) are both strong actors. With Shakespeare’s words fluid and musical in their mouths, they offer commanding and physically-committed performances that are well-tuned to the language’s dramatic grandeur and Theatro Technis’ mid-size studio space. McAlinden is rightly proud of this cast’s 12 nationalities and it is fitting that a multi-cultural team assembles in the storied theatre founded by George Eugeniou some 62 years ago to enact classics and serve and build communities, even if it isn’t his production.

At £15 per ticket, this show is not community theatre and the skill of its lead actors, together with the director’s sense of dramatic purpose, makes it clear this production is a professional endeavour. There is also a sense of excitement in seeing the less experienced cast members who populate the smaller roles emerge. Rylan Beech as Malcolm is not as seasoned or as commanding as Claff but he shows promise, as does Anton Stennett as MacDuff whose stage presence is especially charasmatic.

However, there are aspects of this production that feel more community theatre and let down the haunting imagery. Whilst Claff and Coogan give us stellar delivery, some of the supporting cast look awkward and wooden in both posture and diction and revert to shoutiness too often. Likewise, whilst there is largely a strong sense of cohesion in McAlinden’s production values, there are certain sound effects that make it impossible to know if there is a technical malfunction or if he’s made a choice for a very dystopian industrial interpretation of rainfall. Whilst the cuts to the original script and the staging give this a pacey and attention-retaining feel, the overall sound and lighting design could be used to better effect. The scene change sound effects are so repetitive as to lose their impact as well as hark to the conventions of the horror genre just a little too obviously. Whilst the reveal of Banquo’s ghost is amongst the best I’ve ever seen, there are some questionable prop choices. If the budget‘s restrictions mean the production can only afford a severed head that looks more camp than horror, it certainly shouldn’t be lit so brightly.

Nonetheless, Macbeth is a brilliant play and this is a solid interpretation of it that is accessible for the uninitiated but also agreeable for purists and adventurers.

The Acting Gymnasium return to Theatro Technis with a new dystopian imagining of Shakespeare’s tragedy of ambition, power and the supernatural inspired by German expressionism and modern psychological horror genres.

The role of Lady Macbeth will be played by Irish actress Tracy Coogan most widely noted for her award winning leading role in the comedy/horror film ZOMBIE HONEYMOON, and the psychological thriller DARK WOODS opposite James Russo.