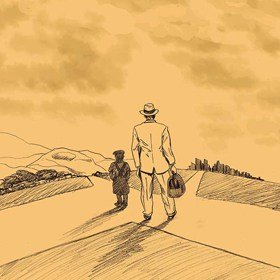 I can understand why, having seen the show, and an updated production for a twenty-first century London audience at that, why Allegro didn’t do very well at all on Broadway. It has a style of self-effacing humour about it that is markedly different from much of the rest of the canon of Rodgers and Hammerstein musicals (the lyrics, unusually, are nothing to write home about, unmemorable as they are), and its ending seemed divisive and abrupt. Divisive, because we see the central character Joseph Taylor Jr (Gary Tushaw) going in the opposite direction to the standard American strive towards the American Dream. Abrupt, because it ends on a cliffhanger – to quote a note in the show’s programme, at a “moment of mid-life crisis”.

Added to this is a bizarre treatment of death, which doesn’t appeal much. After all, when people are gone, they are gone, however unpalatable that thought may be. Here, Grandma Taylor (Susan Travers) remains present, and fully communicative, well after her passing. There is no indication as to whether this is by choice or by design, but it made death an irrelevance, something particularly incongruent when a considerable amount of the story is centred around the medical profession.

The portrayal of Joseph Taylor Jr’s youngest years comes close to being pricelessly farcical. A production does not need to use an actual human infant to take the role of a new-born character, but at least the inanimate baby-shaped object should be held like a real baby would be. It is rocked around almost dangerously by the Grandma character, who also fails to support the head and neck, unless the child is meant to have matured by six months or more very quickly indeed without a scene change or any obvious indication of time progression. A subsequent childhood scene is even worse: I shall spare you the details, suffice to say even a ventriloquist and a hand puppet would have worked better.

Not only are the seating arrangements reminiscent of In The Heights (another previous Southwark Playhouse production) at the King’s Cross Theatre, with the audience sat on both sides of the stage, but the A-frame mobile staircases that are nimbly shunted around are also evident. At times the stage gets very cluttered with up to sixteen actors on stage at the same time, though the large and soaring full company numbers are electrifying to hear, like the Southwark Playhouse productions of Titanic and Grand Hotel previously. The choreography by Lee Proud is praiseworthy, especially given these relatively cramped conditions. The overall fluidity in the scene changes carried over from the original Broadway production suit themselves very well to this pared-down version, and the narrative continues relentlessly, preserving interest throughout.

The chorus often left little to the imagination, a point all the more prominent given the removal of the dances originally included in Act 1 and a truncated dance sequence in Act 2. The deletion of these moments of interpretive dance compounded the sense that there was too much description being given, of both events seen and unseen. The chorus tells Joseph Jr as well as Jennie Brinker (Emily Bull) how to think and behave, and by extension, the audience is instructed likewise. It’s as patronising as it sounds.

The stand out performances came from Leah West’s Beulah (I could have listened to West’s sublime singing voice for hours); her later Mrs Lansdale character was equally absorbing – and Katie Bernstein’s Emily West (look out for her rendering of ‘The Gentleman Is A Dope’). Overall I found no weak links in the casting, and it is also worth pointing out that this production marks professional debuts for Matthew McDonald as Harry Buckley, Benjamin Purkiss as Bertram Woolhaven and Samuel Thomas as Brook Lansdale – all came across as being right at home on stage, brimming with assertive confidence.

It is certainly a bold move to present ‘the professional European premiere’ of this musical. It is worth seeing if you enjoy Rodgers and Hammerstein shows, and/or if you have a penchant for the quirky and unorthodox. Fortunately or unfortunately, though, Allegro is Allegro is Allegro, and not even the creatives of the Southwark Playhouse, wonderful as they are, could quite make it an unqualified success. But at least I was humming the title tune on the Tube home.

n 1905 in a small Midwestern town, the wife of a local doctor gives birth to a baby boy, Joseph Taylor Jr. Allegro chronicles nearly four decades in the life of this average Joe – through his childhood, from college dorm to marriage altar, and on to his own medical career; from the tranquility of his hometown to the hectic din of big city life and a mid-life discovery of who he is and what his life is truly about, ultimately learning the most important lessons of all – the value of family, that money isn’t everything and that home really is where the heart is.

With a gorgeous, epic score by Richard Rodgers and a ground-breaking book by Oscar Hammerstein II, Allegro opened in 1947 to the highest advance in Broadway history. It was hailed as “A work of great beauty and purity” by The New York Times. Almost 70 years later, this extraordinary musical is finally getting its European première.

I have seen some outstanding acting recently at the intimate Finborough Theatre, and this new play is no exception. The highly talented cast quickly … END_OF_DOCUMENT_TOKEN_TO_BE_REPLACED

In the pandemic (remember that?) I worked in adult social care. My role was to help older people in their own homes with daily tasks - I’d cook meals, … END_OF_DOCUMENT_TOKEN_TO_BE_REPLACED

The world-famous Wilton’s Music Hall and the children’s classic The Wind in the Willows make perfect bedfellows. Piers Torday has written a version … END_OF_DOCUMENT_TOKEN_TO_BE_REPLACED

Some journalists get, as it were, a bad press, though some of them don’t help themselves with some of the things they write and do. This play doesn’t, … END_OF_DOCUMENT_TOKEN_TO_BE_REPLACED

Paul (Lewis Bruniges) and Freddie Metz (Oliver Yellop), who identify as cousins, are so desperate to get out of the German Democratic Republic, … END_OF_DOCUMENT_TOKEN_TO_BE_REPLACED