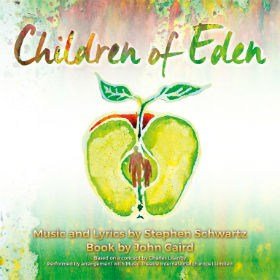 The Old Testament is full of many fascinating stories that really do lend themselves to be turned into plays or musicals. Of course, certain elements of society aren’t impressed with treating the bible this way, but, let’s be honest, they probably aren’t the type to enjoy a good musical anyway which is a real shame as they could be missing out on a gem of a production such as Children of Eden at the Union Theatre.

Taking the book of Genesis as its inspiration, Children of Eden tells two tales from the old Testament. The first is the story of the creation as the Father (Joey Dexter) decides to create the universe, galaxy, solar system and the Earth, on which he creates living beings in his own image and so his children Adam (Stephen Barry) and Eve (Natasha O’Brien) come alive and inhabit the paradise that is the Garden of Eden. All is well and life is idyllic, but Eve starts to question their life and is especially drawn to the one thing the Father has forbidden her and Adam to touch, a tree bearing succulent apples. One day, whilst Father and Adam are in another part of the garden, Eve gets talking to a snake (Gabriel Mokake) who persuades Eve to taste the fruit. When the Father realises what she has done, he orders Eve out of the garden and makes Adam chose between himself and Eve. I don’t think I’m giving away too much to say that Adam chooses Eve and the two of them are expelled into the wilderness where they survive and have a family with their sons, Cain (Guy Woolf) Abel (Daniel Miles) and Seth (Kris Mark Joseph).

Act II moves the story on 10 generations, or around 1100 years to the time of Noah (Stephen Barry), a direct descendant of Seth. The Father has been watching the Earth and is appalled by the way the inhabitants – mostly descendants of Cain – have turned out. He resolves to sort out the problem with one final, catastrophic act and instructs Noah to build a massive ark in which he, his wife (Natasha O’Brien), his sons – Ham (Daniel Niles), Shem (Kris Marc Joseph) and Japheth (Guy Woolf) – along with their wives – Aysha (Samantha Giffard) and Aphra (Susie Chaytow) – will survive. There is a problem though. The youngest son Japheth has not yet taken a wife and he needs to do so before the family can board the ark. Although he has been introduced to many suitable women, Japheth has fallen in love with Yonah (Nikita Johal) a servant of the house and quite unsuitable to join the family. As the time for the Father’s act draws near Noah and his family must chose which direction the family’s life is going to move into.

With a writing pedigree of Stephen Schwartz (music and lyrics) and John Caird (book) anyone who decides to put on a production of Children of Eden is pretty much on for a winner from the start. And this production takes the excellent story and songs and builds a really wonderful and highly entertaining show around it. Director Christian Durham has put a great cast together and, along with Designer Kingsley Hall and Lighting Designer Nic Farman, makes superb use of the Union’s performing area and wonderful lighting rig. The set is multi-level and, although it’s difficult to put into words why, has a really calming feel about it. The costumes were simple and for me evocative of an Amish village in their movement and lack of adornment. And I have to say, the various props, whilst again appearing simplistic in style, were wonderful and full of surprises. My own favourite – aside from the amazing puppets by Darcy Collins – was the hedgehog which I adored from the first moment it appeared on the stage.

Turning to the cast, they were, on the whole first rate. Joey Dexter, in the role of Father truly stood out for me as he went through all the stages of parenthood from excitement at the arrival of his children until that final moment when he realised that, despite his phenomenal cosmic power, he must let his children go off and live their own lives. Equally as good were Stephen Barry and Natasha O’Brien in their roles of Adam/Noah and Eve/Mama Noah respectively. I really enjoyed their performance immensely and shed a little tear at the end of Act I as Eve said farewell to her family. I can’t move on without mentioning Guy Woolf and Daniel Miles who brought Cain and Abel to life beautifully both as children and grown boys. One or two of the cast’s voices were not as strong as they could have been and there were a couple of times when the band, under MD Inga Davis-Rutter, came over them but this was nothing major and could easily be overcome if everyone was mic’d up.

I was quite surprised at my reaction to Children of Eden which really made me think about parental relationships and the fact that we often can’t help but disappoint our parents as we make and act on choices through our lives. Ultimately, this production of Children of Eden is first rate in pretty much every way. The music is excellent – any chance of a soundtrack album from the cast? – and the show itself has been expertly crafted to provide a fantastic evening’s entertainment that is definitely worth seeing.

From Stephen Schwartz (Wicked & Godspell) and John Caird (Les Miserables) comes this heartfelt and humorous musical tale about what it means to be a parent. When we bring our children into the world, all we want is to protect and cherish them. When they then begin to grow up, paradise is never quite as perfect again. The hardest part of love …is letting go.

Handel’s 1738 opera Serse (or Xerxes) is an exploration of power, love and human frailty. King Serse falls in love with the voice of his brother … END_OF_DOCUMENT_TOKEN_TO_BE_REPLACED

Lea Salonga has her fans. She also has some superfans, the ones who yell, “I love you Lea!” at almost every opportunity. If that wasn’t enough, there … END_OF_DOCUMENT_TOKEN_TO_BE_REPLACED

I have no hesitation in saying that the 1952 movie “Singin’ in the Rain” and its 1985 stage version is one of the greatest musicals of all time, … END_OF_DOCUMENT_TOKEN_TO_BE_REPLACED

There are, Maria Caruso was keen to emphasise in a post-show discussion, no wrong answers when it comes to responding to Metamorphosis or even … END_OF_DOCUMENT_TOKEN_TO_BE_REPLACED

Children of the Windrush generation, sisters Dawn and Marcia, grew up in the 1980s. In Roy Williams’ new play Dawn is shown struggling to care for … END_OF_DOCUMENT_TOKEN_TO_BE_REPLACED