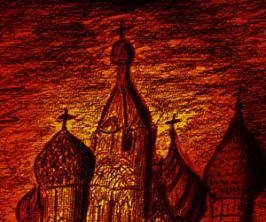 It’s 1598 and Russia is in turmoil. The king is dead and there is nobody to take his place. The Russian people are desperate for a ruler, but who will wear the crown? Enter “Boris Godunov” the, for want of a better word, hero of Alexander Pushkin’s play of the same name currently at the Jack Studio Theatre.

The show opens with two nobles – Prince Shuisky (Brendan O’Rourke) and Prince Vorotynsky (Callum King) – discussing the political situation together and basically providing the audience with a nicely worded synopsis of the events that have occurred up to that point. Boris (David Bromley) doesn’t have royal blood but is married to the sister of the old king, Fyodor I, and has been acting as head of the Regency Council while the king concentrated on spiritual things. Boris is implicated in the murder of the king’s younger brother, Dimitry but may have got away with it. He is a political ‘player’ waiting until desperation sets in amongst the people, forcing the Patriarch (Paul Trussell) to beg him to become ruler so that Boris can ‘reluctantly’ accept the throne.

Far away in a monastery is a young monk who is not happy. Grigory (Thomas Winsor) has come to realise that before he settles fully into the seclusion of holy orders, he would really like to see something of life. He decides to run away from the monastery and head to Poland. The church is not keen on this idea and sends troops out to find him, meaning Grigory has to disappear so that he isn’t dragged back to the life of a devout monk. He does this by getting over the border and working in the household of a Polish nobleman where he reveals that he is not really Grigory but is in fact the ‘murdered’ prince Dimitry who now wishes to take his rightful place as ruler of all the Russia’s. Working with the Polish king, Grigory-Dimitry raises an army and sets off to claim throne by force if need be. But, is Grigory-Dimitry who he claims to be or is he just a former monk whose stories have got out of hand? And actually, does it matter? If the people acclaim him as Dimitry then surely he is, no matter what the truth? Pushkin explores this idea in detail through the course of the 25 scenes in this one act show.

The interesting thing is that when I told friends I was seeing this play, the universal response was a warning that it would be very dull and very depressing (apparently all Russian plays are). They couldn’t have been more wrong. I was hooked from the moment the show started until the final scene. Joint Directors, Scott Le Crass and Sean Turner; have worked wonders in putting on a huge show with a large a cast in a relatively small space. With the exception of Boris and Grigory, all of the other cast take on multiple roles, but this is never confusing and works extremely well as a device to keep the action moving in a fast paced and totally absorbing manner. Use of modern clothing meant there was no need for complicated costume changes to differentiate characters and this was often done by the simple yet effective method of adding or subtracting a hat, scarf, jacket etc. When not directly involved in the action, the majority of the cast was on the stage the whole time observing the events around them. For me this was a bit of a distraction. I would have preferred the non-participating cast to either be off stage or sat perfectly still. That aside, the show was fabulous. One of my favourite parts was the use of a gentle background sound that could have been a heartbeat or a clock ticking down slowly to the end for Boris and Grigory-Dimitry and their final showdown.

Based, however loosely, on real historical events, Pushkin’s writing is a masterpiece and this highly energetic and superb production has really excelled at bringing the show to life is spectacular style.

Moscow 1598. Ivan the Terrible is dead, as are all his sons, and now with seeming reluctance Boris Godunov wears the crown. But word spreads that Dimitry, the prince thought to be murdered, was not truly slain, but is alive and gathering an army to overthrow Russia’s government.

Is it possible?
This chaos?
These threats?
He must be mad!
But his madness is catching.
A madman is roaming Russia like a disease.
Boris Godunov is Pushkin’s greatest play – an epic of civil war, lies, deception, rumours and betrayal.

Playwright in Residence
Howard Colyer’s appointment as playwright in residence continues the venue’s strong association with this writer, who has had nine plays produced at the venue. In January and February 2015, Ballast Theatre will be bringing Colyer’s new adaptation of Boris Godunov to the Jack, and his three original plays Without Reluctance and Without Relief.