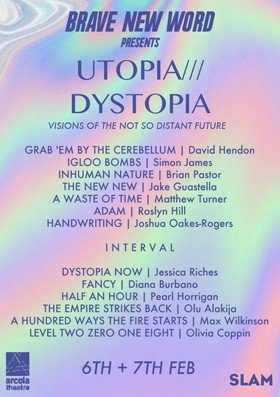 The dystopia came across as more vivid and more prevalent than the utopia in Utopia / Dystopia, a collection of thirteen plays (all of them mercifully short) presented by Brave New Word and hosted by Rory O’Keeffe (yep, double f – his website has this whole spiel about the Irish heritage of O’Keefe / O’Keeffe). O’Keeffe was easy to warm to, particularly in a variation of ‘Would you rather?’ played with a member of the audience. I don’t mean to flatter the guy, but his own routines were firmly in the realm of utopia.

Grab ‘Em By The Cerebellum by David Hendon opens with a barrage of expletives. By the end of the play that is hardly the point, but the observation can’t be helped. The brain of Donald Trump has been taken by a duo (Holly Fry and Gemma Wilson). Precisely how this has been achieved isn’t fully explained, and there’s a need to go with the flow. ‘They’, presumably the police, are after them. Suggestions for a replacement president include Zayn Malik (of ‘One Direction’ fame) and Michael Palin (I’d personally have suggested American personalities, for obvious reasons). They leave the evidence where it is, which sounds bizarre but is plausible in the context of being in a state of panic. A lively piece of absurdist humour.

Igloo Bombs by Simon James was identifiable in the first minute (and somewhat less so as it went on, simply because of the way the narrative plays out). Going for a hot drink with a friend, or otherwise on one’s own, used to mean a choice between ‘tea or coffee’, ‘white or black’ and ‘how many sugars?’ Now, there’s small, medium and large (Starbucks has four sizes), and at a very conservative estimate, a dozen types of coffees to choose from. Frank Tapster (Toby Osmond) has resurfaced after 32 years in an underground bunker, having survived a nuclear holocaust that never actually happened. The world has changed drastically in that time, as the coffee shop barista (Holly Ashman) tries to explain to him whilst being shocked at a cash payment and a paper photograph.
With no hero welcome or post-apocalypse world to rebuild, Tapster’s next move is perhaps inevitable.

Inhuman Nature by Brian Pastor sees Quinn (Kate O’Rourke) interrogating Sonny (David Lenik), a robot who has, essentially, done his duty – that is, to serve and to protect. Johnson (Matt Daniels) takes over after ‘the chief’ has decided to acquiesce to Sonny’s request for formal legal representation, which he’s been categorically told he is entitled to. The circumstances in the play call to mind the trial and conviction of Tony Martin, who was sentenced in 1999 for shooting two burglars, one of whom died at the scene. Frankly, an artificially intelligent creation really ought to have called the police if his ‘master’ was a danger to another human, rather than taking the law in its own hands.

The New New by Jake Guastella takes the word ‘revival’ to another level. A screenplay writer (Rachel Fenwick) has successfully pitched her script to a bigshot Hollywood director (Alexander Grant) and his assistant (Flora Ogilvy). Video technology has, at this point somewhere in the future, become so sophisticated that using previous footage and some clever technological wizardry, they wish to ‘cast’ Marlon Brando in the lead role. The dialogue had this cultured audience in cahoots at the questioning as to whether the best parts should always be allocated to living actors, and the lack of “dead diversity in this industry” was a good send-up of a current ongoing debate. Comical and topical.

A Waste of Time by Matthew Turner sees a man from the future (Dominic Jones) trying to tell a friend (Alex Harvey) all about the friend’s life to come. There is, ironically, insufficient time, for reasons explained in the narrative, to properly explain quite how the future can be altered – or, given that time travel is involved, the past. I liked the premise that “technology catches up with fantasy” but I couldn’t help thinking we’ve been here before with motion pictures like About Time and Back To The Future.

Adam by Roslyn Hill comprises a meeting between Helen (Sophie Barker) and Mark (Jumaane Brown). Helen has submitted an application and paid up for a customised robot that is to function as a life partner. But what Helen doesn’t realise is that the robot manufacturer has made considerable efforts in their product range to make their devices as ‘human’ as possible – in every way. The process of meeting a new sex robot (the term is not used in the play, but that’s essentially what this life-size gadget is) is amusingly compared to skydiving: there is no intention of causing harm to any customer, but, you know, there’s always a slight risk that things could go wrong. I thought the point was made quite convincingly – people can’t be going around wondering ‘what if’ all the time, or otherwise we’d never get into a car because we might crash.

Handwriting by Joshua Oakes-Rogers imagines a world in which all epistolary communication is done through ‘Touchtap’, which I took to be some sort of app. I would assume from the dialogue that things like books and music are exclusively in electronic format in this futuristic world as well. A woman (Kathryn Hopkinson) is typing away whilst her friend (Tom Hartwell) pulls out a ballpoint pen and starts to explain – not wholly accurately – how previous generations used to write things down. The postal service having become obsolete, there’s no concept of putting a letter in an envelope and putting a stamp on it, and the woman does not understand why, having handwritten a letter and physically delivered it to its recipient, a conversation wouldn’t have sufficed in the first place. But the power of the pen in an increasingly digital world could well prove useful.

Dystopia Now by Jessica Riches is a rapidly-delivered monologue, an angry rant raving about a broad range of subjects and everyday observations. Each sentence begins with an expletive, and always the same one. This liturgical repetition left me wondering if Riches’ character was a church bishop or something – it becomes very clear what she is against, but the audience is left with no idea what she supports. The whole thing was spoken so quickly that when there were punchlines, there was no time to react to them, as Riches had moved on already to the next thing to get angry about. The play’s title, mind you, could not have been more appropriate.

Fancy by Diana Burbano continued in this vein, imagining a future in which women’s rights have been pushed so far back that there is a substantial underground movement to smuggle as many young women as possible overseas and out of the confines of a tyrannical regime. A veteran campaigner (Orla Sanders) is already in a prison cell (or is it police custody?) when another woman (Saskia Coomber) is thrown in. A discussion ensues, there are differences of opinion – I would love to see a fuller version of this play: how can they execute their plan of action, and how successful would it be?

Half An Hour by Pearl Andrews-Horrigan considers a situation which I thought unlikely to be plausible at first. With the benefit of some hindsight, it’s quite easy, with heightened vigilance and talk of various terrorist and security threats at any given time, to spook the general public. David Dimbleby is live on air at 3:45am, and normal broadcasting on BBC One has been suspended for an important announcement (that is, given that BBC One reverts to the BBC News Channel at that time in the morning, the news has interrupted itself). But it’s the 1st of April, and presumably, Sky News isn’t running the same non-story. This perceptive play facetiously considers what happens when people believe too easily what they see in a world of ‘breaking news’.

The Empire Strikes Back by Olu Alakija pictures a worldwide scenario where, in an unpredicted twist to global climate change that the forecasts and models didn’t pick up, European leaders are knocking on the proverbial doors of African nations for aid and assistance. A government official (Babirye Bukilwa) meets a British Member of Parliament (Nick Frentz), who appears to be seeking help in a personal capacity. But, the African almost smirks, “We can’t just let everyone in, can we?” before – having already talked about the debt cycle developing countries have been trapped in because of the economic policies of the more privileged nations – speaking about controlled immigration. To laughter from the audience, a points-based system is suggested. “I’m a Cabinet minister!” the white man exclaims. “I know,” replies the black lady, “But what skills do you have?”.

A Hundred Ways The Fire Starts by Max Wilkinson fits the utopia / dystopia theme well – what becomes a nightmare for Moses (Michael Amaning) is bittersweet bliss for David (Max Digby Carpenter) and Shelagh (Jess Nesling). Moses has escaped from a critical incident and is taken in by the young couple, who indulge him in polite conversation. But he touches a raw nerve when he talks about something that has indirectly affected the pair. Even if they have already proved themselves to be thoroughly snotty and dislikeable, it’s Moses who bears the brunt of disproportionate anger, in more ways than one.

Level Two Zero One Eight by Olivia Coppin is set in a laboratory in another universe (maybe), where Planet Earth and its inhabitants are just one of a large number of test groups

being observed. Quite what these scientists (Christina Murdock and William Teller) were testing wasn’t clear, at least not to me, but the observations they make are largely astute. The world ends, as far as they are concerned, due to “self-inflicted termination”, but before that, capitalism and organised religion (amongst other things) are flagged up as defective.

Overall, this was a curious evening, with very nearly something for everyone to enjoy. Intellectual pieces were mixed in with more personal stories, and as far as new writing goes, imagination and creativity continues to be limitless.

‘And indeed there will be time
To wonder, “Do I dare?’ And ‘Do I dare?’
Make no bones about it: looking ahead is baffling. It’s enough to worry about what we’re having for lunch tomorrow, let alone the state of the world in years to come. And look at where we are now: people are investing in cryptocurrencies left right and centre and last year a robot was granted Saudi Arabian citizenship. But our passports are turning blue again, there’s another royal wedding in sight and we’re bringing in the new year with a night out we’ve been to a thousand times before. Are we going back to the future?

It could be a sweet dream or a beautiful nightmare. Speculation is rife, from romantic to downright apocalyptic visions of the future. Will global warming wipe us all out or has Elon Musk got an ace up his sleeve that will save us all?

How can a play be both charming and devastating? Through its tight script, abundant humour and pitch-perfect performances, 4th Country manages to … END_OF_DOCUMENT_TOKEN_TO_BE_REPLACED

Britain, so a London cab driver once told me, is obsessed with the Second World War, as though it happened just recently. Power Luncheon would seem, … END_OF_DOCUMENT_TOKEN_TO_BE_REPLACED

William J Dunleavy, author and star of this monologue play, is a writer and face to watch. He enters the room (as the staging is more geared towards … END_OF_DOCUMENT_TOKEN_TO_BE_REPLACED

Cirque du Soleil’s Luzia is a joyful whirl through a psychedelic Mexico, which reminds us why live theatre is so special. Anyone who goes to … END_OF_DOCUMENT_TOKEN_TO_BE_REPLACED