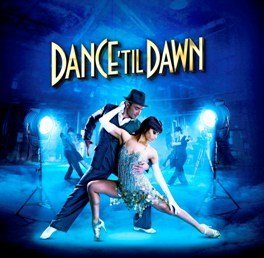 I’m not really a ballroom dancing kind of guy. I have sometimes caught a bit of ‘Strictly’ (only because its followed by Dr Who) but, on the whole I don’t really know a Paso Doble from a Polka or a Waltz from a Quick-Step, and I have personally taken ‘Dad Dancing’ to new heights of cringe worthiness. Anyway, nothing ventured, nothing gained as they say, so off I went to the Aldwych Theatre to see Dance ’til Dawn which has arrived in London for a 10 week run as part of a highly successful nationwide tour. The brainchild of ‘Strictly Come Dancing’ stars Flavia Cacace and Vincent Simone, who co-choreographed the show, with Director Karen Bruce, Dance ’til Dawn is a magical update of every Fred Astaire and Ginger Rodgers movie ever made.

The show took me completely by surprise in many ways. For a start, it wasn’t just a series of exhibition dances by the two stars, with a couple of backing dancers to make up the numbers. There was a story, set in 1940s Hollywood where Sadie Strauss (Flavia) meets and falls in love with Tony DeLuca (Vincent). The story is wonderfully narrated by Teddy Kempner, as a dishevelled private detective, in a brilliant, and at times truly hilarious, Philip Marlowe inspired script. There are gangsters, flappers, and the ultimate Hollywood Moll, Lana (played with a combination of ice-cold bitchiness and platinum blonde vulnerability by Abbie Osman). To cap it all, there is a proper ‘big band’ under the baton of Musical Director Mark Crossland and there are singers belting out so many hits from every era. And it is here that Abbie Osman really shines. Her rendition of ‘Cry Me a River’ is just mesmerising, especially as it comes directly after another of my all-time favourite songs ‘Feeling Good’ sung by Oliver Darley.

The set is amazingly flexible, being everything from the detective’s office, to a Hollywood sound stage to a run-down bedsit to a glamorous nightclub and so on. The various elements of the set are changed around by the cast, often with a cynical comment by our narrator, who ensures that the show really doesn’t take itself too seriously. He continually breaks the ‘fourth wall’ telling the audience directly what is going to happen and commenting on the action on stage. He could have been irritating, but was in fact a highly loveable character with a wonderful turn of phrase. One of my favourite lines from him was “Since my wife left me, sometimes I’m so miserable it’s like she’s still here,” which, delivered in his dead-pan way, had the audience chuckling away. A quick word about the costumes. Yes there were sequins but they were never out of place or just there to create an affect. In fact the costumes were really authentic to the setting of the show and looked simply amazing.

Of course, the main area of interest for virtually everyone was the dancing itself. As I said at the start I’m no expert, but even with my untrained eye it was obvious I was watching consummate professionals at work. The ‘ensemble’ members were superb. Singing, dancing, moving the set about and performing some of the fastest costume changes I have ever seen, at times it looked like there was a cast of a couple of hundred on the stage. The two leads Flavia and Vincent were just amazing and mesmerising. Watching them, it became obvious how much trust dancers must have in each other. They rely on each other constantly to be not only in the right place at the right time, but to have their limbs in the correct position to hold, support or lift. This was just magical to watch. At times, they seemed to move as one across the stage – even at one point being handcuffed together to add to the level of difficulty. Needing no words, they enthralled the audience and grabbed their heartstrings as they told the story of their love through their perfectly synchronised dancing.

At the end of the day, this was a fantastic show, with a fabulous cast telling a lovely story through great songs and many varied dancing styles. It hasn’t made me a complete convert but may mean I switch to ‘Strictly’ a little bit earlier next Saturday night.

Dance ‘Til Dawn
Fresh from wowing audiences across the country with Midnight Tango, Strictly Come Dancing favourites Vincent Simone and Flavia Cacace bring you their sensational new production Dance ‘Til Dawn, a show straight from the Golden Age of Hollywood.

Get ready for an unforgettable evening of timeless sophistication and world class dance, with stunning sets, glamorous costumes and a full live band performing iconic numbers including Feeling Good, Moon River and Stand By Me.

Incorporating big band hits, dance, romance and comedy into a glittering extravaganza, Dance ‘Til Dawn transports you to the seductive city of Los Angeles circa 1940s.

In the midst of a Hollywood film shoot leading man Bobby Burns is murdered and a romance develops between beautiful starlet Saide Strauss (Cacace) and her handsome lover Tony Deluca (Simone). As a plot to frame Tony unfolds, the duo use their flawless footwork and spellbinding choreography to Tango and Quickstep their way out of trouble and into each other’s arms.

Harold Shipman, known to his many patients, family and friends as ‘Fred’, was Britain’s worst serial killer. The official inquiry into his crimes … END_OF_DOCUMENT_TOKEN_TO_BE_REPLACED

Being one of Arthur Miller’s best-made and most challenging plays, The Crucible is also one of his most frequently performed. I was going to say … END_OF_DOCUMENT_TOKEN_TO_BE_REPLACED

To be fair, Linda Lavin called her concert Love Notes, there’s an album of the same name, and that’s more or less what it was about - variations on … END_OF_DOCUMENT_TOKEN_TO_BE_REPLACED

Noughts & Crosses is a euphemism for blacks and whites. The Noughts are the whites and the Crosses are the blacks. In the world of the play, the … END_OF_DOCUMENT_TOKEN_TO_BE_REPLACED

This ‘juke box’ musical offers highly polished, undemanding, feel-good entertainment, showcasing, as it does, 30 songs dating from the 1960s to the … END_OF_DOCUMENT_TOKEN_TO_BE_REPLACED