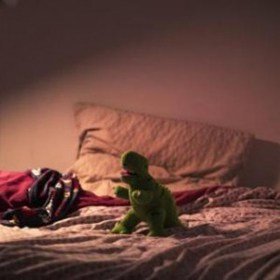 What happens when your perception of reality diverges from the shared experience? Are hallucinations the audio/visual manifestation of past trauma, or the tricks a self-destructive mind plays on itself? When you can’t trust the information relayed through your brain, how can you be expected to trust those around you?

Will Adolphy’s brooding new play attempted to answer these questions, with varying degrees of success, in what is at heart an examination of the treatment of those who question the notion of their own self-hood. After a “psychotic episode” film student Charlie is admitted to a psychiatric ward wherein he is finally forced to confront why it is that he can’t stop hearing the voices in his head. Superficially at least it sounds like we’ve been here before: a well-trodden trope of the intellectual and sensitive arts student (with obligatorily close relationship to mother) who suffers a nervous breakdown when deep suffering from his past is brought unexpectedly to the fore. So far so angsty-teen-drama. But Adolphy’s innovation on the formula is the precise and delicate depiction of those on the periphery of Charlie’s life: the hesitant mother, the earnest psychiatrist, the efficient nurse, and the fellow “inmate” who knows deep down that the only person she’s fighting is herself. These carefully drawn and thoughtfully acted parts who populate the smudged borders of Charlie ‘s reality provide the backbone of the story and ultimately guide the audience in fusing the pieces of Charlie ‘s fractured past. Ella Road as Ruby provides a charmingly nuanced portrayal of bruised adolescence, while Louise Lingwood ‘s wordless realisation at the climax of the piece is well worth seeing the whole show for.

Sam Glossop is also due quite considerable praise or his deft sound design, which beautifully captured the feverish and chaotic world of a mind in rebellion. Charlie’s deterioration and Ruby’s visceral dreamscape both benefited from Glossop ‘s elegant touch, enmeshing the tangled fringes of hallucination and reality.

As set out in the programme, the play’s remit is both to offer insight “into the mind of someone grappling with a fractured past”, and to assess the stigma attached to discussions of mental health. In this, however, Adolphy (who writes and directs) has not been entirely successful, and the play still has a little way to go to find its feet. The emotional tension is ramped up so high from the outset that the characters are left with very little emotional range to explore for the proceeding hour of action. Sadly this was no where more clearly illustrated than in the final revelation of the play, which felt more like the hurried admission of something the audience had already guessed, than the climactic and emotional disclosure of the final piece of the jigsaw.

Ultimately this is a play that has bitten off not more than it can chew, but more than it dares to. There is no doubt that Adolphy and his team have all the elements needed to create a genuinely engaging and extremely inventive addition to the canon of psychological theatre, but they must trust the material and the audience more than they so far do. Watch this space.

After a ’psychotic episode’, Charlie, a self-confessed film fanatic, is hospitalised. Thrown into a world of medication, therapy and daytime TV, Charlie is forced on a journey of self discovery.

There’s a warm and welcoming presence about Katie Arnstein anyway, although offering a sweet to audience members as we filed in helps too. Also, the … END_OF_DOCUMENT_TOKEN_TO_BE_REPLACED

The on-stage tiling makes it feel very much like certain scenes are set in a swimming pool, which may be stating the obvious but in a performance … END_OF_DOCUMENT_TOKEN_TO_BE_REPLACED

“I am a little bit of a nerd,” smiles Joe Sellman-Leava, playing himself, or at least a version of himself he’s willing to portray to audiences at the … END_OF_DOCUMENT_TOKEN_TO_BE_REPLACED

This is the kind of show that will preach largely to the converted, if not the choir itself, although this is probably by default rather than design. … END_OF_DOCUMENT_TOKEN_TO_BE_REPLACED

Cabaret is not just the name of a highly successful musical and film, but according to my good buddies at Wikipedia is a form of theatrical … END_OF_DOCUMENT_TOKEN_TO_BE_REPLACED