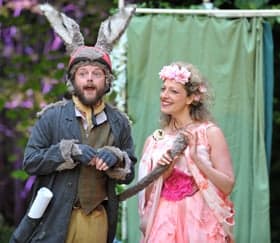 It had been an extremely hot, uncomfortable day at work but early evening in Racks Close is shady and cool, just perfect for an outdoor production. My sister and I enjoyed our picnic on the lawn together with locally sourced gin and tonic. Could it get any better than this?

Director Lotte Wakeham has set this production in Guildford in 1967 the Summer of Love. Theseus is the Duke of Guildford. The four lovers are students at the University of Surrey and the Mechanicals are the amateur dramatic society from the local Dennis factory.

The action takes place on three different stages and the audience follow the cast from Guildford into the Faerie Kingdom in the woods and then to the wedding celebrations at Theseus’ court. The natural beauty of the woods of Racks Close is made eerie and magical by the clever use of fairy lights and purple spotlights amongst the trees. Sixties music is used throughout to accentuate the drama and add to the general atmosphere.

The small cast are incredibly versatile playing several parts and giving a distinct character to each. It is a delight to watch Owen Oakeshott transform from the pompous, verbose Theseus into the charismatic, hippie Oberon. Owen Findlay is so eloquent and charming as Lysander and a very convincing gum chewing amateur actor as Tom Snout, I had to check my programme to make sure it was the same actor. Matt Pinches is the best Bottom I have ever seen, and I have seen quite a few over the years including same very famous names. The physical foolery with his sword while rehearsing with the other actors is very amusing. Guildford Shakespeare Company are brilliant at slapstick comedy and I particularly enjoyed Lysander and Demetrius (Jack Whitam) courting of Helena (Meghan Tyler) and rejection of Hermia (Alisia Joy) but I would have attended this production just to see the play within a play “Pyramus and Thisbe”. Peter Quince’s (Paul Trussell) introduction is great. Bottom’s overacting is hilarious; Flute’s (Jack Whitam) scouse Thisbe is side-splitting! Snug (Meghan Tyler) the most timid lion I have ever seen in rehearsals triumphs in the production with a bit of Dutch courage and I have never seen anyone make playing the part of a wall (Owen Findlay) so amusing.

The predominantly teenage audience were enthusiastic throughout and in stitches during “Pyramus and Thisbe”. Quite brilliant, I would never miss one of GSC’s comedies; I might go to this one again.

If, like me, you’ve lost track of how many cast biographies in theatre programmes you’ve read over the years, an actor thanking their family for their … END_OF_DOCUMENT_TOKEN_TO_BE_REPLACED

Many people can relate to Everything Is Absolutely Fine on at least some level, whether it’s Alice Keedwell (as herself, or at least, a dramatized … END_OF_DOCUMENT_TOKEN_TO_BE_REPLACED

Lockdown: theatres dark; audiences shunned; creativity on hold. And: "No-one’s seen anyone in ages. Not just you.” Enter - or should I say exit … END_OF_DOCUMENT_TOKEN_TO_BE_REPLACED

The comedy value in this episode of The Seth Concert Series was off the scale. Christine Pedi has done several productions of the Forbidden Broadway … END_OF_DOCUMENT_TOKEN_TO_BE_REPLACED

The album for this show, I Could Use A Drink, was released in 2013 but there were nonetheless moments when it felt very much like the show was written … END_OF_DOCUMENT_TOKEN_TO_BE_REPLACED