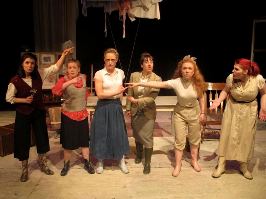 This play opens with its ending, yet that is not how it ends. The audience enters onto a set where six mad, beautiful women, one called Oscar, are arranged in a variety of death poses. The six sisters, the youngest ten at the time, had fled a world that had disintegrated into economic and technological chaos. They moved into a cottage on the edge of a cliff and we meet them as their food supply finally runs out. There is cannibalism, fratricide, and above all humour. This post-modern existentialist drama has them all. Imagine the child cast of Matilda stuck in one room with a crazed choreographer for ten years, and you’ve got the idea.

We all know the experimental fringe productions where sparse audiences clap politely as fresh drama school grads throw themselves with stagey enthusiasm into less than adequate scripts and directions. Climbing the concrete stairs to the warehouse-style loft in the middle of noisy shouty Peckham Rye where the award-winning Haste Theatre is presenting Beyond Cragporth Rock, I feared the worst. And for the first time, I was having to award stars for a review on this site. Oh woe.

These fears proved groundless. The house was full. As we walked in, the set immediately grabbed our attention, demanding to be noticed and examined. Countering the current trend for minimalism, it was complex and multi-faceted. Yet everything, no matter how small, played its own part, like a Swiss watch. Every single item was a character in its own right, while the actors themselves would at times be “frozen” in time, as the set took over.

Perhaps that is because “movement” is so integral to this play. The script was well-written, beautifully-so in parts, although some of it could have done with a little tightening. But any minor flaw there was more than compensated for by the whole. The cleverness of the movement and dance direction, the haunting use of song and harmony, the utterly brilliant technique with which the change-bringing wind was represented, was breathtaking. The actors, trained in physical theatre at the top schools as well as dance and drama, worked closely with director Ally Cologna and designer Kate Rigby in bringing the concept to this stage. It was first developed at St Mary’s University as part of its masters in physical theatre, and it is possibly that intellectual integrity at the heart of it, the sense that everything has a valid reference, that it all “goes somewhere” in spite of staying in the same place, that renders it so strong and dynamic.

The plot seems simple, but actually contains many complexities around family relationships, growing up, hunger, harmony, the will to survive.

Although we think we are seeing the end at the beginning, in fact we are not. I won’t spoil it for you but it was genuinely shocking and dramatic, powerful and emotional, awful and beautiful. Catch it if you can, before the terrible end.

Beyond Cragporth Rock
Beyond Cragporth Rock invites the audience to join a rollercoaster ride of bleak laughs and horror. The lights rise upon a bizarre sprawl of bodies. Six sisters, living in a ramshackle cottage on the edge of an eroding cliff, explain differing versions of their mutual demise. Beyond the four walls lies a nightmarish, futuristic world plunged into dystopia by economic crisis. Afraid of the outside, the sisters live in constant fear of faceless foes and unspecified attacks. Here we find them ten years later, fresh risen from their own deaths to tell their bizarre, back-to-front story.

A nerve-jangling, one-act tour de force, Beyond Cragporth Rock comes with a capella harmonies, clashing egos, murder and a few surprises along the way..

Haste Theatre
Based in London, Haste Theatre is a young, all female, international theatre company which shares a passion for simple, innovative and creative storytelling. They make physically devised, original work that is light and humorous in nature, yet which remains grounded in questions of humanity. Haste Theatre has toured shows in both the U.S and Europe. As well as their multidisciplinary performances, they also offer a creative learning programme through workshops in schools, colleges and community centres.

Everyman is one of the earliest printed plays, originally written in Middle English and first performed around 1510. It is a morality play, popular … END_OF_DOCUMENT_TOKEN_TO_BE_REPLACED

After being closed for over two years due to covid, the Arcola Theatre has re-opened with Barney Norris’s love song to the people who raised him, We … END_OF_DOCUMENT_TOKEN_TO_BE_REPLACED

Now in its 15th year, La Clique have firmly established their place on the world burlesque circuit and this year’s London cast bring their infamous … END_OF_DOCUMENT_TOKEN_TO_BE_REPLACED

Warm, funny and lacerating, Satinder Kaur Chohan’s new play opens with a fly-on-the-wall look at the daily attempts women make to be accepted and … END_OF_DOCUMENT_TOKEN_TO_BE_REPLACED