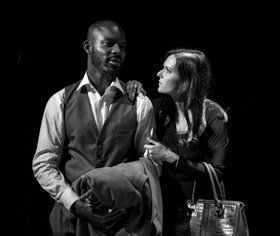 The Woven Voices Theatre Company has set out to use the “transformative power” of performance to shed light on and give a voice to the marginalised members of our society. As such, in Bruises, writer Nadia Cavelle offers us two portraits of best friends Banana and Jacqueline, both drawn from the underbelly of society and trying to make the best of their respective bad situations. Within the broader context of a fervent feminist discussion that dominates dining-room table conversation from Balham to Chelsea, this play slots nicely and politely into place. Nevertheless, it is hard to know if the writing ever delves further than the skin-deep bruises of the play’s title.

We are beckoned into the world of high-class prostitution by the shadowy figure of Damian, a self-styled “warmth-collector” who tells us that the reason he sleeps with people is because he loves to experience other human beings’ warmth. And it is with this in mind that the play charges headlong into the messy and chaotic lives of two ill-fated bosom-buddies: one of whom pursues the high-life as a modern-day courtesan, whilst the other pieces together a fractured love life with the one man who might see in her what she can’t see herself. Fundamentally, all that these girls are looking for is a little warmth in the night to keep out the cold, as they toss and turn under stage-wide bed sheets that are strewn about the playing space. Both characters are trying to define themselves as ‘women’ – whatever that might mean in the 21st Century. We chart the rise and fall of Jacqueline as she uses her womanhood the best way she knows how.

Meanwhile Banana – the child-gymnast superstar forced to retire early because of injury – uses her own body to validate herself in a more conventional way: with a boyfriend. By the play’s climax both are left wondering whether their particular brands of ‘feminism’ haven’t been as toxic as the other’s.

The real triumph of the show is that it is a superbly acted ensemble piece, showcasing bright young talent emerging on the London theatre scene. James Barnes’ Damian is a brooding and dangerous presence on stage, a voyeur in the gloom, watching the scenes unfold with the stoicism of an old hand at the oldest profession. Lily Knight offers a beautifully arch and caustic pimp in Mona: simultaneously world-weary and fragile, a no-nonsense madam who has learnt to deftly powder over the cracks. The role of Jacqueline – rechristened ‘Carla’, the high-end sex-worker – is captured with startling intensity by Eva-Jane Willis, who lifts her portrayal of the ‘hooker with a heart of gold’ beyond any performance of this well-trodden trope the audience might have seen before.

Cavelle’s play must be applauded for trying to deal with issues that remain a taboo in our society, most likely because – at its most fundamental – the transaction of sex for money is one that still makes people feel peculiarly uncomfortable. However, what her writing highlights is that the other trade-offs we make as functional members of a functional society are just as discomforting, if only we had the temerity to recognise it. Cavelle points to the frustrated chef who trades in on his dreams in order to get a high-paid salary as a lawyer; or the ‘daughter of wealth’ whose mother’s bedtime story is a promise of suicide “if only she had the courage”; or the comparative literature professor who zealously maintains he is a feminist while cheating on his wife and three children. Behind closed doors we all make contracts that should make us peculiarly uncomfortable, and yet – perhaps quite simply because they conduct their business in the open – it is prostitutes who bear the brunt of our disapproval. Although at times the writing veers into cliché and the characters can seem crudely drawn, the actors ensure that it remains an emotionally charged piece of theatre well worth a watch.

Fallen gymnast Banana and sex worker Jackie have been best friends for ten years and have gotten nowhere. One day, Jackie meets Mona, a high-class pimp who promises her the world. Left behind, Banana decides to give love a try and moves in with high-achieving lawyer Justin. As both young women attempt to start afresh, life insists on making it quite impossible for them to stay apart.

Nadia Cavelle’s debut play is a playful yet thought-provoking dramedy about identity and sexuality. It explores the still hugely taboo topic of sex work in the hope of opening up a more informed and compassionate dialogue.

This happens to be a timely production: employment has hit the headlines again at the time of writing, this time because of the concept of ‘quiet … END_OF_DOCUMENT_TOKEN_TO_BE_REPLACED

An opera (well, technically, an ‘opéra comique’, as there is spoken dialogue) in a relatively small space like the Charing Cross Theatre calls for … END_OF_DOCUMENT_TOKEN_TO_BE_REPLACED

Shoes, one would have thought, are fairly recession-proof. The problem for Charlie Price (Joel Harper-Jackson, reprising the role he previously played … END_OF_DOCUMENT_TOKEN_TO_BE_REPLACED

The descriptions of what happens in this show are so vivid that paradoxically they leave nothing to the imagination – and, at least at the performance … END_OF_DOCUMENT_TOKEN_TO_BE_REPLACED